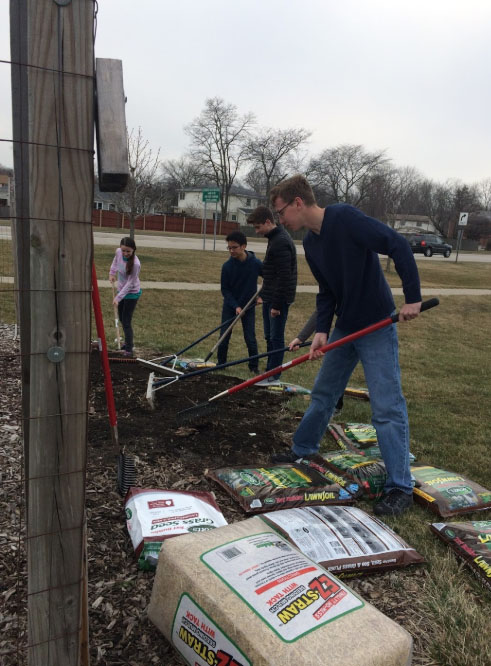 GREAT GREEN GARDENERS: Raking some dirt, South students work in the gardens at the annual Great Green Gardening Gathering. With the help of Key Club, Gardening Club held the event after school on April 5. Photo courtesy of Marina Madsen

The 3rd Annual GBS Gardening Club Great Green Gardening Gathering took place with the help of Key Club on April 5. For two hours, students worked outside on nine projects, and concluded the event with a pizza celebration.

The event focused on preparing for the upcoming planting season, rather than actually planting plants, according to Jenny Friedmann, Gardening Club faculty advisor.

“So much of what makes a garden successful is the preparation and heads-up work you do,” Friedmann said. “That’s the valuable work we [did at the event].”

Friedmann said there were nine work crews, and each work crew had a different task to complete. Some examples of the jobs that work crews did at the event were putting down mulch around the gardening club pumpkin patch, preparing pumpkin patch beds with fertilizer, planting grass seed and digging out a bed for strawberry plants.

According to Marina Madsen, Key Club co-environmental committee leader, within the three years the event has existed, it has expanded from one work crew to nine.

“The initial year I went, the project was just the donation garden,” Madsen said. “That was really simple and it was just one project. This year we have nine, so it totally expanded.”

This was Madsen’s third time attending the event, and this year she was in the work crew that seeded the west side of the donation garden.

“I helped with breaking up the dirt and seeding the grass because there had been an ugly dead grass spot there,” Madsen said. “We seeded it and put hay and straw over it to keep it down.”

Dasha Raguimov, Gardening Club member, attended the event for the second time, and was in the berry patch work crew this year.

In addition to the added work crews, the amount of people at the event also grew. Madsen says that on each work crew there were about seven-15 people per team. With the current rate of growth, in the upcoming years the event is going to keep improving and expanding, according to Madsen.

“In the classroom where we were meeting, it looked like Ms. Friedmann was giving a lecture,” Madsen said. “All the seats were filled. There were people in the back and people on the floor; [the event] is expanding rapidly.”

According to Raguimov, with more people at the event it enables there to be more projects, overall increasing the amount the event can accomplish.

“When we have this big event you can see the difference with having so many different members helping out,” Raguimov said. “It really gets you to see teamwork and a group of people working well together to get a goal done.”

Because of this year’s success, Gardening Club is already thinking about potential projects for next year’s Great Green Gardening Gathering, according to Raguimov. One possible project that might come to fruition next year is weeding out the water drainage area and planting new plants to replace the weeds, Raguimov says.

“The area outside of the greenhouse is very limited because most of it is on the hillside and most of the lawn is a water drainage area covered in weeds,” Raguimov said. “So, one of our future projects that we need administration to help us out with is weeding out that area and putting in prairie plants there.”

Although the motives for why people attended the Great Green Gardening Gathering ranged from person-to-person, people that attended the event were exposed to new people that shared an interest in gardening, says Madsen. Friedmann agrees with Madsen that the group of passionate students is the best part of the event.

“[My favorite part is] hanging out with these kids,” Friedmann said. “I would [prepare for the planting season] if nobody was here doing it with me, but getting to meet other people who enjoy it too [is special].”