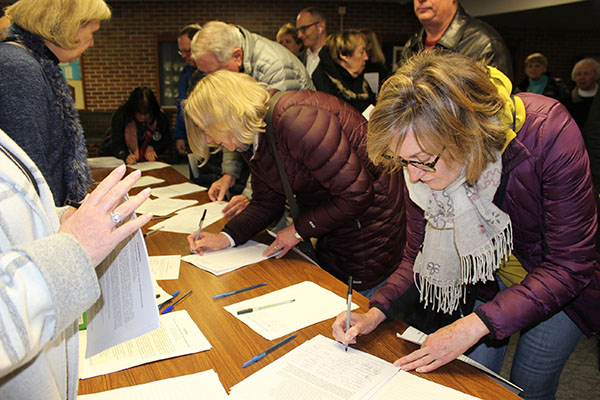 FIGHTING FREIGHTS: Signing a petition at a public forum held in the Watson Auditorium, Alliance to Control Train Impacts on Our Neighborhoods (ACTION) committee members express their opposition to the building of a new Amtrak freight train line. Local residents have voiced their concerns about the impact it could potentially have on Glenview neighborhoods, GBS, and the environment. Photo courtesy of The Village of Glenview

On March 12, 1,200 people attended a public forum held by the Alliance to Control Train Impacts on Our Neighborhoods (ACTION) committee at South’s Watson Auditorium to educate, spread awareness and hear concerns about the Hiawatha proposal, which can negatively affect the community including South, according to Bill Attea, resident and secretary of ACTION.

The Hiawatha proposal by Amtrak seeks to build a rail line from Milwaukee to Chicago, running through Glenview across West Lake Ave. While ACTION, formed by concerned residents, does not oppose Amtrak, they are opposed to Amtrak’s plan of building a freight line, Attea says.

“We’re supportive and really would like to see improved transportation services,” Attea said. “Our objection is to use that proposal to bring [freight trains and] … create environmental issues, safety issues [and] quality of life issues for the residents of the community.”

Gary Dubofsky, resident and representative of Willows subdivision, mentions that the initial Hiawatha proposal focused on the commuter aspect of Amtrak, yet Dubofsky says Amtrak is now seeking to build a freight train line along West Lake Avenue.

“[Our big issues come in] when [Amtrak] starts parking freight trains that are two miles long, idling with no designated time limits directly in the backyard of residential neighborhoods,” Dubofsky said. “We have been continuously pushing for a freight evaluation of this project and an environmental impact statement with regards to freight because that is going to have the largest detrimental effect on our community.”

Attea says the train now takes about eight to 12 minutes to pass, but the train on the potential holding track will take about 20 to 25 minutes. Chuck Ballinger, resident and president of Princeton Village Association, says GBS students will be affected due to heavy traffic.

“If you think it’s bad getting to school now in the mornings or when you leave, this is going to be a lot worse because you are now going to be competing with freight trains that are going to be slowly starting off, making noise and blocking off West Lake,” Ballinger said.

Dr. Michael Riggle, superintendent of Glenbrook high schools, agrees with Ballinger and says noise will also be a disturbance.

“Anything that slows down [traffic] or noise traffic on West Lake Ave is going to be detrimental to Glenbrook South,” Riggle said.

According to the ACTION public forum powerpoint, freight roads have benefits such as affordable freight transportation, global competitiveness, fuel efficiency and less crowded highways. However, Jeff Brady, Glenview community development director, notes that the Hiawatha line only benefits Wisconsin. The Oracle was unable to reach Amtrak officials to comment on this story.

“[The Hiawatha commuter rail line] is primarily funded by the Wisconsin Department of Transportation,” Brady said. “But all of the major impacts are happening in Illinois. [The] ACTION group is saying that there’s numerous alternatives that are not banded solutions but are long term solutions to making freight rail more efficient. They’re glossing over [environmental issues and long term benefits of separating freight-passenger] to get a very short term benefit not even for Illinois but for Wisconsin.”

Attea says the two possible alternatives for the freight trains are relocating the tracks or putting more cars on the current Amtrak line.

“Amrak is running at 40 percent capacity right now and 60 percent of their seats are empty,” Attea said. “If they put one or two more cars on each of those trains they will be able to alleviate it. But they look upon that as just as short term and it will cost $2 million. Well, $2 million is not anything compared to the $200 million they’re going to spend if they put this project in place. So there’s a lot of things we feel that has not been looked yet … and we feel that the residents of Glenview deserve more.”

By informing GBS students, Dubofsky hopes  the word will spread and that more people will be aware of the issue.

“[Students can have] conversations with their parents and engage them if they’re not aware of it,” Dubofsky said. “If they are already aware of it then they can open up the dialogue and continue to spread the word and the awareness through the community and take action.”

Attea says because the Hiawatha line could negatively impact students, he hopes students join and participate in the ACTION committee.

“We really do think that students should be engaged by being knowledgeable of the issues because you’re the next generation,” Attea said. “You’re the generation that will suffer the most from this. Most immediately because of the environmental [factors], but long term if you live in Glenview [after college].”

“It’s going to affect you and your kids,” Attea said. “We just think that it’s the wrong thing to do. And most of the people that were around this table are people that are more interested in the future of Glenview and maintaining it as an A+ community in which to live.”