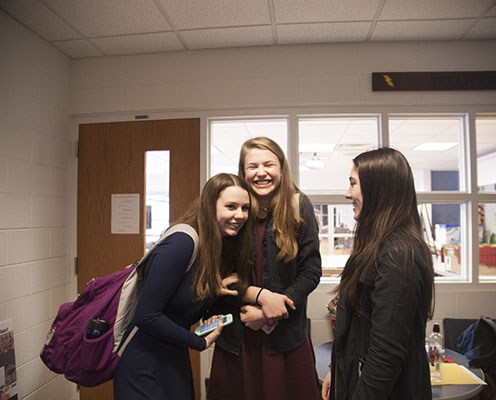 A change to the structure of Student Council Executive Board elections was implemented by Josh Koo, assistant principal in charge of student activities, for the March 13 election, despite dissent from members of Student Council.

Koo says with the new ballot, candidates could choose to run for all positions. If a candidate preferred to run for a single position, however, he or she was able to do so. Koo explains that if a candidate were to win multiple races, he or she would automatically be named to the highest-ranking position: president, vice president, secretary or treasurer.

Koo says that with the new voting system, he intended to create more opportunities for students.

According to Koo, his final decision to put this change into effect was not made lightly and without proper input from Student Council and others.

“This is not an impulse decision by any means,” Koo said. “We’ve been looking at various options from what other groups, organizations and countries use to elect their elected officials. And [as I’ve said the ballot change] might not be the best option because that is how I approach every single decision I make. There could be issues with that and that’s why I take value in conferring with current student body members, teachers, other administrators.”

Koo says he gathered input from Student Council members before implementing the change.

“I think [the new policy] is a bit idealistic and the rationale behind it in trying to construct the most efficient and dynamic executive board is great reasoning,” Grant said before the election. “However, I think that it may be problematic … [if] votes are split [for one person over multiple positions] and [positions] don’t go to certain people because of that.”

Dr. Jim Shellard, who retired from the assistant principal of student activities last year, explains he never changed the way elections ran during his tenure in part because of the Student Council Constitution.

Specifically, Shellard pointed to Article VII, Section 2 of the Student Council constitution, which states, “Student Council shall have sole authority to regulate Council and Class elections as to dates, eligibility requirements and procedures.” Additionally, Article III, Section 2 defines the term “Student Council” as a student organization without mention of an adult supervisor or sponsor.

“I had no power,” Shellard explained. “Student government is run by the people, for the people. The student activities director can’t just change the constitution. It has to be voted on.”

According to Shellard, the phrase “Student Council” in Article VII, Section 2 refers to all of the Class Officers and Executive Officers. Koo says he believes “Student Council” refers to the adults who oversee the student government. However, those adults should pursue input from council members, he says.

According to Grant, learning about this specific regulation in the constitution supported her opinion that students should make the final decision.

“For any club, student leaders carefully make these decisions with the advice of an adviser, and this is how we grow as leaders,” Grant explained.

Junior Kate Gregory, student body president-elect, said, “I would have preferred just keeping the election how it would have been before, I think it would’ve been nice to have Mr. Koo take the idea for the new system to a vote across Student Council so we could decide for ourselves,” Gregory stated.

According to Koo, the purpose of the March 9 meeting was to allow for Student Council members to provide additional input to himself and Chris Hilvert, Senior Class Board sponsor.

According to Koo, he saw the vote as a mechanism to receive feedback about what students felt, rather than a vote to make the final decision. An absentee form was also provided for students who were unable to attend the meeting and the feedback received on that form was different from what was received during the actual meeting, Koo says.

“[The vote taken during the Student Council meeting] gives us feedback on how students feel [about the change],” Koo stated before the election. “A lot of the concerns were either communication process, which doesn’t have to do with the [election] process itself, or concerns of hurt feelings.”

After the meeting, Koo said that he was going to further discuss the change with the faculty sponsors of each class as well as with other administrators. On March 13, Koo announced the final decision to implement the change to the ballot. He sent an email with a letter attached to Student Council to inform them of the decision and to explain the reasons for it.

“We, as the caretakers of the Student Council, past, present and future, while acknowledging dissenting opinions, believe [the change] allows for more inclusion and positions us better for the future,” Koo wrote.

Koo expresses in the letter that most of the time the students have the authority, but as the sponsor of Student Council, it is his rightful duty to evaluate the decisions so that there is a positive outcome.

“Nine times out of 10 we will allow your decision to pass,” Koo wrote. “However, Student Council does not have absolute sovereignty. There is no student group, team or organization at Glenbrook South (or any other school for that matter) that allows for student votes to override the decisions of the overseeing adults. We, as adults, have to keep in mind the effect of decisions beyond your time here at South as well as the scope of precedent that it invites.”

Although Koo has implemented the change, he says he is willing to help address the problems that were discussed at the lunch meeting.

“Several opinions expressed in that discussion, as well as in prior conversations, were in direct contradiction of those two goals,” Koo said. “This means I, personally, have to do a better job of promoting and advocating for equity in Student Council.”

Ornduff, who ran solely for Secretary, says she still does not fully support the new voting change despite her victory due to the possibility of candidates splitting their own votes.

“You’re honestly running against yourself,” Ornduff said. “I think that could prevent people from getting a position.”

Grant says she believes the Executive Board did their best to facilitate a meeting that allowed Student Council members to express their concerns.

According to Koo, if the change does not end up reaching its goal to have the best possible Executive Board leading the school and promoting inclusivity, he is open to exploring more changes.

“I don’t want to give the impression that this [change to the election process] is going to happen and I’m just going to kick my feet back and say that this worked,” Koo said. “[I] always try and be reflective and find ways to improve.”

*All students of the Journalistic Writing class contributed to this report.