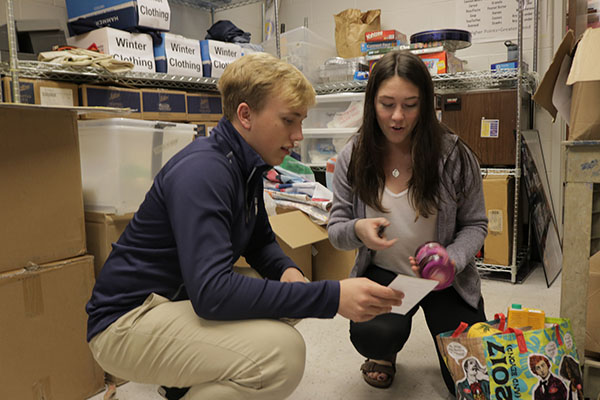 Sorting cans, senior Abby Grant, student body president, and junior representative Matthew Baumstark work to box donations from students and staff. This year, instead of accepting both money and cans, Student Council is moving toward only food donations.

GBS Student Council replaced the numerical structure of the Canned Food Drive from a dollar being worth four cans to a hierarchal point system to restore values of humanity and service back into the annual event, according to Abby Grant, student body president.

Despite the new approach, the Canned Food Drive will continue to give all donations to the Northfield Township Food Pantry, Onward House, and Vital Bridges,  Grant says. This year’s theme, “Can’t Stop, Won’t Stop,” as voted on by Student Council, will also aid in publicizing the event to students and businesses in the community.

According to Josh Koo, assistant principal of student activities, the point system originated at GBN. The GBS executive board felt that GBN’s system of giving out three points for the items in highest demand, two points for foods that weren’t as essential for the families, and one point for items deemed unnecessary, should be mimicked. There will be a competition between grade levels and gold one classes, Koo says.

“We don’t want to say we raised 130,000 cans and pride ourselves on it, when half of those were items that the food pantry really didn’t need,” Koo said. “We thought we could incentivize it so that students would want to bring in more points for the grade-level competition, and as a result, bring in more items.”

Jill Blackwell, elected supervisor shared that the pantry actively serves 556 households at the moment, which equates to about 1,600 people who utilize their services on a monthly basis.

“This isn’t helping strangers or people in a far off land,” Blackwell said. “When I talk to kids, I always ask where hungry people are, and Africa is usually the first answer. They are always startled to hear [hungry people] live right here.”

According to Koo, about one-fifth of GBS students use assisted lunch, a discounted lunch for students who can’t afford to buy a lunch every day. Because a portion of students utilize these aids, asking students for a monetary donation would be counterintuitive, Koo says. Student Council will still be collecting money from parents, communities, and businesses, but are asking students to only bring in cans.

“What students have is time and if one of our main goals is to provide a service opportunity for them, we should do something they can add to,” Koo said. “It’s one thing to ask your mom for a check and another thing to … take that check to the grocery store, pick the cans from the high needs list, and bring them in.”

Koo stresses that nothing should be takenaway from past successes, and that the change should be treated as an enhancement to the old system.

“They served a great purpose, had a lot of people excited, got the community involved, and helped an overwhelming amount of people,” Koo said. “Now, we know we’ve run successful drives, [but want to concentrate on] how to make them even more intentional, meaningful, and focused.”

Still, Grant shares her excitement over the new changes and believes that they will be a well-timed and equally successful follow up to this year’s new Homecoming dance.

“This year is a really great year, being Mr. Koo’s first year as the assistant principal of student activities, and a great [opportunity] to start changing things up and to set a [new] precedent so … classes to come can build off what we’ve changed,” Grant concluded.