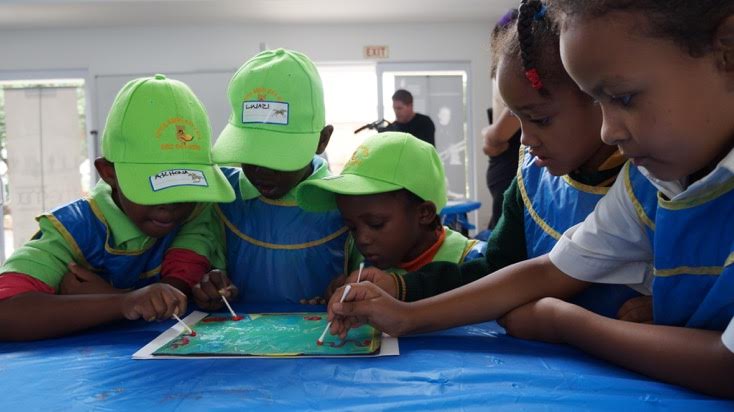 Play Africa, a non-profit company (NPC) and social enterprise, is building the first children’s museum in Johannesburg, South Africa. Wanting to be involved, GBS alumni Trisha Siegel moved to Johannesburg to become the Director of Business Development for Play Africa after finishing college in 2010.

According to Siegel, [Play Africa] is going to be more than a children’s museum. It is going to be a transformative space and a treasured institution that brings people together from across South Africa, she said. Siegel moved to Johannesburg and began working for a Safari Lodge with the benefits of getting to know the culture and the language of the Shangaan people living in the southern part of Africa.

“I loved working with the community and learning about African leadership,” Siegel said. “I moved to Johannesburg three years later and met Gretchen Wilson Prangley, the founder and CEO of Play Africa.”

According to Siegel, working with the community was very important to her. She said she is a people person and loves languages as well as learning about the people who speak them.

“I am in an incredible environment filled with amazing people that I learn from every day and together we are working hard to create an iconic space for children in our city,” Siegel said.

“The next difficulty is trying to advocate for children’s right to play and the importance of quality early childhood development,” Siegel said. “Neuroscience continues to prove the critical need for early learning and stimulation to build a foundation for a child’s lifelong learning. We need to make sure that access to early childhood development experiences is a priority.”

According to Matt Whipple, GBS STAND for Peace (STAND) sponsor, Play Africa plans to use children to spark conversation between members of color throughout the community. The organization is eliminating the social constructs while children play and learn in an encompassing environment.

“What Trisha is confronting in South Africa is how to bring very divided and unequal groups of people together in a safe space [where] they can understand each other, get to know each other and be comfortable being in a community together,” Siegel said.

After meeting Prangley, at the early stages of conceptualization, Siegel knew she wanted to be involved in building the children’s museum together.

“I grew up climbing, painting, exploring and laughing at Kohl Children’s Museum when I was little and these were some of my fondest memories of my childhood,” Siegel said. “And that was the ‘aha’ moment.”

Play Africa is part of the Association of Children’s Museums (ACM) along with 350 established museums worldwide, the Kohl’s children’s museum being one of them.

“When I met Gretchen… I stopped her instantly as she started to describe what it was,” Siegel said. “Not many people in South Africa know what a children’s museum is and most people have never been to one. We don’t have anything like it in Johannesburg or in the whole country for that matter.”

Although Siegel was not involved in STAND, she enjoyed being a part of Key Club, a community service club at GBS. Throughout her years at South, she developed leadership skills and was able to easily connect with other students.

“I got where I am today because I have a hunger for travel, knowledge, language, food, passion, and adventure,” Siegel said. “I want to see everything and everywhere. That keeps me going.”

Before Play Africa, Siegel studied International Business Management at Oxford Brookes University in the United Kingdom. She traveled as much as possible and co-founded the business and entrepreneurship club at her university.

“I wouldn’t be where I am today without the love and support from my parents,” Siegel said. “They have always encouraged me to chase my dreams, even if they were hundreds and thousands of miles away. I am lucky because I get to talk to people about what I am passionate about and why Play Africa is so important in our community and then open a door for them to get involved.”