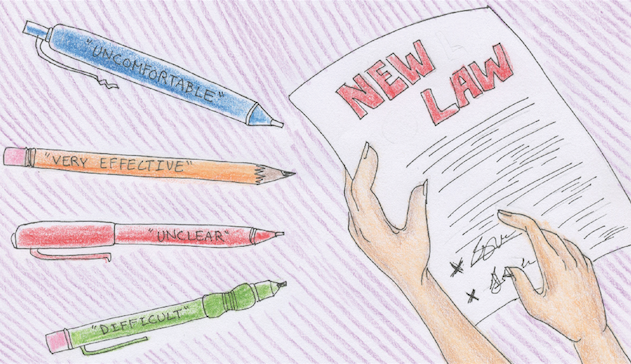 After the Illinois State Board of Education formally mandated the Performance Evaluation Reform Act (PERA) in February 2014, public schools began preparations for a “student growth component” as part of the administration’s method of evaluating classroom teachers.

According to Principal Lauren Fagel, the 2015-2016 school year is a trial run for the new teacher evaluation standards that will be fully implemented on Sept. 1. PERA requires the district to create a group called the Joint Committee that will determine the percentage of teachers’ evaluations that are made up of a student growth component. This component will make up at least 25 percent of evaluation in the first two years of implementation.

If the Join Committee is unable to agree upon a number that is 25 percent or more, according to Fagel, South’s standard will become the state’s 50 percent default.

“[That] just tries to take teaching and turn it into nuts and bolts, like ‘Okay, what’s the average growth?’” Fagel said. “‘Well, then that means that you’re a proficient teacher,’ and that’s just not how adults do well. Nobody wants to be under a microscope like that.”

Fagel says that guidance counselors, social workers, school psychologists, nurses and speech-language pathologists that do not teach or co-teach are exempted from this method of evaluation. For teachers that are evaluated this way, it is just one component of their performance review.

“[Teachers are] always going to be looking at [student] growth, but they need to pick one that they’re going to measure and give to their boss and say, ‘Use this as part of my evaluation.’” Fagel said. “[That unit is] going to be [at least] 25 percent of the teacher’s evaluation. Everything else is on their classroom practice.”

Elizabeth Lupfer, social studies teacher, does not agree with the usage of standardized testing as a method of reflecting students’ learning.

“All students and parents and teachers know that the student—especially a teenager—is most responsible for their learning,” Lupfer said. “We all admit that. They have a good day, they have a bad day, they’re interested, or they’re not interested, or they have things going on in their own life. […] I’m worried that focusing on such a narrow part of the learning in the class [with] multiple choice tests [will not show everything] we learn in here.”

According to English Teacher Debbie Cohen, there has been an increase in data collection about teaching in recent years. She believes using pre-tests and post-tests as teacher evaluations will be difficult to apply in a way that will benefit students and teachers.

“Teachers all over the school are always assessing the students in one way or another,” Cohen said. “We’ve been doing a lot of work on formative assessments [and] giving feedback to students to help them monitor their progress towards their learning goals. I think it’s interesting and possibly useful to look at student growth in the aggregate like we’ve been asked to.”

“I feel like it’s just another requirement that [teachers] have to fulfill,” O’Malley said. “I’m always trying to figure out what my [students’] knowledge is before and then making sure that they improve afterwards, so I’m not so sure that this [method] is going to make a huge difference.”

Additionally, O’Malley does not believe that pre-testing and post-testing is an accurate way to measure a student’s learning growth.

“What my definition of growth is for a student might be different from somebody else’s, so I think that [is an area of concern],” O’Malley said.

Spanish teacher Rachael Rothrauff did not explicitly pre-test and post-test her students, but used various activities and quizzes at the beginning of the year to gauge her students’ prior knowledge of the material.

“I think it is very effective, in terms of a teaching strategy,” Rothrauff said. “The more you know about what your students know, the more accurately you can guide them in [learning].”

As the Joint Committee continues to look at the usage of the pre-tests, Fagel says that the committee will also continue to create a plan that will be comfortable for teachers, administrators and students as the transition to the new evaluation standard begins. While she does not think that the new form of evaluation is ideal, she hopes that South will be able to implement it in a way that satisfies everyone.