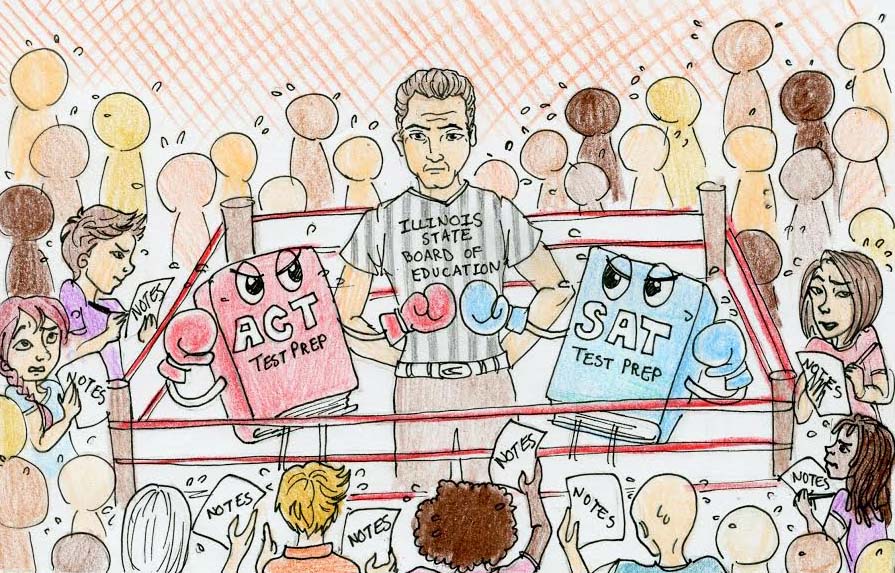 Late in 2015, the state of Illinois ended its three-year, 14.3 million dollar contract with the ACT, allowing the College Board, creators of the SAT, to propose their own contract. This contract was 1.37 million dollars less than the ACT company’s bid.

According to Principal Lauren Fagel, a few major components were taken into account when determining to switch, the more crucial ones being the cost of administering the test, prep opportunities and accommodation for special-needs students.

“A committee at the state level looked at several different factors.” Fagel said. “They [used] a rubric that they used to score each company.”

A possible factor closing the decision to contract with the SAT is their connection with the online tutoring service, Khan Academy. According to Fagel, this was appealing to the state because it allows students to take four free practice SATs and receive a preparatory course based on their results. Due to budget issues and the ACT’s determination to fight the contract, the decision has not been finalized.

“ACT is in the process of appealing that decision,” Fagel said. “They are desperate to get Illinois back. However, I don’t think they are going to win the appeal.”

Fagel explained how schools will be able to start offering the SAT once the state’s budget is finalized and the ACT Company loses the appeal. She described the frustration this has caused among principals of the Central Suburban League.

“We meet four times a year, and we are always talking about current issues,” Fagel said. “[Right now] we feel like we are at the whim of Springfield. There is all sorts of planning that we need to do [in terms of] scheduling, so there is a lot of frustration at the timing. It takes months to administer a test [like this].”

Cameron Muir, the associate principal of curriculum, also commented on the constraints the decision could place on GBS.

“It’s a large expense to put on a test for 800 students,” Muir said. “If we wanted to give the ACT instead of the SAT, we would have to contract with the ACT company separately.”

According to Muir, the SAT has recently been rewritten to fit Common Core standards.  However, he does not believe that either test had any outstanding features that made one better than the other.

“Colleges accept and respect both tests,” Muir said. “The tests provide a sliver of insight into a student’s educational portfolio. I think both of them do that sufficiently.”

In terms of curriculum, Muir anticipates that little will change. Philip Gartner, Math Department instructional supervisor, sees some benefits for students regarding the SAT’s math section.

“I think it’s very helpful for our students that the SAT allows [them] to use the CAS calculators,” Gartner said. “We want our students to use tools they are comfortable with, so I think that’s wonderful.”

Gartner also believes that the SAT will be able to capture the strengths of GBS students that may not have been highlighted in the ACT.

“The SAT is more based on data and statistics, which works well with our students and our curriculum,” Gartner said. “I think our math curriculum prepares students very well for that.”