South gives back: Students and staff take part in charitable actions to help individuals in and around Glenview community 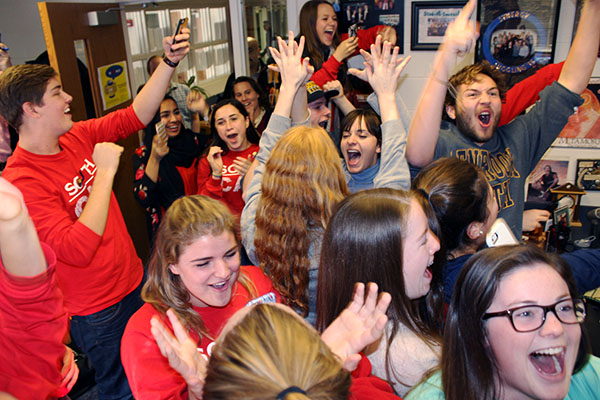 TRIUMPHANT TITANS: Upon hearing the final count of cans collected during the annual Canned Food Drive, Student Council members scream and shout in their celebration for reaching and exceeding their goal from last year. The starting goal for the Canned Food Drive was 100,015 cans, but this yearís drive yielded a total of 124,000. The cans were donated to Vital Bridges, Onward House and the Northfield Township Food Pantry.

Various South clubs and organizations participate in charitable work during the holiday season, running from late November to early January.

“It’s always important to recognize that you have more than other people have,” Principal Lauren Fagel said. “You can help someone.”

“I think it’s nice that [during] the holidays, there’s a whole variety  of things,” Fagel said. “I think sometimes kids can feel pressured, like they’re constantly being asked to give, but I hope students think [they can] choose from a lot of these things.”

One of South’s many charity opportunities is an event called Letters to Santa, organized by Lucinda Pouplikollas, Hellenic Club sponsor.

“I think the biggest thing that our kids learn is that there are so many kids at our school who really don’t realize how close poverty is to our school,” Pouplikollas said.

According to Pouplikollas, Hellenic Club organizes Letters to Santa during the holidays. Through this event, students from various classes and clubs are assigned a letter from a child who attends Rogers Elementary School in Rogers Park, where 95 percent of the students live in poverty. The South students are then responsible for providing that child with a gift.

“We are so fortunate that we don’t realize how fortunate the kids that are attending [South] are,” Pouplikollas said. “I think this kind of makes [the students] take a step back and see that there other kids that just need a pencil, or they need socks.”

According to Pouplikollas, giving a gift to a needy child is a much bigger connection than writing a check.

“I just think [that] to be able to come to a school like ours, and be the recipient of so many wonderful things […] puts us all in a position, either financially or with our time, to give back,” Fagel said.

The South Student Council recently ran their annual canned food drive, in which students and faculty were encouraged to donate food and money which would then go towards the local food pantries. According to Kevin Gordon, student body president, all the hard cans from the drive are donated to Onward House, and the proceeds are distributed between charities such as Onward House, Vital Bridges and the Northfield Township Food Pantry.

According to Gordon, the cans and money that are brought in through the canned food drive during the Thanksgiving season is vitally important in making sure that everybody who needs food gets it. This year, both students and staff  worked to raise 124,000 cans.

“The big business committee, [which goes out in the community and asks businesses for donations], is important […] because it gets the community involved,” Gordon said. “So, the school and the community work together to help the people who depend on the food pantry.”

STAND for Peace (STAND) also involves students school-wide in charitable work through an event called Standy Canes. Through this event, students can buy candy canes to deliver to their friends. Proceeds from this event go toward funding the education of Purity, a teenage girl in an impoverished area of Kenya, according to Kate Hegay, Stand for Peace board member.

“I think that Standy Canes is just such a light-hearted way to raise awareness and money for such an important issue,” Hegay said. “Especially around the holidays, you know, we’re very lucky to live in a community where not too many people need to worry about the necessities and basics. Right around this time, it’s really a great time to tell people about people who aren’t as lucky as they are, who do have to worry about things like coming to [and paying for] school.”

According to Hegay, the success of Standy Canes comes from its simplicity. Not only do the people who receive candy canes feel appreciated, but with each candy cane, money is donated to Purity through a program called Mantanya’s hope.

“There are so many more kids like [Purity,] and there are so many kids involved in the program,” Hegay said. “So [our purpose is]  just making sure that people are aware of the fact that the situation we’re in is basically the best situation that you can be in. We are one of the very, very few lucky ones.”

According to Hegay, the Standy Canes table will be set up outside the cafeteria during the days before winter break, and the candy canes and messages will be delivered on Dec. 18. According to Fagel, charity is a great way for anyone to get involved.

“I think everyone can find a way to give back to someone, even if you’re someone who doesn’t have a lot of material things,” Fagel said.

One of these ways is through the Random Acts of Kindness campaign run by Key Club. According to Josh Koo, Key Club Sponsor, the event was run from Dec. 8 to Dec. 18 this year.

“Between myself and the Key Club board members, we thought, ‘What if we do a campaign where we directly encourage people to do something kind every single day?’” Koo explained.

According to Koo, one way Key Club encouraged these acts of kindness is through challenge cards. These cards stated a selfless task to accomplish and were intended to help guide community members in charitable actions.