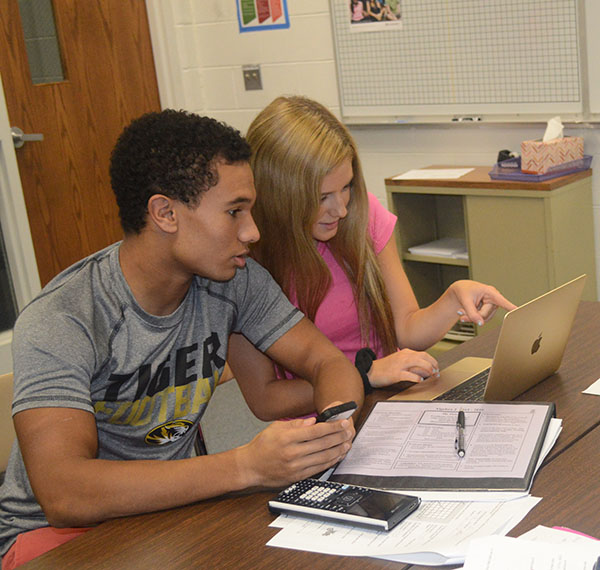 TECH TEAMWORK: Problem solving together, juniors David Magloire and Taylor Mandell use technology as an aid in completing a math assignment. Technology use in the classroom has become much more common at South, expanding to include the use of cell phones for academic purposes.

GBS students are adapting to the increased usage of technology throughout the school, between academics, activities and athletics. According to South Principal Lauren Fagel, reliance on technology has many benefits for both students and adults.

“I think if it is used well, it can help students and adults increase efficiency,” Fagel said. “[Google is] efficient, collaborative, and streamlined.”

However, Fagel recognizes that all people have personal preferences that must be accommodated for.

“I think we are living in two worlds,” Fagel said. “A lot of people still prefer to do things by hand and we also have this amazing technology at our disposal.”

According to junior Lori Steffel, teachers have made a noticeable shift to Google products since last year. Google Classroom in particular, a product that allows teachers to post assignments, announcements and calendars on a class blog for all their students to see, has become more common.

“Last year seemed like a transition year between Moodle and paper assignments, but this year a lot of my teachers have switched over to [Google] Classroom,” Steffel said. “I personally like this because it keeps all of my information in one place, and I know that all my teachers use [Google] Classroom […] so I find it much more accessible.”

One student in favor of the technological shift, junior Audrey Brown, claims that Google is beneficial to an educational environment. Brown says the use of Classroom is inconsistent between her classes, but can be effective when used.

“I know a lot of teachers are attempting to use Classroom and weave it into their lesson plan,” Brown said. “[For many], it works for posting homework and announcements, but some hardly use it at all.”

Spanish teacher Rosemarie Carsello believes that Classroom is an great resource for her students to take advantage of.

“The product that I use most often is Classroom, and I use it primarily to post weekly calendars, any kind of special announcements or instructions, and anything that students may want to refer to later on [at home],” Carsello said.

Carsello appreciates the accessible features of Google and aims to deepen her level of understanding for the technology.

“I think it’s a great place to go to for everything,” Carsello said. “It’s a home base, a resource for students, and I think the possibilities are many. I’m just beginning to tap into what those possibilities are.”

English teacher Katrina Prockovic straddles the line between electronics and paper, for she sees advantages and disadvantages for both.

“I [use Google], but I don’t like to rely solely on [it],” Prockovic said. “I’m all for trying new things and diversifying how kids learn and how teachers convey information.”

For Prockovic, the biggest transformation has been how students complete their English essays.

“Two years ago was [when] I stopped asking students to turn in paper hard copies [for their essays], because there was no need,” Prockovic said. “Kids would just share Google Docs, and we would collaborate that way.”

She believes this enhances students’ effectiveness in her class and helps expedite the writing process.

“On the one hand, it made for immediate feedback,” Prockovic said. “For seniors in Rhetoric working on their college essays, we could collaborate very easily.”

Another application connected to Google is Calendar, which allows for students and staff at GBS to create collaborative, user-friendly and visually-appealing schedules, according to Dr. Jim Shellard, Student Activities director. In a survey conducted by Shellard at the end of last year, less than 50 percent of students at GBS purchased paper agendas from the bookstore, which led to an administrative decision to discontinue their production.

“One of our jobs as administrators is to help prepare you for the real world, where everything is done [electronically],” Shellard said. “Using Google’s [products], like Mail, Drive, Classroom and Calendar, is essential to your academic careers at GBS.”

In addition to Google, there has been a noticeable shift to the use of electronic textbooks (e-books), according to Brown. In four out of five of her classes, Brown uses an e-book.

“For classes like US history and English, I would rather have the physical copy of the book in front of me for [annotating],” Brown said. “But, I definitely think some students struggle to [avoid] distractions while using e-books—whether it’s playing games or going on social media.”

According to Steffel, e-books have both positive and negative aspects to them.

“I like [e-books] because I don’t have to carry heavy textbooks to and from school, which [makes homework easy to complete] while at school,” Steffel said. “[On the contrary, staring at a screen] while taking notes for hours gives me a headache.”

Whether in favor of the technology shift or not, Prockovic believes students and staff should be open-minded about the changes.

“What works for one teacher or student, doesn’t work for everyone,” Prockovic said. “I think it’s important to approach everything with a healthy sense of skepticism and optimism and to use what works for you.”