Plante is no cow-ard when caring for animals 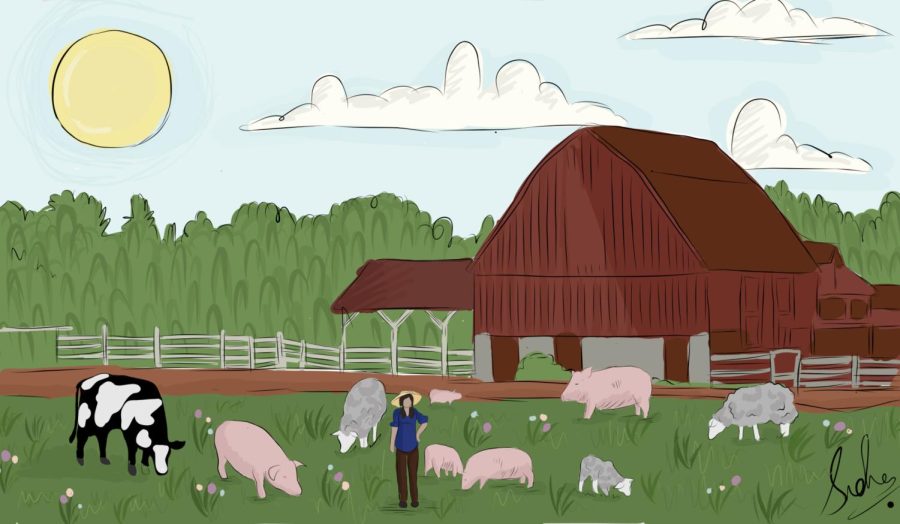 For senior Maddie Plante, summer days are spent at Historic Wagner Farm washing Patch the cow, walking lambs Hudson and Theo, and taking a stroll alongside Sweet Potato the pig.

Wagner Farm remains the only running farm in Cook County, and the Glenview Clovers 4H Club program connects the suburban community to its rural culture, Jonathan Kuester, 4H Dairy Project Mentor, explained. Though many [South] students busy themselves with school-affiliated activities, Plante pursues her interests on the farm through the 4H program with animals of her own.

“[Working with animals] just spoke to me,” Plante said. “Some kids have sports come naturally to them, some kids have music, [and] for me, [taking care of farm animals] comes very naturally.”

Since a neighbor told her about  the 4H program when she was nine, Plante has immersed herself in the club’s activities because she hopes to continue in the agricultural field after high school. The 4H Club offers kids hands-on experience with the farming lifestyle, while also providing them with activities in other fields of interest, Kuester elaborated.

“Every member of the Glenview Clovers 4H Club at Historic Wagner Farm participates in a livestock project,” Kuester said. “The participants work as a group to do feeding and cleaning chores, groom their animals, and train them for the livestock show at the [annual] Lake County [Illinois] Fair.”

Plante is familiar with the demands asked of her when taking care of livestock and has met them with ease.

“I bought [the animals] with my own funds,” Plante said. “With my cow, I found the breeder myself, [and] with my lambs, I went to a large sale in Indiana called the ‘Midwest to Wheat’. There, I bid on two sheep and I brought them home.”

After taking the time to acquire her animals, the work didn’t stop. Plante explained that the six-month project that follows is something that she is both committed to and fond of, despite the demanding daily routine it entails.

This time commitment creates a tough weight to balance, Plante admitted. However, Plante perseveres during the busiest points of the school year to make time for her animals. For the summer, she plans to return to the full-time, 4H schedule.

“Over the summer, I’m [at Wagner Farm] every day working with my animals, doing what needs to get done,” Plante said.

The level of responsibility and commitment required to maintain her responsibilities not only teaches Maddie lessons along the way, but sets an example for her sister, sophomore Mary Grace Plante. Mary Grace was formerly a member of the program, and still views her sister with admiration for the work she puts into the farm.

“It’s really cool that she’s always working and trying to be the best that she can be with her animals,” Mary Grace said. “She really puts in time and money.”

One additional lesson Maddie has taken from her time with 4H is a deeper understanding of nonverbal communication with animals. She said that the hours of working with animals has taught her new ways to understand their actions.