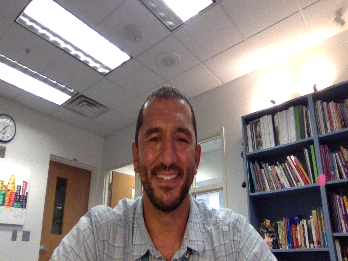 Aspiring Adamji: David Adamji replaced Thomas Kucharski as the instructional supervisor of the English Department. Adamji is grateful for the welcoming environment of South that has helped him settle in to his new position. Photo courtesy of David Adamji.

The world looked a lot different when David Adamji, English Department instructional supervisor was hired in January. Pre-pandemic, he had not expected his first year of teaching at South to be through a video screen.

Although the transition to e-learning has been difficult, the hardest part has been the missed first interactions between the students and teachers in his department, Adamji explained.

English Teacher Dr. Thomas Kucharski previously held Adamji’s position before stepping down. The position is a combination of teaching and administration work, Adamji said. Along with running the English Department, which includes placing transfer students, meeting with teachers and working with middle schools, Adamji is also responsible for teaching one senior Humanities class. Adamji noted that he is also working on adding new texts to the curriculum in order to represent different voices that had not previously been portrayed.

“We’re all working on really ensuring a sense of belonging for all of our students,” Adamji explained. “Ensuring that all students, regardless of who they are, where they come from and their past academic experiences, feel like they belong here and have access to an excellent education is something I care deeply about.”

Prior to working at South, Adamji worked at a variety of schools throughout the country in both the administrative and English Departments. Most recently, Adamji worked at Walter Payton College Prep in Chicago, where he spent his first five years in the English Department and the next eight as an assistant principal. When he discovered the vacant position at South, Adamji explained that he was intrigued by the way it would enable him to both lead the department and continue teaching students, something he did not find at his previous jobs in the city.

Throughout the interviewing process to acquire the position, Adamji said he met with many different staff members. The process started with a screening interview over the phone between Adamji and Principal Dr. Lauren Fagel, followed by a more formal interview with the entire administrative council, Fagel said. After that, Adamji had to interview in front of a large committee consisting of English teachers before finally teaching a class, Fagel said. This whole process helped Fagel get an idea of who Adamji was as a teacher.

“He just struck me as a person who’s very caring, compassionate, empathetic, [and] thoughtful,” Fagel said. “I want a leader to care very much about the students and also about the teachers.”

Despite the strangeness of starting a new job during the time of e-learning, Adamji believes he is beginning to settle in, which he attributes to the welcoming environment of South. He is impressed by the dedication and commitment of both the teachers and students at South, and feels very grateful to be part of such a positive and friendly atmosphere, Adamji remarked.

“Glenbrook South is such an amazing community of teachers, parents and students,” Adamji explained. “I’m really excited and honored to be here, and I’m ultimately looking forward to when we can all meet in person.”