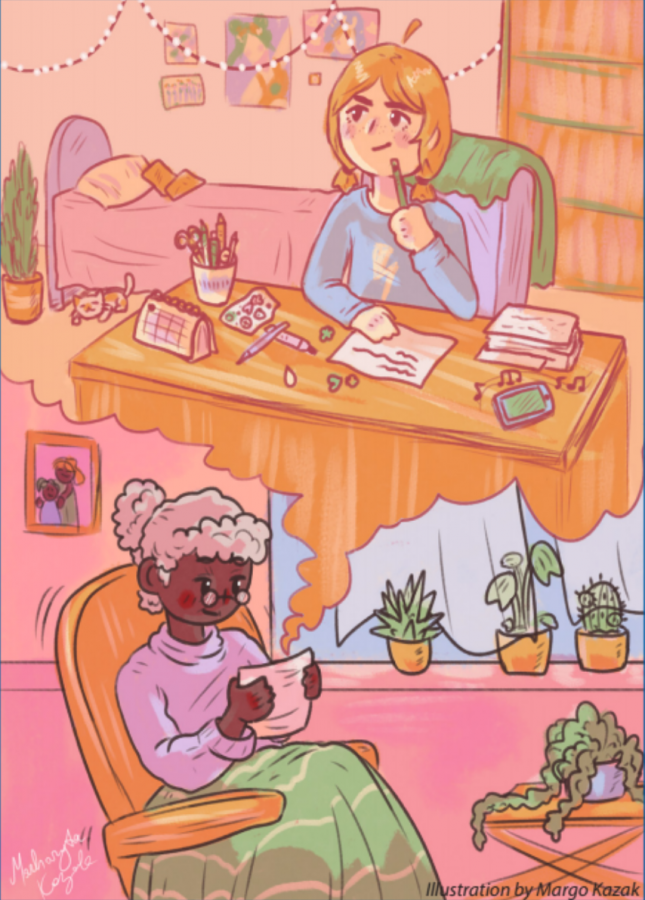 For many, quarantine has posed several challenges. People are cut off from their families, grocery store bills continue to become more expensive and toilet paper is a scarcity. Some people have also been laid off from their jobs. Still, a few members of South are determined to spread positivity through this time in quarantine by giving back to the community.

One of these people is sophomore Liz Duncan who has been sewing masks for people struggling to obtain them. She also has been running a “contact-free” canned food drive out of her garage. Duncan said that her helping-hand towards others started as a hobby to fill time during her quarantine.

“I felt pretty useless sitting at home and I assumed most people must be feeling the same way, so I decided to use that feeling to inspire charitable donations toward the [Northfield Township] Food Pantry,” Duncan said. “My favorite part is knowing that no matter how small the donation, what people give is going to make a difference.”

Biology Teacher Christopher Hilvert has also been serving the community by forming a letter-writing campaign to people in nursing homes and rehabilitation facilities. The letters are written through a program called Pandemic Pals, Hilvert explained.

“A columnist from the Chicago Tribune who I am ‘email friends’ with, Rex Huppke, got me involved with Pandemic Pals,” Hilvert said. “The students [in my classes] wrote an initial letter to those in nursing and rehabilitation facilities, and then if the resident responded, they continued to write back.”

Like Hilvert, senior Cole Dubrow, member of the administration committee in Key Club, has also been involved in the Pandemic Pals program.

“We have been writing letters to [senior citizens] in order to provide friendship and social interaction during this hard time,” Dubrow explained. “[Key Club] members are writing these letters from their homes and mailing them to their assigned senior citizen. Some members have received a letter back and continued correspondence while some senior citizens have not been able to write letters back, but they still received and appreciated the letters.”

Senior Adair McMahon has been giving back to the community through South’s radio station, WGBK FM 88.5. McMahon, along with other members of the radio station, is sharing stories and music for their listeners to tune in to under quarantine.

“So far, each member of the radio station has recorded an audiobook, created a quarantine playlist of all of the recent music they’ve been listening to and currently, we are working on podcasts that we will soon release,” McMahon said.

McMahon shared that her favorite aspect of creating the audiobooks was its young target audience, and what the stories would mean to them during these times.

“My favorite part about doing [the story] was creating different voices for the characters when reading the book,” McMahon said. “I also love that we are reaching a younger population and providing something for them during this time.”

Looking beyond quarantine and toward the future of Key Club, Dubrow believes Pandemic Pals will have changed the club for the better. Nearly 100 people are participating in the campaign and many invited friends and family to join, Dubrow said.

“I was so inspired to see how much interest and involvement there was,” Dubrow recalled. “In a time of so much uncertainty, I was comforted by Key Club’s commitment to helping the community.”