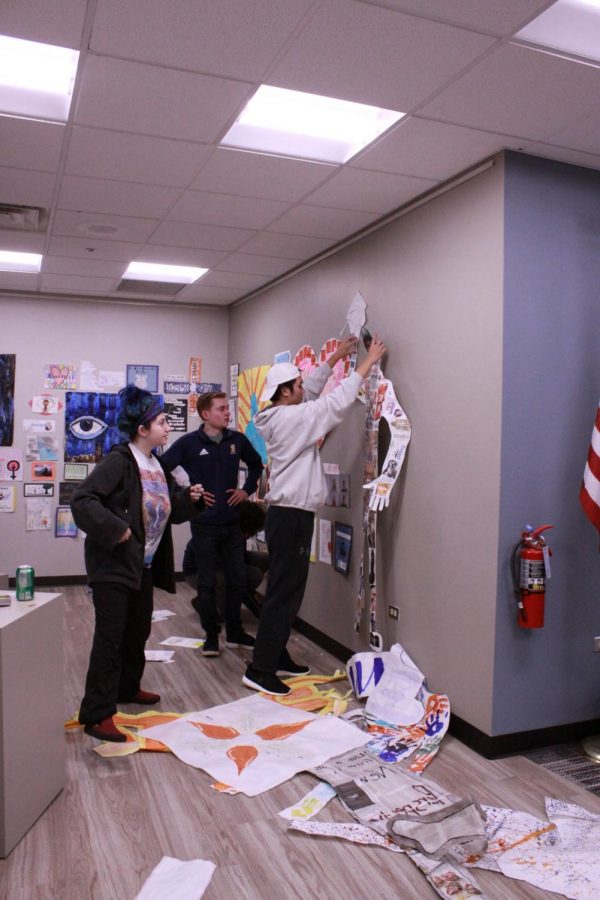 Seniors part of the Senior Summit design committee work together to hang up the artwork in the gallery. According to senior Colin McCarthy (middle), their goal was to create a united collage from all art submissions.

“Kindness.” “Justice.” “Freedom.” “Fun.” These are just a few of the abstract nouns the senior class used to capture their core values during a moment of reflection. “A View of the Summit” is an art exhibit collectively created by the senior class, built to convey each person’s individual message about what they have learned to value in their personal lives.

Scott Glass, humanities teacher and director of the Senior Summit project, said the gallery is a summary of a larger project executed by senior English classes over the last two months. Centered around seniors finding their core values, the project began with students choosing three words that captured their moral beliefs.

“This [project] is a great way to start thinking about what is it that really means something to you, what is it that resonates with you, and what is it that you represent because that is what people are going to want to know about you for the rest of your life,” Glass said. “What do you stand for?”

In some English classes, students were then asked to take that one core value word they chose and create a piece of art that manifested that belief. Senior Collin McCarthy said he chose the word “passion” because he believes people’s lives are guided by what they are most passionate about. McCarthy created a visual poem centered around his passion for golf that is now hanging in the gallery.

“If I’m sitting around, I’m not going to think ‘Oh I’m gonna make art,’ but this [project] forced us to do just that,” McCarthy said. “It’s good in a way because now that I have [made something] I’m glad that did it. It’s a nice way for people to see that they’re capable of making something that is important to them.”

Similar to McCarthy, senior Kate Hershey learned the value in being able to create art, and how special it feels to have it displayed for the school to observe.

“Seeing all of my peers expressing themselves and getting to express what I’m passionate about was really cool,” Hershey said. “No matter if you are in art or not, you can make some pretty cool stuff. I know a lot of the stuff created didn’t take a lot of artistic skills, but you just have to have a good idea and the passion behind it.”

Hershey and McCarthy were just two among a team of seniors that worked alongside Glass in an editing process to choose pieces of art to display in the gallery. The gallery is now located in the principal’s office and is up for display through the month of December. McCarthy explained how setting up the exhibit allowed him to think creatively about the best way to deliver the Senior Summit message.

“An art exhibit isn’t always about what’s in it, but it’s also about the way in which it is presented,” McCarthy said. “The way you present the art has almost as big of an impact as the art itself. We wanted to make it really jump at you when you walked in and we wanted to make it look packed full of [creativity], so it came out as a collage of work. The way we chose to do it was smart because everything is unique that’s up there, but when you stand back and look at it together, it all blends together nicely.”

Glass explained that seniors were chosen for this project because it provided them an opportunity to be aware of the community that has been around them during their time at South. According to Glass, the Senior Summit aimed to get seniors to find commonalities with each other, especially because of the tendency for students to be unaware of the people around them.

“Even now that [seniors have] been here for four years, this school is a big place, and it can sometimes start to feel anonymous or faceless almost,” Glass said. “I think it’s just always a good reminder like ‘Okay, there are a lot of people in this building who have many of the same dreams and hopes and struggles that I do, but who I might just walk by without even noticing,’ so it’s nice to stop once and a while and see these faces and make those connections. That’s a powerful thing.”

Hershey and McCarthy both agree with Glass’s message about the significance in creating something meaningful. Glass said he hopes the project will communicate to students that they have the power to create art.

“The thing that I have said to my own students a number of times is that it’s just important to make something with your own hands that is focused on something that is.. [of] relevance to you,” Glass said. “That’s the power of making art, is that it forces you to pay attention to yourself and your work, and it forces you to be intentional. I look at the stuff that people give to me, or I stand in the middle of that gallery and it just makes my heart big. It just fills my heart.”