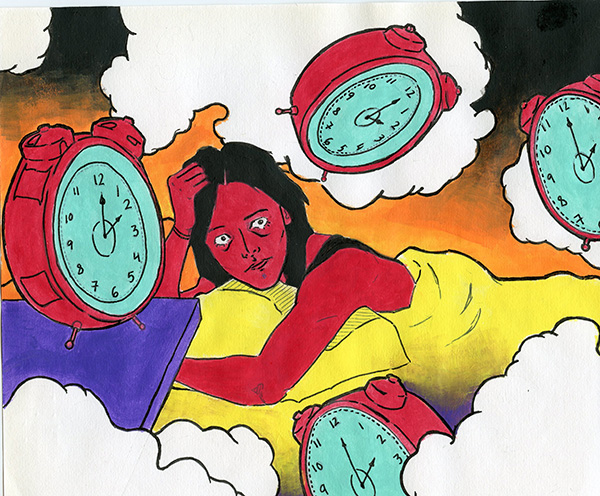 We have all heard the constant reprimands from doctors and parents: “Teenagers need at least eight hours of sleep each night!” But how many of us actually do get “enough” sleep? Less than 15 percent of teenagers reported sleeping eight hours on a school night, according to the National Sleep Foundation, an organization dedicated to improving the well-being of individuals through sleep education and advocacy. Most teenagers don’t get the recommended amount of sleep because of schoolwork, after-school activities, and other pastimes, but an increasing number of teenagers are up at night because of sleep disorders, the National Sleep Foundation stated.

Senior Maddie Appel, junior Ale Galarza, and sophomore Gabi Ryder* were diagnosed with insomnia, which is a sleep disorder characterized by difficulty falling or staying asleep.

“Insomnia, at least for me, is when you are hyper-alert at night,” Ryder said. “As for how it develops, I’m not really a [doctor], but it’s something to do with [an imbalance] of chemicals in your brain.”

English teacher Sandra Mulligan believes that sleep deprivation, along with sleep disorders, is an important topic that needs to be addressed. Lack of sleep can cause cloudy thinking in school and produce nervousness, anger and stress which can make driving unsafe, Mulligan said.

“For a student experiencing a pattern of sleep deprivation, I suggest evaluating daily habits near nighttime that might interfere with falling asleep,” Mulligan said.

Ryder said that she would lie in bed awake until 2 a.m., staring at the ceiling. It got to the point where her father would be getting up for his morning shift by the time she finally fell asleep, Ryder stated.

“I get like six hours [of sleep] a night, although with high schoolers that might be normal,” Ryder said. “I just run on steam. And when the weekend comes, I sleep [in] really late and hope the week tires me out.”

Similarly, Appel would try to go to sleep, but couldn’t. She said it became extremely difficult to sleep if she had a test coming up because stress would keep her awake.

“It’s really frustrating because when you are trying to fall asleep and you are mentally exhausted, especially from being at a full day at school, it’s hard to come home and not be able to relax and rewind,” Appel said.

Galarza’s lack of sleep affects her ability to focus and function in school, she said. Especially during her rowing season, it is hard to fall asleep because she gets up early in the morning and has so much homework to complete late at night, Galarza added.

“It’s much harder when you are involved in a sport or when you’re at school because sometimes you get stressed over those activities,” Galarza said. “I think the hardest part is finding a routine that works [with] your activities and can also help you have a healthy cycle of sleep.”

Appel said balance is hard to find at first, but once you do it’s about keeping the rhythm. It’s arduous to keep everything together, and the fatigue really hits you, she added.

“Being more active and energized [is the hardest part of having insomnia],” Appel said. “I’ve noticed that when it’s gotten worse I’m shut down a bit just because I’m so exhausted and fatigued that I can’t [be] as enthusiastic or energized as I used to be.”

*Names have been changed.