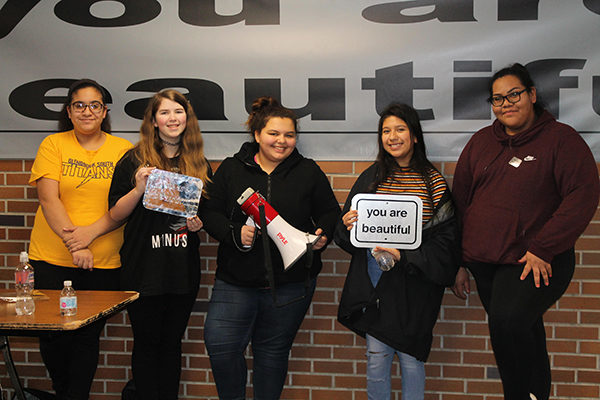 Beautifully built : Beaming with smiles, (left to right) freshmen Nermeen Abdelgaward, Mya Wagner, sophomore Alina Bergquist, junior Jazmin Montesinos and senior Jenny Vargas advocate for South students to participate in their campaign during lunch blocks. The ‘You Are Beautiful’ campaign was brought to South by the club Images with the help of SAFE.

Within the busy hallways during hectic school days, some take a brief moment to stop in their tracks and look up at a wall that stands in front of the cafeteria. On one of these walls hangs the beaming smiles of various students with their peers and friends, holding up signs that read, “You are beautiful.”

According to Pantra Hoeft, Guidance Counselor, the campaign was initiated by a 15-member in-school group known as Images, which she and School Psychologist Jenny Meek and Guidance Counselor Jennie Bentley created in accordance with their focus on teenagers’ self-image.

“We’ve seen that teenagers lately are so hyper-focused on social media, new technology and how to filter [their]face, or distort their body,” Hoeft said. “[This] creates a lot of fantasies and hopeful thinking that people can be a certain way when really, they’re moving away from their true self.”

Images received help in bringing this positive message to the hallways, partnering with club members from SAFE. Sophomore Samantha Pareja is a member of the group Images, who initially suggested the idea of a photo shoot for the campaign.

“Our sponsor suggested the words ‘You are beautiful’ posted up in the hallways, and I suggested that we do a photo shoot to show how each person is different and that there is no standard on how you look,” Pareja said. “We decided an in-person photo shoot would be better: not on a screen, no editing, just right there in the middle of the hallway.”

Sophomore Justin Manalang got his photo taken and found that this campaign was special because he got to share the moment with one of his friends as  of celebration of their physical appearance.

“I took the picture with one of my friends [who] always gets compliments on how pretty she is, so it was like, ‘Hey, let’s be pretty together,’” Manalang said.

Manalang felt that the campaign was a great way to bring students together through a positive message.

“I think the whole thing is great because it makes people feel less singled out,” Manalang said. “When it comes to physical appearances, everyone is united with their differences in [this] campaign.”

Another participant, sophomore Rebecca Thomas, had her photo taken with her friends. Thomas also shared a sense of unity.

“It was nice to look back at the photo because [my friends and I] are all laughing in it, and it was a good time,” Thomas said. “Taking the picture with my friends [enhanced the message] because it was like a united front, reminding us that we’re all in this together.”

Images has gotten only positive reactions, according to Hoeft. However, for Pareja, this campaign was especially significant.

“As a person who has been insecure about how I look and how people think of me, I really like spreading the word that [everyone is] different,” Pareja said. “You don’t have to look a certain way, [which made] this campaign near and dear to my heart.”

Sophomore Alina Bergquist, Images member, worked on the campaign as well and dealt with her own issues of confidence along with self-image .

“If I hadn’t been in the group and [we hadn’t] talked about ourselves or our body image, I would probably be in a bad state, [similar to] where I was before,” Bergquist said. “Talk to a parent, teacher, counselor, friend, student. Just talk to someone.”