Answers are in your DNA: do you want to find them? 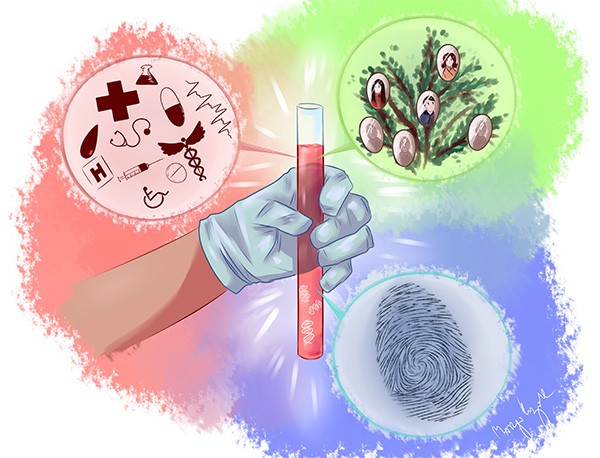 If you had the opportunity to trace your genealogy back to your ancestors, would you? If you had the ability to identify genetically predisposed conditions before they might develop, would you want to know? According to AP Biology Teacher Christopher Hilvert, this information is now available through DNA Testing companies like ancestry.com and 23AndMe. Hilvert explains that, at a cost of 80 to 120 dollars, these companies provide consumers with a small vial to be filled with saliva, containing cheek cells. After a sequencing process, a person’s genealogy results are sent back within several weeks to months.

DNA is found in the nucleus of all cells excluding red blood cells, says Hilvert. The differentiating factor in each person’s genealogy stems from the base pair configuration of their DNA sequencing, or the order of the four basings, adenine, thymine, guanine and cytosine. A person’s base pair sequence is most similar to that of their parents’ or sibling’s. Each person’s DNA is entirely unique, with the exception of identical twins, who have a correspondingly identical DNA sequence, all according to Hilvert.

Within the specific DNA sequencing lies an abundance of information regarding an individual, like ancestry and predisposition to genetic diseases. Less expensive DNA tests solely identify ancestry; this is done by comparing a consumer’s submitted sample to samples already in their databases that can be traced to differing countries, according to Hilvert. More expensive tests include options to screen for possible health issues.

“Knowing [the sequencing], you can identify genetic diseases, [match it with DNA to determine] if you were at the scene of a crime, any kind of genetic component in your ancestry. All of that stuff is coded in that sequence,” Hilvert said.

DNA testing has led to significant advances in the field of forensics and crime. According to Hilvert, such technology was used to find the Golden State Killer, a California serial killer responsible for 13 murders, 54 rapes, and 154 burglaries between 1976 and 1986.

“Thirty two years later, the investigators in this case went on one of those ancestry sites, found some DNA that they had gathered 30 years ago, put it into the system, and through a series of genealogy tests, over a number of years, found [the Golden State Killer], 32 years after he did it,” Hilvert said.

Sophomore Patsy Carolan was adopted from China, and upon learning about DNA testing, brought it up to her parents, curious to investigate her biological heritage. For Carolan, this opportunity allowed her to feel more in touch with her identity and increased her interest in cultural exploration, as the results revealed more than just Chinese genetics.

“There were no background records really when my parents adopted me, so I thought it would be fun,” Carolan said. “I don’t have a particular interest to find out about my biological parents but I just think it would be nice to know. It is interesting, and it is part of me.”

For sophomore Dakota Betts, the decision to get her DNA tested was influenced by a desire to explore and distinguish her African American heritage, coming from a mixed racial background. However, this test provided another benefit, as it supported a developing diagnosis for Celiac disease. Betts explains that many medical tests were inconclusive in this diagnosis, but a health inclusive DNA test showed her likelihood and predisposition for being a Celiac carrier.

“Very honestly, I don’t think [the results are] going to affect me a lot in my day-to-day life,” Betts said. “I think the fact that it kind of confirmed the Celiac was helpful. It was interesting to just see the different branches of my heritage…It’s fun. Maybe I’ll connect with some distant relatives I didn’t know I had, but other than that, it’s just cool.”

Betts, who took a course at Stanford that focused on genetics, explains that these tests function by comparing submitted DNA to that of what they already have processed. Betts explained that accuracy is dependent on samples of corresponding genetic backgrounds. This, along with a curiosity to trace her mixed ethnicity coming from a white father and an African American mother, led her to take the test.

“I wanted to see how all of that played in, because [the results tell] you, like, ‘Oh, according to your DNA, your hair color should be this,’ all these things, and it was really interesting, because it said I should have blue eyes, blonde hair, and straight thin hair,” Betts said. “It was very interesting, because obviously that’s not very correct…The more blonde-haired people there are in the world that have used this [test], the more likely it is to be correct if you have blonde hair, the more likely it is to be incorrect if you don’t have blonde hair.”

Senior Nora Curtis explains how her aunt’s decision to get her DNA tested allowed her aunt to meet a new family member: her DNA results included a listed page of people already in the company’s database who, according to the DNA comparisons, should be related to her. According to Curtis, there was one unknown person on that list, and that person soon reached out to her aunt.

“The person messaged her first and sent her this ridiculously long message, I read it all, it’s really complicated but, she was my grandpa’s sister’s daughter,” Curtis said. “[The pregnancy] was kind of an accident, they put her up for adoption, she had been looking for her biological family for a really long time…My aunt was like, ‘She could just be scamming us,’ [but I thought] not really, [we have] the DNA [match]. It didn’t really affect our lives too much, it was just kind of insane that there was somebody out there looking for our family.”

However, with the increased popularity of these tests comes an increased anxiety: this new technology could have an unintended effect on consumers, according to Hilvert. Some areas of caution, for Hilvert, lie in the powerful health-related results, specifically related to how much a person can actually do once a predisposition for a genetic disease is actually identified.

“I think that’s an individual decision that you have to make, because if you know when you’re 18 years old that you have a genetic predisposition to something like Huntington’s disease, I mean, do you really want to know that?” Hilvert said. “If you do, there’s really nothing you can do about that. Now, if your genetic test comes back and says you’re predisposed to Type II Diabetes, well, then maybe you can do something in your lifestyle, your diet, your exercise, to maybe ward that off, you can do that. I just wonder if individuals really want to know that information so early in their life. Do you always want that hanging over your head?”

Discerning health responsibilities can be both an advantage and a disadvantage, depending on what a person is weighing, according to Hilvert. It mostly depends on whether or not the genetic disorder is one that can be prepared for, and what exactly that preparation looks like. While Type II Diabetes can be [addressed] with a change in lifestyle, conditions like Parkinson’s or Alzheimer’s cannot.

“There is a small percentage of individuals that have a genetic predisposition to Alzheimer’s or Parkinson’s and things like that,” Hilvert said. “I am not sure I really want to know that, because there’s nothing I can do about it. Do you want to [know]…that when you’re 75 or 80, you’re going to be living in a [nursing] home? Do I want to know that? I think that’s a personal preference. Personally, I don’t want to know that. I would rather just deal with that when it happens. A lot of people would say, ‘Well, then you can financially prepare.’ If you know that when you’re 75, you’re going to have to live in a high intensive nursing home for Parkinson’s patients, then you can prepare financially for that.”

For Hilvert, the ambiguity in the security of these DNA testing databases is worrisome. This information has the potential to be shared with authorities, insurance companies, or even employers, remaining a frightening reality.

“The scarier part, I think, about this whole thing is, if that information gets passed on to people you have not designated, they can get that,” Hilvert said. “Number one, insurance companies. Let’s say at 18, you find out you are predisposed to Huntington’s. Huntington’s is one of the worst diseases you can get. It’s a dominant trait that will kill you, and it’s a long painful death. What would happen if an insurance company…finds out that you have that? One thing they could possibly do is drop you from insurance. Another thing they could possibly do is just double your rates. Do we really want that information out there? That’s the biggest problem that you have to think about before you do something like that.”

Senior Megan Gnospelius worries about security in her daily life. For her, DNA testing is simply an invasion of privacy.

“I don’t like having that as public information,” Gnospelius said. “I think it’s a breach of privacy. Having your actual DNA on file for people to access, that’s a whole other level of privacy that you have lost. Also, insurance, that is very worrisome; I have a lot of health issues and I already have high insurance rates. If they were to know, ‘Oh, these are more [conditions] that could possibly [develop],’ I am going to pay so much money, which is ridiculous and unfair.”

Conversely, Betts argues that security or privacy is not  something consumers should be worried about.

“I’d just say, if [other companies or the government] are using the information, it’s most likely, like right now, it’s for a census or something of that sort, it’s not going to be targeting people or anything like that,” Betts said. “I think that if that was a concern, I would probably be less inclined to take [a DNA test], but because of how basic the testing is right now…it’s just not really at the degree to where you could be concerned about how much the government had access.”

The unique and new opportunity to have your DNA tested has certain risks, Hilvert says, but it is also a time of advancement.

“It’s a really cool time to be alive, that you have the ability to make these decisions,” Hilvert said. “Before 1990, there was no ability to do something like this. But now you have that ability. So, it’s the proverbial double edge sword.”