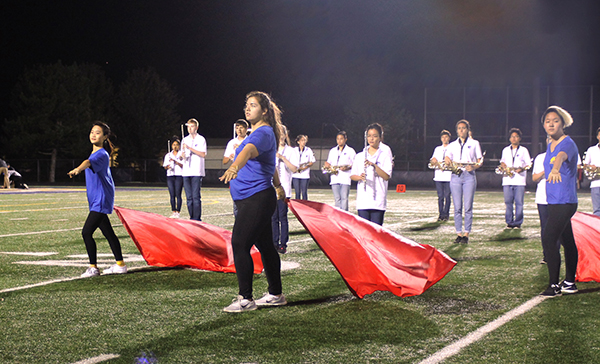 Vivacious Visuals: Performing alongside her teammates, junior Taylor Woitesek (center) partakes in Color Guard’s first performance of the year at South’s first home football game on Aug 30. The season has since ended, but Color Guard, along with the marching band, won Grand Champions at their final competition in Sandwich, Illinois.

Spinning flags and wooden rifles while concentrating on performing choreographed routines are the typical daily patterns of being a part of the Color Guard team at South. However, spectators are unable to see the behind the scenes friendships being made and the hard work dedicated to every performance, according to Donald Wiles, director and designer for Color Guard.

When performing their routines alongside the marching band, Color Guard is able to provide visual aspects to the marching band, according to band director Aaron Wojcik. As the designer, Wiles creates these combinations of dance and flag work to compliment the band’s performances.

“We are trying to match musically what the band is playing so you’re seeing something moving at the same time you’re hearing something being played,” Wiles said. “Whether you’re spinning a flag or a rifle, you don’t have anything to hide behind so visually, you’re a performer.”

As of this year, however, only nine students take part in Color Guard, according to Wiles. In the upcoming years, junior Taylor Woitesek, captain of Color Guard, predicts that the number of participants in Color Guard will only continue to decrease because of the lack of interest in the activity.

“For the future, to be honest, I feel that the numbers will just keep going down because people are getting less interested in marching band altogether,” Woitesek said. “Also, it’s hard to find people to join Color Guard or people who are interested because they have other commitments and many activities conflict.”

Although there are few members on Color Guard this year, junior Rebecca Hollimon has made many of her friends through this activity and feels she wouldn’t be as social if she had never joined. Hollimon states that meeting new people in Color Guard has changed her experiences throughout the years, and learning new material makes Color Guard more fun to be a part of.

“Color Guard is where I made friends from different grades because I joined my freshman year and I didn’t know a lot of people, so it was really fun,” Hollimon said. “I feel like if I didn’t join Color Guard then I wouldn’t be as social as I am now with people and I wouldn’t have any friends.”

In addition, Woitesek explains that friendships are made despite the difficult routines because members enjoy every rehearsal. Despite these tough routines, according to Woitesek, the members still bond during every performance.

“What Color Guard means to me is working with people who are dedicated to making a cool routine, while also having fun and bonding over many fun things,” Woitesek said. “It means making friends with people you never thought you’d be friends with: band kids or people who play instruments.”

Although Color Guard is about having fun and meeting new people, according to Hollimon and Woitesek, Wiles expects dedication and hard work put into every performance from the student participants.

“It can be fun, but it will be hard work,” Wiles said.  “At the end of the day, if you were to ask the nine kids on Color Guard if they love it, I’d like to think they say yes.”