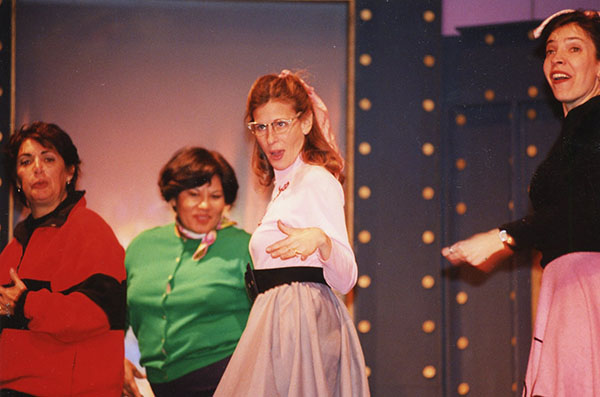 TIME’S UP FOR TITAN: Performing on stage, Beth Barber, English and Drama teacher looks to the audience during her act. Barber is retiring after 34 years of teaching Drama and English at South.

From directing plays to grading essays, Beth Barber, English and Drama Teacher, believes her time at South has been incredibly rewarding. After 34 years in the classroom, Barber is savoring the last few days she has with her students and looking back on every moment of her career here at South.

Barber says she knew from a young age that she wanted to be a teacher. Although she started as a pre-law student in college, Barber switched major paths in order to follow her original passion in theatre and teaching.

Fast forward during her career at South, Barber says she has taught everything from Drama and Broadcasting, to Communications and English. According to Barber, her favorite production to put on while being a Drama teacher was called “Playing For Time,” a musical based on a true story about women who played instruments to survive during the Holocaust. She says productions like these are what feed her passion for drama.

“I have warm and fuzzy feelings when I think back about the people in [“Playing For Time”],” Barber said. “Drama is my first love. It’s not to make a world full of actors because drama is so much more important that, it’s about building self-esteem and confidence and friendship and team building.”

One of Barber’s Drama students, sophomore Allie Vogelmeier, believes she got her passion for the arts by being inspired by Barber’s teaching.

Vogelmeier says she enjoyed working alongside Barber during projects such as Comedy Sportz and the winter play “12 Angry Jurors.” According to Vogelmeier, Barber has been a big influence on previous South students and their decisions to strive for careers in theatre.

“There are so many students that have gone on to theatre because they’ve had Barber as their teacher,” Vogelmeier said. “I think it’s [because of] the passion that she instills in students that have had her. Her legacy is allowing people to go forth in their passion, and giving them good tips and skills to go on with.”

John Knight, English, Drama and Broadcasting teacher, says he has learned a great deal about patience from Barber during the 13 years he’s known her. Knight says he admires Barber’s thoughtfulness and positive attitude.

“She always has a smile on her face,” Knight said. “She cares deeply about her kids and works all kinds of extra hours to help [her students].”

Knight hopes Barber will continue her love for theatre after retiring by working with a theatre program for people with disabilities called Special Gifts Theatre. Vogelmeier says she is devastated to hear about Barber’s retirement, but she knows it won’t be the last she sees of her.

“The smiley person I see every day I’m [suddenly] not going to see anymore,” Vogelmeier said. “It makes me really sad but I hope she goes on to do amazing things.”

After retiring, Barber says she still plans on keeping herself occupied. She has other passions outside of teaching that she intends on continuing, such as being a pilates instructor and teaching senior citizen improv classes.

“I thrive on being busy, I always have and I don’t see myself sitting around and watching T.V. all day, I don’t think I’ll be that kind of person,” Barber said.  “I know a lot of people who are retired who say, ‘I don’t know how I did it all because I’m just as busy,’ so I hope I’m one of those people too; I think I will be.”

Looking back at her career, Barber says she wants to encourage her students to work hard for the things they want in life.

“Sometimes you think you’re hitting your head against the wall but you just have to keep on trying,” Barber said. “And then sometimes you have to know when it’s time to go.”