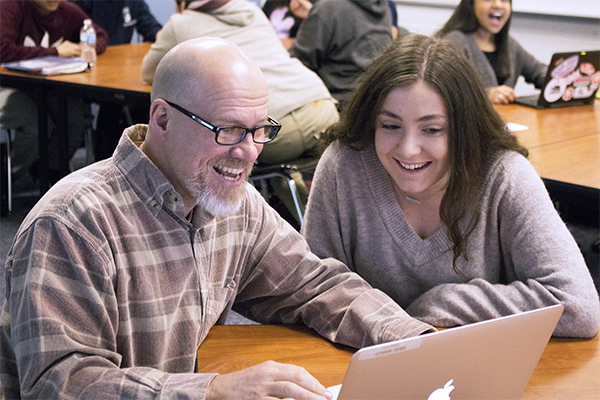 HICKS LENDS A HAND: Opening up his laptop, Daniel Hicks, social studies teacher, pulls up a presentation for junior Eva Papajohn about the singers Little Richard and Chuck Berry as a supplement for his lesson about 1950s pop culture. Hicks’s journey to become a teacher has been unorthodox, but he views his story as a source of hope for others.

Whether it be living in foster care, the military or in a rural Southern town, the life of Daniel Hicks, social studies teacher, features many experiences foreign to most students at GBS. His life began in rural Tennessee and now, after many ups and downs, Hicks is here, almost five hundred miles away from where he started, happy with how things have turned out.

“Education was not a priority in my biological home…but when I was in Elihue Williams’ home, it was everything,” Hicks said. “He would give me books to read for the fun of reading…Think about that: reading a book for fun. It’s amazing.”

Hicks considers foster care to have been beneficial to him, in part because of the role models he met, but also because of the lessons he learned along the way.

“[In the foster homes], one of the things that struck me was the power of love and the power of caring for another individual that might not be of your own making,” Hicks said.

Hicks says he originally wanted to become a lawyer to help children that faced the same challenges that he did growing up. Ultimately, he became a teacher so he could still work with kids who struggled with hardships in their life.

“I always thought that maybe I would be a juvenile lawyer and give back in a way that I had seen lawyers work in my life to help kids that were misguided at times,” Hicks said.

According to Hicks, his college professor was the one who suggested that he should become a teacher to fulfill his goal of helping children.

“The pursuit of knowledge is really what the educational field is about,” Hicks said. “I thought I might enjoy that a little better, especially considering I always wanted to be a lifelong learner.”

To pay for his studies, Hicks enlisted in the military. He didn’t particularly enjoy all the time he spent in the army, but he says he values the lessons he learned.

“The military gave me a greater sense of discipline that I was really lacking,” Hicks said. “[It also] helped me with finding a little more purpose for my life and trying to look at the greater good as opposed to individual selfishness.”

According to Hicks, religion was also a big part of his early life. He was introduced to Christianity at an early age, mainly through his grandmother, who was devoutly religious. However, Hicks’s tumultuous early years of his life caused him to begin to question religion as a whole and stop practicing Christianity.

“I began, at a very young age, to question religion’s legitimacy,” Hicks said. “I felt that I was a pretty good person and I couldn’t understand why this sort of all powerful, all-benevolent being would bestow such a horrific life on one of his innocent beings.”

According to Hicks, he went through phases of being atheist and agnostic until Hicks’s wife introduced him to Judaism and he began to embrace the religion.

“I would say that [converting to Judaism] gave me a new sense of hope,” Hicks said. “I think it changed my life dramatically in terms of the culture and anything from, really, foods to celebrations to looking at religion from a different perspective.”

Senior Zoe Gunderson, a student of Hicks’s, believes that Hicks is very different from other teachers at GBS.

“I think that Mr. Hicks is one of the most unique teachers I have ever had,” Gunderson said. “He is fond of using personal stories to get information across.”

Hicks uses his own story as a source of hope for others and as proof that no matter how bad things get, they can always get better. In times of hardship, Hicks looks to a poem, “Don’t Quit” by John Greenleaf Whittier, to remind himself not to give up.

“Life is definitely a rollercoaster,” Hicks said. “[As John Greenleaf Whittier writes,] ‘When things go wrong, as they sometimes will, when the road you’re trudging seems all uphill, when the funds are low and the debts are high, and you want to smile but you have to sigh, when care is pressing you down a bit, rest if you must, but don’t you quit.’”