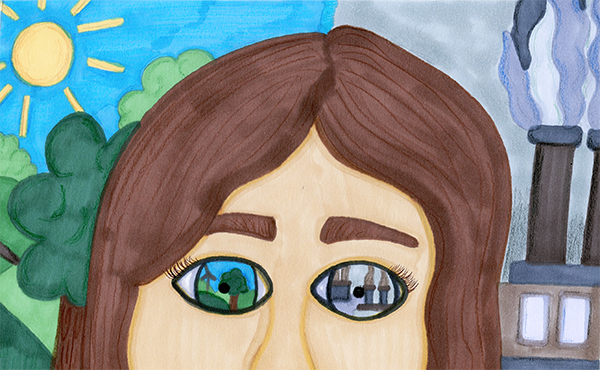 On April 22, 1970, over twenty million Americans participated in the first ever Earth Day to voice their support for more sustainable practices with regard to man’s relationship with the natural world. Today, the event has evolved into the world’s largest secular holiday, with over one billion participants in 2016, which was also the year the Paris Climate Agreement was signed by 195 countries in the United Nations, according to earthday.org.

In recent years, the environment has become a highly contested and controversial topic of discussion within the economic and political realm. South students and faculty have varying reactions to the state of the environment and share their opinions with the Oracle.

James Glynn, AP Environmental Science teacher, considers his collegiate background in both history and chemistry as the catalyst for his desire to teach the subject. Glynn explains that the goal of the course is to educate students on current environmental issues to allow students to reflect on how such issues can impact their lives in Glenview. Glynn further articulates that the scope of environmental education has not reached its fullest potential at South.

“We try to make it as personal a class as possible, so we try to [assess] a lot of local things,” Glynn said. “Students, when they run across environmental issues, tend to gravitate to the charismatic situation; they want to save polar bears, they want to save the Amazon rainforest as opposed to picking up garbage in their backyard. Our goal is for every student in the school to take the class — I’m not joking.”

Many people do not know the proper caveats to recycling, Glynn explains. Junior Hannah Wittenstein says she aims to practice proper recycling methods in her everyday life, such as making sure recyclables are washed clean of leftover food. She and her family are extremely conscious of their personal waste and have ingrained recycling into their daily routines.

“We use brown [paper] bags from grocery stores and fill those up with any paper and plastic things,” Wittenstein said. “I remember when I was younger, my parents always [taught] me to wash out plastic containers before recycling them, so what [we’ll] do is throughout the day, we’ll rinse out yogurt cups or whatever and leave the empty ones next to the sink and at the end of the day we’ll … put them all into the recycling bin.”

Senior Tricia Katsamakis finds ways to cut down on everyday plastic usage simply using an online search. Katsamakis recently purchased aluminum straws as part of a broader nationwide initiative to reduce the effects they have on the environment. Utilizing reusable mugs and straws can go a long way to limit everyday plastic consumption, Katsamakis says.

“It’s annoying that I have to get a plastic cup and plastic straw that I have to throw away [when I finish], so I really want to bring my own mugs to places to get drinks and start using reusable straws so I don’t produce so much plastic,” Katsamakis said.

Senior Juliet Jiaras explains that she also strives to maintain an environmentally friendly lifestyle. Jiaras explains she was raised a vegetarian but made the jump to veganism at the start of her junior year.  She says the change was primarily for ethical reasons, but as she embarked on more research, she discovered how the production of meat and dairy affects the environment.

“First of all, we’re cutting down more trees and rainforests to provide room for cattle to live,” Jiaras said. “Cow farts are literally burning holes in our ozone layer because they’re [composed] of mostly methane [since that’s] the way their digestive systems work. The more cattle there are on earth, the worse it is for the environment. If everybody in the world had one day a week where they didn’t eat meat, our greenhouse gas emissions would go down [substantially].”

Jiaras says her respect for nature and the environment stems from her mother. She explains that her mother marched on Washington to combat animal testing laws when Jiaras was young. Throughout her life, her mother’s passion for animals and plants has inspired Jiaras to adopt similar values.

“I’ve grown up in a household that is pro-animal rights and animal friendly, so that had a big influence on me,” Jiaras said. “She’s also always been super into gardening, trees and plants. [She] has taught me about how great trees are for the environment, so I think that her passion sprouted my passion and I just ran with it.”

Similarly, senior George Wood accredits his admiration for nature and his strong ambition to preserve it to a particular role model in his life: Steve Irwin, an Australian zookeeper and conservationist.

“When I was six or seven I went downstairs and my parents sat me down and said, ‘George, we have something kind of tough to tell you: Steve Irwin died,’” Wood explained. “It was this weird juxtaposition of this guy who gave everything to nature, and yet it still got him. After that I respected nature [while at the same time, having] an inherent fear … of its power.”

Wood says he plans to pursue environmental studies as his major in college. He accredits a lifelong appreciation of nature as well as his experience in AP Environmental Science as his reasoning behind the decision.

Senior Claire Utter is planning to pursue environmental law at the University of Colorado at Boulder. She says her ultimate goal is to fight for the rights of the environment and increase the respect humans show towards it.

“My biggest goal personally [since I’ve been in] high school is to become an environmental lawyer,” Utter said. “[As humans,] the Earth does not belong to us, we belong to the Earth and I think we should respect that, [but] right now we’re not.”

Senior Michael Heftman, on the other hand, views environmental predictions as problematic. He sees the overall skepticism revolving around climate change as a weak basis for arguments.

“The earth has been here millions of years; to say that you can predict what’s going to happen by just looking back 100 years or something, I just don’t think that’s looking at the big picture,” Heftman said. “Weather is so unpredictable. To be able to say you can predict what’s going to happen in the next year or five years: I don’t think it’s possible.”

“What I’ve noticed is everything with regards to climate change and global warming is always a computer model, and there’s never any hard evidence,” Heftman said. “It’s always someone just computer modeling something that they think could happen and it takes everything out of context.”

Wittenstein believes that the administration of President Donald Trump has downplayed environmental issues, which concerns her. She explains that this has contributed to her reevaluation of how she, as well as the public, recognizes Earth Day.

“I think more than ever, because of  leaving the Paris Climate Agreement and Trump’s denial of climate change and his entire administration’s lack of funding and importance placed on the environment, Earth Day is all the more important just to remind people that the earth is being negatively affected by human activities and we have the ability to stop that,” Wittenstein said.

Utter sees the usual teenage approach to celebrating Earth Day as superficial. She believes the typical Instagram post does not show true concern and desire for activism that should be present on Earth Day.

“On Earth Day, maybe instead of posting an Instagram picture about how pretty your trip to Jamaica was, people can just go out, pick up trash, help the environment, get educated on what’s happening or even just go on Netflix and watch [some] documentaries,” Utter said.

Wood perceives technological progress as the main argument for man’s deteriorated relationship with the natural world. He advocates for an better understanding of our roots, and how we came to this state of being in regards to nature.

“I think at some point in time in the past two hundred years, humanity has lost their connection to any portion of the natural world,” Wood said. “The developed world sees nature as place you can go sometimes and not as the powerful untamed beast where we came from. We emerged from nature victorious, and now we have to respect nature because we have to coexist with it.”