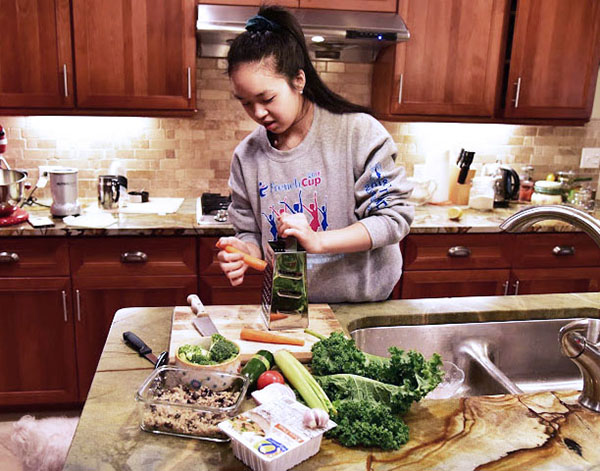 SLICIN’ AND DICIN’: Grating a carrot, junior Rachel Luo prepares vegetables for her tofu scramble. Luo enjoys cooking healthy recipes as a way of relieving stress, while also being able to incorporate raw and organic foods into her diet.

Anything that someone encounters in their lifetime can be connected to some aspect of their health, according to Kelley Oziminski, health and physical education teacher. The trick to a healthy lifestyle, health teacher Courtney Middleton says, is striking balance among those connections and good habits.

According to Oziminski, a healthy lifestyle consists of three main aspects: mental and emotional health, physical health and social health.

“I am constantly making sure I find balance in those three areas of health,” Oziminski said. “That is when I’m happiest and healthiest.”

Senior Kate Freidinger participates in a kick-boxing workout at 9-Round, a gym with continuously rotating workout stations, three to four times a week. According to Freidinger, 9-Round is a beneficial workout because it is difficult, but quick. Freidinger says she has found that working out with a friend is often more beneficial than working out solo.

“For me, [having a friend] always makes me go work out,” Freidinger said. “Knowing I will be hanging out with friends makes it easier and it pushes me.”

Junior Brandon Matias believes living a healthy lifestyle has always been a goal. Matias says he started martial arts at age four, became a black-belt by age eight, and  has continued physical activity through kick-boxing, and South’s baseball team. Matias thinks participating in sports and activities is beneficial for social health in addition to physical health.

“You are forced to be with a bunch of people, so you have to make friends,” Matias said. “Those friends can end up being long-term friends, and as soon as that happens you can end up playing with those friends for years.”

Physical  activity also provokes healthy eating, according to junior Charlie Schultz. Schultz said he cuts sugar from his diet during the track and cross-country season in order to improve his performance during his more important meets.

“The hardest part is fighting the temptation,” Schultz said.“[But I] definitely feel better during runs [when I eat less sugar].”

Senior Lily Smith described a similar struggle of temptation battle in her commitment to the Whole 30 diet, which restricts certain foods like dairy, sugar, and bread for about 30 days.         According to Smith, she began the diet to alter her relationship with food and to feel healthy after eating.

“The hardest part was probably just getting into it,” Smith said. “By the end I thought I could continue, but I [had been] limiting myself so much that I wanted to go back and have a good relationship with food.”

According to Health Teacher Laura Duffy, it is common for students and athletes at South to overwork themselves in sports or academics, which can be detrimental to their mental and  physical health.

“Students here get stretched too thin trying to be perfect,” Duffy said, “I always tell my students, ‘It’s not about being perfect, it’s about being solid.’”

According to junior Rachel Luo, she herself uses her passion for cooking as a method to alleviate stress as a student and dedicated figure skater. Luo says that healthy cooking gives her time to relax and forget about the stress and pressure from school.

“It gives me a bigger picture on life and [reminds me] not to stress over little assignments,” Luo said.

According to Oziminski, taking one small change can cause a domino effect, creating more changes within one’s lifestyle.

“After [they make a small change], they can start seeing this domino effect of one specific change they make,” Oziminski said.

Duffy agrees, and thinks staying mentally healthy encourages students to focus on their interests in life, rather than feeling obligated to please others.