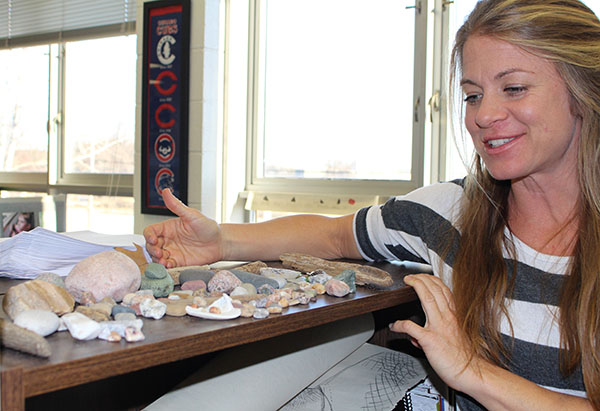 ROCK N’ ROLL: Looking at her rock collection, Emily Ekstrand, social studies teacher, talks about her passion for collecting rocks. Ekstrand believes the rocks add a special element of nature to her classroom.

“[When] I was in Aruba in second grade, we were walking in the town, and I saw the license plate,” Piechowicz said. “[Now] it’s completely tattered, but it’s my favorite because it’s my first one.”

According to Piechowicz, his collection currently includes over 50 license plates from across the world. The license plates are symbolic of his interest in travel.

“I like going to new places,” Piechowicz said. “They are mementos from all these places I’ve been.”

Cavallaro said he collects volleyball jerseys for his passion for volleyball. Each year, his club volleyball team attends a national tournament where a tradition of trading jerseys happens among the club teams.

“Every once in a while I’ll get a jersey that I will take back and trade,” Cavallaro said. “Half the stuff I have is sitting in my closet for next year.”

According to Cavallaro, certain athletes will pay others for their jerseys.

“I’d rather have money than the jerseys but [jersey trading and collecting] is also for the memories,” Cavallaro said. “When I am done with college or even if I don’t play in college, I’m going to look at [the jerseys] and think of the cool memories.”

Jiaras began collecting patches to iron on her jean jacket this year. They currently total 20 and counting. Jiara says her jacket and collection reflects her interest in fashion and self-expression through her different patches.

“[Collecting] is a way for me to represent things that are important to me, but it also relates to having a cool piece of clothing,” Jiaras says.

“It’s useful to make the connection to what we talk about,” said Rhoades. “[We ask] what does that look like and how comfortable are we with it?”

Emily Ekstrand, social studies teacher,  holds a passion for collecting rocks. She believes having nature in a classroom helps connect students to the outside world.

“I think it’s cool to have elements of nature in the building, especially in a windowless classroom,” Ekstrand said. “You know when you’re stressed or bored in class? Sometimes it’s nice to have something in your hand.”