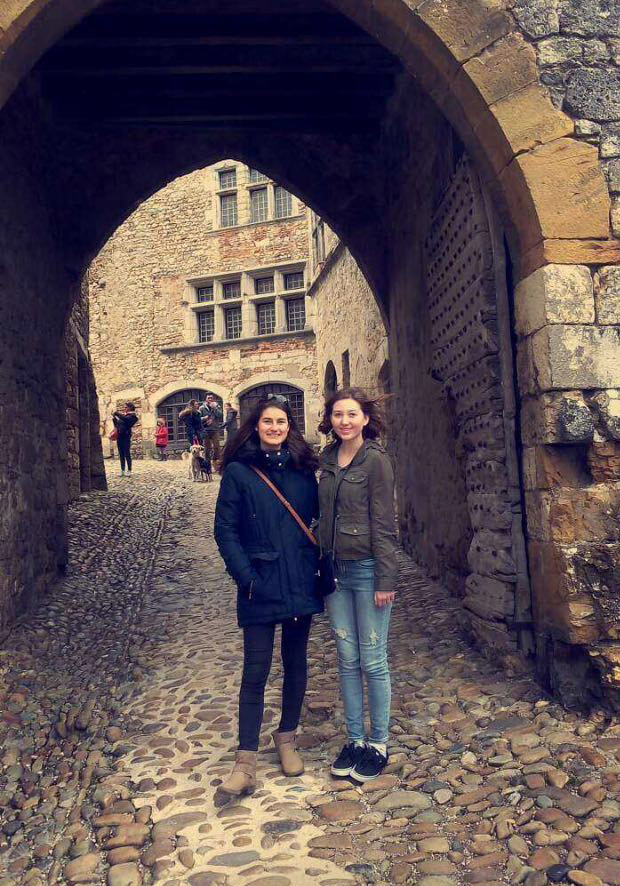 Being able to speak more than one language is an impressive feat, but four? Kayt Ribordy, a native English-speaking senior, is the president of French Club, co-president of Spanish Honors Society and a member of German Club. These activities are just some of the ways Kayt maintains, improves and expands her multilingualism.

Ribordy began learning her first foreign language, French, in grade school. According to Ribordy’s mother, Eileen Ribordy, Kayt was considered advanced for her French class, so she began to independently learn Spanish in tandem with French. According to Kayt, she now speaks French, German, Spanish and English.

“The great thing that keeps me interested is that you will always have some use for language,” Kayt said, “There will always be some situation in which you have to use [your skills].”

According to Ribordy, she met with Danita Fitch, World Language Department instructional supervisor, at the end of her freshmen year with hopes of moving into a Spanish class. Fitch said she found Kayt to have an unparalleled gift in learning foreign languages and advanced Kayt, a student with no formal Spanish lessons, to Spanish level four honors class.

“I don’t think there are any teachers here that could compare with Kayt’s potential to study these languages,” Fitch said.

“It’s not like I’m some language genius and it clicked immediately,” Kayt said. “If you speak English, you have learned a language. [People don’t realize] they can do it again so easily.”

Kayt’s language achievements have not gone unrecognized. According to Kayt’s sister, Anne Ribordy, after taking the National French Exam, Kayt qualified for a summer abroad scholarship program interview. However, as she was not 18 years old, Kayt did not meet its prerequisites. Despite her inability to claim the scholarship last year, she hopes to qualify again this year, Kayt says.

Kayt has also qualified for the Seal of Biliteracy, which is awarded to a student who is fluent in two or more foreign languages; according to Fitch, Kayt stands apart from those awarded last year because the languages she has learned were taught through school or out of her own interest.

“Kayt is someone who previously knew none of those languages,” Fitch said. “French, Spanish, and German. None of those are heritage languages.”

According to Anne, Kayt’s language fluency is also recognized in settings outside of school. Kayt translated for her family on their trip to Germany, allowing them to connect to the people and culture.

“It’s crazy, like we would go to a different city and there are people talking in a different language in front of us and she would be like listening in on their conversations and they wouldn’t know,” Anne said.

Understanding the ways language affects culture are things Kayt considers to be very  beneficial. According to her, simply visiting a foreign country is extremely different than the art of actually comprehending the language.

“I think it’s so cool, the different things I would notice living in the country versus if you are just visiting,” Kayt said. “Especially if you speak the language, [it allows you to] experience the country as a native would.”

According to Kayt, she continues to learn bits and pieces of other languages today through friends and online apps. She hopes to work in a field that employs polyglots in the future, Kayt said.

“Something in international relations would be cool,” Kayt said. “Or even a language teacher. [Teachers have] given me a more globalized perspective of the things I could achieve if I [continue] learning different languages.”