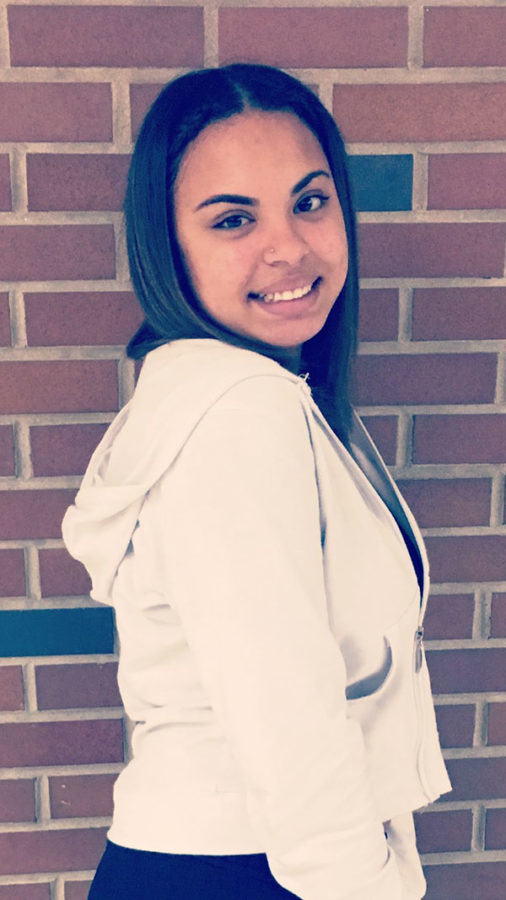 ANGIE THROUGH THE AGES: Posing for a photo at GBS, rising senior Angie Morris shows her signature smile, one that many at school were accustomed to seeing, according to Ken Smith, Special Education teacher. According to Katie Mason, Morris’s sister, she was the youngest of six children in their family.

Rising senior Angie Morris was a teaching intern in the Child Development program. She worked with children in Titan Tots and Alphabet Acres, according to Kimberly Kiraly, Child Development coordinator. She was scheduled to graduate in January. Morris then planned to take courses at Oakton Community College and become an early childhood educator. Morris passed away on July 8 after being shot in the head the previous night in Des Plaines.

“She made the sad moments good.”

Those closest to Morris say her positive personality and perseverance helped them see the brighter sides of situations. Ray Hurssey, South alumnus of 2017, met Morris his sophomore year and remained close with her throughout high school. Hurssey says through her friendship, she uplifted him and others during their struggles.

“She was just a bright little spirit,” Hurssey said. “If you were having a hard time in school, she could cheer you up in a second. She was that type of person to make you smile.”

After a homecoming football game loss freshman year, senior Jay Covington says he felt Morris’s kindness and uplifting attitude when she made the situation lighter despite his own disappointments with the game.

“[Angie] just instantly made me smile after the game and made me laugh and just feel a lot better,” Covington said. “She told me all the positive aspects she saw in the game and that just helped me a lot.”

For Jodie Kelly, current Oakton Community College freshman, Morris was a longtime best friend and a trusted confidant. After moving to Indiana, Kelly stayed in touch with one person from Glenview: Morris. They remained friends long-distance until Kelly moved back to Illinois. From going to the movies and mall together to spending summers at her house, they talked for hours.

“She liked Cher a lot,” Kelly said. “If you were hanging around with her, she would just dance and sing all the time. She made the sad moments good.”

Morris’s positive attitude towards life also radiated towards her family. According to Morris’s aunt Sheila Blaje, her family tries to maintain the same point of view Morris had.

“[Angie’s] sister told me she’s trying to look at life the way Angie did, which was carefree,” Blaje said. “Forget about all the drama, forget about all the stupidity, you just want to enjoy life, and that is my whole outlook [too].”

As Katie Mason, Morris’ sister, and her family bear the loss of Morris, she hopes those Morris touched will remember her life, and try to live in a way she did.

“I hope people remember [Angie] as outgoing, joyful and happy because she was always happy even though she was stubborn at times,” Mason said. “[I hope that people] always remember that she wants all of us to smile and live for her.”

“She was very loving.”

On her bedroom wall, Morris had photos from her phone she printed out and taped up, including one of her and her nephew. Yaya Martinez, a friend of Morris’s who now has a son with Morris’ brother, says Morris would pull out her phone to take photos and videos of her nephew.

As an aunt, Martinez says Morris was “very loving” and patient. She played with her nephew, and when he cried, she wouldn’t get frustrated.

“The last time I saw her, I was in her room and she came, grabbed my son right away and started playing with him,” Martinez said. “She said, ‘I love you. You’re gonna love me when you grow up.’ She was just making plans with him. I cannot believe my son’s not gonna get to know her.”

Outside of her family, Morris had the opportunity to go to NSAE, an elementary school for children with emotional and behavioral disorders, with Lindsay Smigiel’s Consumer Education’s class. Every other day, the students would partner with children from NSAE and spend time with them.

Mason said, “She said that she loved [the students], that she could connect with them and she was always happy when she was able to make them happy even though they had difficulties. She wanted them to feel like they’re just like a normal human being and she was glad to make them feel that way.”

Working within South’s Child Development program, Morris found her passion working with young children. As a teaching intern, she worked with elementary-aged children, reading stories and leading them through activities.

“She was idolized by our 4 and 5-year-olds,” Kiraly said. “She was able to see them light up and see the light bulbs go up in their heads. They loved it.”

Although not blood-related, Martinez says Morris made her feel like a part of the family and even called her “sister.” When Morris’s family invited Martinez to a Thanksgiving meal, Martinez hesitated. Morris reached out to her through text and said that she wanted her at the meal with her.

“She would message me on Facebook and say, ‘Oh hey sister, do you wanna hang out today?’ or ‘Oh hey sister could you give me a ride to school today?’” Martinez said. “She made me feel accepted when we were among her family.”

“She just lit everybody up.”

Looking back on his time with Morris, Hurssey says he clearly remembers and still admires her confidence. Morris’s persistent individuality in the face of people who criticized her became an example for Hurssey, who says he wants others to remember the way she carried herself.

“She still took [her style] and flew with it,” Hurssey said. “We were people who were bullied by others, and she took that experience and turned it into a positive. She taught me to accept myself, so I got stronger.”

Kiraly says her favorite thing about Morris was the energy she brought into the classroom. At times, Kiraly said her and other students would be relaxed and quiet; then, Morris came and added an upbeat and bubbly personality to the classroom.

“Angie always walked into the room and you knew she was in the room,” Kirlay said. “Angie would enter in a very boisterous kind of way, but we loved that about her.”

In Morris’s absence, Ken Smith, Special Education teacher, says he can notice a lack of energy within the building, which she brought to their program and the people within it. As well as being a friend to her peers, she was also a friend to adults at South, Smith says.

“There are lots of parts of this building that don’t feel the same to me as they did last year,” Smith said. “When she laughed and smiled it just lit up everybody.”

Morris also spoke her mind with confidence. Smigiel says everybody knew Angie because of her honesty and that people could tell if she liked or disliked them. Hurssey agrees, saying that she always spoke her mind, no matter the consequences.

Smigiel said, “She was probably the realest person I’ve ever met.”

Smith says he met Morris when she was an eighth-grader touring GBS. His first impression was indicative of the person Morris was in the classroom, he says.

“From the very first moment, I could tell that she was energetic, outgoing and had a positive impact on everybody she met,” Smith said.

“She poured every ounce of herself into it.”

One year, when Morris tried out for the cheer team and didn’t make it, Martinez said that she was upset at first. After, however, Morris began practicing with Martinez.

“I talked to her and said, ‘We can work on it so next year you can try out,” Martinez said. “She didn’t give up.”

When faced with a set of skills and tasks, Smith says Morris knew she wasn’t going to excel at everything she tried. But when she did find something she loved, it consumed her in the best way.

“She poured her whole heart and soul into [her passions],” Smith said. “When she was working on a project for the Titan Tots center, she poured every ounce of herself into it.”

Morris’s goal-oriented and hard-working attitude is something for people to remember and try to emulate, Kiraly says. In spite of her personal obstacles, Morris followed her dreams and had a plan to make them into a reality.

“That’s a lesson people can learn from her and take with them: always set goals for yourself and, despite any roadblock that you run into, keep going after it,” Kiraly added. “When people are wanting to give up, they need to remember not to, because Angie wouldn’t have.”