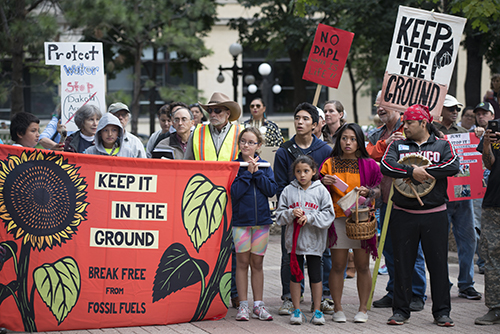 PIPELINE PROTEST: Demonstrators against the Dakota Access Pipeline (DAPL) in St. Paul, Minnesota in Sep. 2016. The DAPL attracted many supporters and opposers that initially halted its progress, but ultimately continued construction in March 2017. Photo courtesy of Fibonacci Blue https://www.flickr.com/photos/fibonacciblue/29554803662

A transition in presidencies often results in a transition in executive policy, holding true for President Trump’s executive order calling for the resumption of construction on the Dakota Access Pipeline on Jan. 24. Trump’s action directly negated President Obama’s order issued weeks before the end of his presidency, which halted the construction of the pipeline through the Standing Rock Sioux Reservation. The American people, including various South students, have responded to the controversial topic with strong conviction.

Senior Max Shapiro felt outraged by what he perceived as the government’s complacency regarding the treatment of the protesters of the pipeline. According to Shapiro, he was disgusted by the severity with which the police treated the opposition, physically beating and forcefully spraying protesters with hoses.

“My moral reaction was that the government is effectively seizing protected Native American land here, and the government allowing contractors to disrupt that land is in violation of the law,” Shapiro said. “We’ve already claimed so much land from the Native Americans, and we set aside reserves for them, so what’s the meaning of that if we’re just going to steal it?”

Senior Alex Velis, however, supports the construction of the pipeline, mainly for the economic advantages that it provides for the United States. According to Velis, the area of the pipeline in question lacks validity in its claim of being a site of religious importance.

“It seems like the [opposition] could make the argument that we are trampling on the Native Americans, and it’s just another instance of the American establishment taking advantage of them,” Velis said. “But to me, there’s more than enough precautions [being] taken to make sure that the pros outweigh the cons [of constructing the pipeline]. An economic boom, a lot of jobs, energy independence, better infrastructure for our nation, is a lot of benefits.”

“When [the United States] is producing our own oil, we don’t have to buy oil from foreign countries, which ultimately will have tariffs […] and will cost us more than if we’re producing it ourselves,” Dunk said. “I remember when I was little, it almost got close to five dollars and now oil is much cheaper, and I think that’s a result of how much we’ve been producing at home instead of importing it from far away countries in Asia.”

Conversely, according to senior Dani Revello, the environmental and moral costs of building the pipeline far outweigh the positives in the temporary jobs it creates and the transportation of oil.

“I’m pretty liberal, and I am very aware of the environment and climate change,” Revello said. “The building of the pipeline could potentially have a very large effect on the environment. I think my stance reflects how I feel about environmental policy and how I don’t agree with how the new EPA director doesn’t believe in climate change.”

Dunk takes on a different perspective on the pipeline in regards to the environmental costs. According to Dunk, importing oil internationally provides greater risk for spills than transporting oil via the pipeline within the U.S.

“Basically, there’s a lot higher of a chance of oil being spilled if it’s shipped by train, which is how most of the oil is being shipped now,” Dunk said. “When you build a pipeline, the chance of an oil spill goes down dramatically. Environmentalists were saying that the construction of the pipeline will contaminate water, but there’s an even higher chance [of that] happening [while transporting oil], so it’s kind of hypocritical to their point.”

Looking to the future, Shapiro believes that the construction of the pipeline will not only result in poor consequences for the environment, but will also set the expectation that economic benefit comes before potential environmental or moral concerns.

“People need to be making a bigger deal about this,” Shapiro said. “It’s a slippery slope, and we’re setting a bad precedent here when we say it’s okay to claim the lands of indigenous people who did nothing wrong. I just think it’s awful. I’m kind of in shock and disbelief that our leaders can do something so against the will of their constituencies in order to benefit corporate interests.”

“I hope I’m not seen as very ignorant on the issue, but obviously, I’m not Native American,” Velis said. “I don’t know how important [the reservation] is to them; therefore, I can’t really understand. But at the same time there are so many more benefits – the net benefits are incredible. And who says it can’t help the Native Americans?”

According to Revello, above all political perspectives comes the right to opinion, and to voice that opinion and be heard. While each side may be arguing for different results, according to Revello, compromise is best achieved when both sides are accounted for and listened to.

“I think that’s one of the most important things: the right to assemble, and [the right to] freedom of speech,” Revello said. “[…] This entire country has been built off of people protesting what they [believe is unjust], and that’s why democracy works. The people have a voice and power to say what they think is or is not right.”