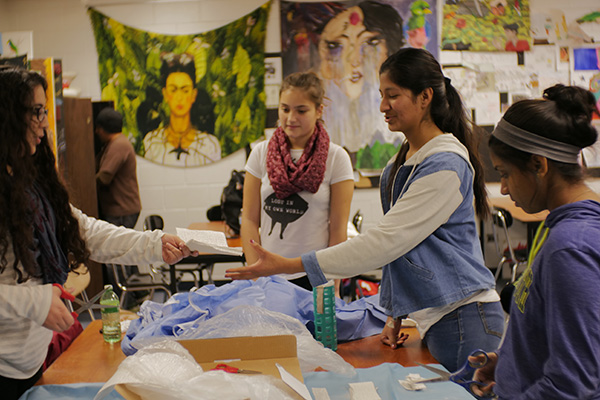 HANDING HOPE: Preparing for an art project on facial expressions using ceramic "masks," members of Students Organized Against Racism (SOAR) discuss the impact of racism in their communities. The club hopes to utilize personal stories to make members feel more comfortable talking about race and the problems surrounding racial identity.

Senior Gracie Rajaramsiva makes her way down the hallway. She stops and turns the handle to open the door to Room 224. At her Students Organized Against Racism (SOAR) meeting, Rajaramsiva feels she is always comfortable around her fellow club members, and knows she can speak her opinion without any judgement.

SOAR is a club that was started informally last year by five seniors, Monce Lopez, Danelia Santos, Luiz Alonso, Giselle Montasinos, and CJ Castro, and is sponsored by Social Studies teacher Emily Ekstrand.  At the beginning of this year, according to Ekstrand, the group decided to become an official club. According to Ekstrand, the club is a place where all students can come to meetings on Thursdays in room 224, and not only discuss the topic of race but also educate one another about it.

“This year, the students and I thought it would be a good idea to open up the discussions so everybody can participate in these discussions about how race impacts people both at Glenbrook South and in society in general,” Ekstrand said.

“It’s a club where I can talk about my color and being a person of color without any judgements or without being afraid of someone thinking I am racist towards people of color,” Rajaramsiva said.

“I do think there is a need for students to talk outside of the classroom and to come together and to discuss these things,” Ekstrand said.

As of now, the club is mainly consisting of discussions during their meetings. Rajaramsiva says they have also held a bake sale and attended a Gay-Straight Alliance (GSA) candle lighting. Soon, they are planning an interactive art piece on integrity, and would like to bring in speakers for the school, according to Rajaramsiva.

Ekstrand said, “We were thinking of doing an art installation on identity. Each person would make a mask of themselves, and be able to show it to the student body, having their parents coming in, to be able to have school conversations on identity.”