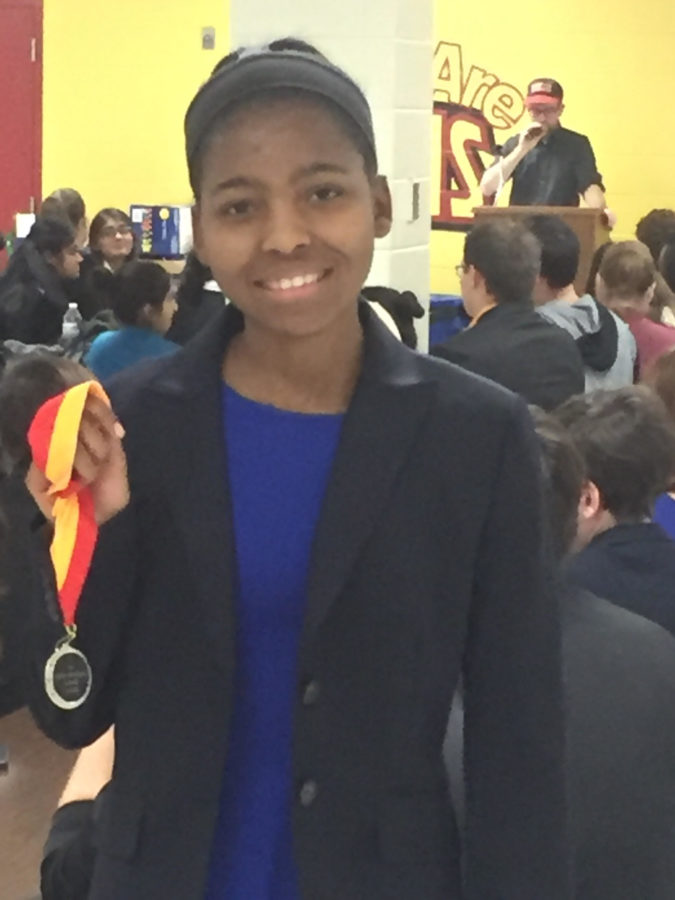 Successful Speaking: Holding her medal, senior Cassidy Jackson poses for a picture at the Schaumburg Speech Tournament that occurred on Nov. 19. Jackson placed second in the Original Oratory category in which she wrote a five paragraph speech on a topic of choice with a goal of persuading her audience. Photo courtesy of Nancy Schultz

A successful speech team works toward their goals not by sheer luck, but with practice, dedication, teamwork and plenty of support, according to Jidapa Thia, Speech Team co-captain.

Thia believes that though speech competitions are individual, the mutual support shared by the members is key to their accomplishments.

According to head coach Nancy Schultz, South’s speech team has always been a force to be reckoned with as they have gone to the state tournament almost every year since the program began in the late 1980s.

“We do have, I would say, one of the most competitive areas in the state of Illinois,” Schultz said.“It’s very, very difficult in our area to be one of the top three in your events at sectionals.”

Schultz believes that the key to their success is in their practices, where most of their work occurs. When Speech Team has meetings, which are held on Fridays, Schultz meets with the members to discuss upcoming tournaments, reflect on where everyone is at with their pieces and discuss ideas for improvement.

“The kids have to get in at least once a week with their coach,” Schultz said. “As we get closer to tournaments, though, kids come in more than once a week.”

According to Thia, the different categories of speech at tournaments cater to all members of the team.

Thia and Neuson both feel that in them great life skills. Thia believes that participating in the Speech Team has instilled confidence in her and help with her public speaking skills.

“For me, I can come up with a speech on the spot,” Thia said. “I can talk to [judges] about a lot of different things, even if I wasn’t sure what I was talking about a minute ago.”

Schultz explained that other factors play a big role in winning too, including the support of their fellow classmates. With these factors in mind, Schultz believes South Speech can bring home another state championship this year.

“I just feel like we have the support of the school, which is very important,” Schultz said.