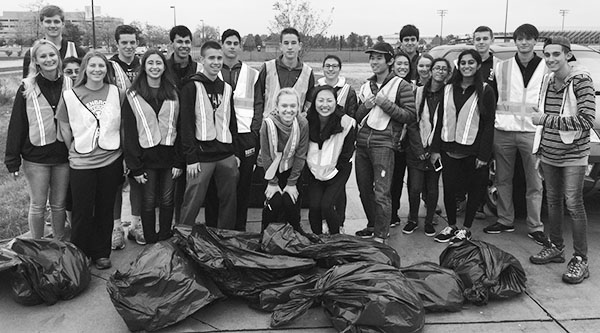 This year’s service theme for GBS clubs is centered around environmental awareness. In a time of rapid environmental change due to human activity, GBS students may be able to make a lasting difference on the community, according to Lisa Pavic, AP Environmental Science teacher. Pavic believes the time for change is now.

“We can’t keep ignoring that [environmental damage] is happening, and we can’t keep thinking that someone else will take care of it,” Pavic said. “The little things that all of us do can hopefully add up. I hope that kids realize that they can make a difference and they don’t feel like they can’t do something for this vast, huge earth.”

Key Club has begun to follow the service theme, working to make a difference in the community. Josh Koo, Key Club sponsor, was thrilled when Dr. Jim Shellard, assistant principal of student activities, presented the matter of environmental awareness this year.

“One thing Key Club wanted to do for a while […] was our environmental committee,” Koo said. “They focus on events that make impacts through local environmental initiatives like cleaning up certain areas, or beautifying parks, or working to help Glenbrook South be more environmentally [green] with recycling initiatives.”

Junior Katheryn Woo, an environmental committee board member, is planning projects and events to bring better environmental awareness to GBS. She is working to incorporate the student population in simple steps around the school.

“Outside the Lyceum there’s this white wall and also [on] the dome of the field house,” Woo said. “We’re thinking of getting an outside projector there and then we can project images that will catch people’s attention that can raise environmental awareness. That can include anything ranging from environmental facts or [the] next environmental events that are coming up in Key Club.”

According to Woo, the environmental committee is also working on smaller, eye-catching displays. These displays will be presented indoors during lunch periods.

“We will have these hologram prisms that you can put on top of your phone [which] projects the hologram in the prism,” Woo said. “We’re thinking that we can project some environmental images there.”

Similarly, South’s Interact Club has also centered some service events around environmental awareness, according to Zach Cepeda, Interact president. One annual event that fits with the theme is the Beach Sweep, where members go to the Evanston beaches to pick up garbage.

“There’s a lot of garbage in [the] rocks that can be dangerous to animals and to people so it’s a really good opportunity to make a difference in the environment and the community,” Cepeda said. “[Also,] in the fall, we do an Adopt-a-Highway event.”

According to Cepeda, Interact has “adopted a highway,” that includes a section of Landwehr Road that stretches from West Lake to Willow Road. Cepeda says that members go out to clean this area two times a year.

“I’ve driven down the road after we’ve [cleaned] it and you can see how clean it is,” Cepeda said. “It’s really satisfying because after you put in a couple hours of bending over and picking up trash, it looks nice.”

Cepeda believes that focusing on environmental awareness is important because it teaches Interact members about why they’re working to make a difference, and that they have the potential to impact the community.

“Not all impacts are going to be huge,” Cepeda said. “We’re not all going to be solving global warming. As a small club at GBS, we’re not going to do that, but every step that we take to make an impact is meaningful.”

Pavic hopes that once students are introduced to environmental awareness, a domino effect will take place in which students will continue to make a change.

“It doesn’t matter if you’re young or old or what [academic] level you’re at,” Pavic said. “Students really do care about changing. They just might not know how. Hopefully [these clubs will] give them the tools and opportunity to make a difference in the future.”