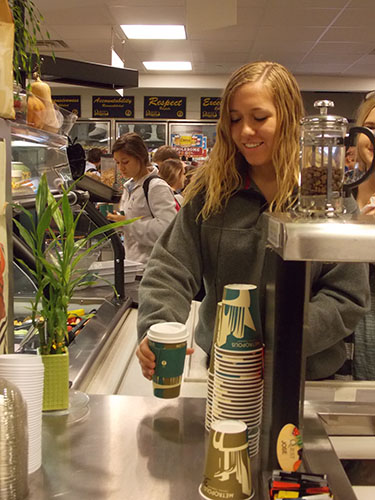 Caffeine Before Class: Fueling up for her day ahead junior Kati Ivanovich grabs a quick coffee before class, one of many hot beverages served daily in South's coffee station in the cafeteria.

The daily stresses of high school can at times be much for a student to handle. Classes, clubs, sports and other extracurriculars can accumulate into a tall order to fulfill. When low on energy after not having much sleep, many students turn to caffeine as fuel to get through the day. In a recent non-scientific Oracle conducted survey, 176 of 270 students, or 65% of students responded saying they consume caffeinated drinks such as coffee at least once a week.

For junior Amelia Papajohn, coffee serves as a flavorful drink she enjoys, and that the caffeine was just a plus.

“[Coffee] is creamy, sort of sweet but also has a lot of bitterness, which I like because I’m not a ‘sweets’ person,” Papajohn said.

In contrast to how Papajohn feels about the taste of caffeinated drinks specifically coffee, junior Taylor Keime explained how he’s had a different experience with his consumption of caffeine. Bilinski explained how for him, and for others he sees coffee being drinken by students to stay awake, not the flavor.

“There’s a lot of kids who drink coffee, and I think most people drink it for the effect of keeping them awake,” Keime said. “Very few drink it for the flavor. That’s my experience. It’s an acquired taste for me, so I just drink strong coffee to get the caffeine [from] it.”

Senior Jane Park explained how for her, she goes to caffeinated drinks such as Monster or Redbull in addition to her two cups of coffee a day. Park explained how she consumes these amounts of caffeine in order to stay up to complete homework.

“During finals, I’ll sometimes drink two or three monsters a day,” Park said. “I usually drink a lot so I can stay awake and study.”

In contrast to Park’s use of caffeine for school, Bilinski explained how she doesn’t usually drink coffee to stay up to do homework, but rather to stay up on the weekends with friends. Instead of going to bed at her usual time of 10 p.m., she stays up until at least midnight.

“Sometimes, I [crash at school], but that’s when I drink more than a cup,”Bilinski said. “Usually [I’ll crash] on weekends, when I try to stay up for longer periods of time. I’ll end up loading up on coffee, and then I’ll crash at like 12:30.”

According to Papajohn, she doesn’t think that she would be able to permanently cut caffeine out of her diet. Papajohn explained how she recognizes caffeine is not the best thing for her health, but she couldn’t do without it.

“I probably shouldn’t drink that much caffeine, but I like it too much,” Papajohn said. “It tastes too good.”

According to Bilinski, she hasn’t considered stopping drinking coffee, because she hasn’t witnessed any negative effects.

“I have gone a couple days without drinking it, I didn’t have any regular symptoms like a headache or something,” Bilinski said. “It doesn’t really affect me that much, but it makes me more alert throughout the day so I don’t think I would cut it out of my diet.”

According to Park, she doesn’t see herself cutting caffeine out of her diet anytime soon, either. Park explained how she agrees that taking caffeine breaks is beneficial, and how it will continue to be a part of her lifestyle for awhile.

“Even as a high schooler, I feel stressed out,” Park said. “I feel like I need to be on top of my game and I need to perform. I think as I grow older, that’s not going to get any easier. With more responsibilities, I’ll have more work to do, and I’ll just get more tired. It’s going to strain a lot on my body, so I think I’ll need it even more then than I do now.”

Park additionally explained how she depends on caffeine, and her thoughts in the future as she finishes her last year of high school.

“I don’t think I’m at that point [of dependence] yet, but maybe in the future I will be,” she said. “I can kind of see it coming my way. I know people who are [dependent on caffeine], and that’s kind of a scary thought for me.”