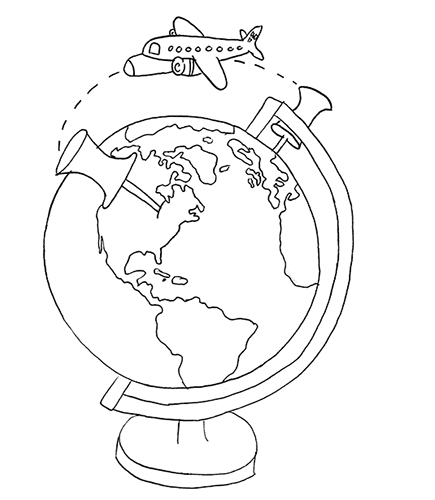 With a new language, culture and lifestyle, many South students have experienced and  have had to adjust to the American culture after immigrating to the United States. These students moved after they were born or lived all over the world. In fact, South currently has 136 students enrolled in the English Language Learners program alone.

One student who has gone through the transformation of moving to the U.S. is sophomore Eden Krenzel, who moved to America from Israel at the age of nine.

“I was very nervous,” Krenzel said. “It was scary, because I didn’t know anyone. I didn’t have any friends, and I didn’t speak English for the first year. I was very antisocial; I think I started blending in and making friends in middle school.”

For sophomore Shahnoor Shahzad, the move was a big culture shock in contrast to her country of origin: Pakistan.

“The language was a barrier, but that was something that I could [change],” Shahzad said. “Some of the societal norms were different because people [here] are considered to behave a certain way, and people in Pakistan behave completely different.”

Junior Benya Chongolnee was also born outside of the U.S., being raised in Thailand. Also, sophomore Christine Oh was born in South Korea and lived in Austria. They both had different experiences coming to the U.S., and both attended U.S.-based schools abroad. This made the adjustment less difficult.

“Since I was younger, I always came here because we have family members that live here,” Chongolnee said. “Before I came here, I went to an international school, and I knew the culture and I watched movies, so it was not a big surprise for me.”

Some of the greatest differences between life in the U.S. and life in their foreign homes is the manner in which people communicate with one another. Chongolnee pointed out that many people are more reserved in their actions towards other people they are unfamiliar with.

“People here are friendly, but I find people in Thailand [friendlier] because of their beliefs,” Chongolnee said. “For example, if you’re walking in the middle of a sidewalk and somehow slipped, if you were in Thailand, everyone across the street would all rush to help you […] Here, one or two might help, but the rest will walk away and pretend they didn’t see anything.”

Krenzel, however, described American behavior to be much more polite and courteous in comparison to her life in Israel.

“People here are more into the [holding of] doors, please and thank you type of stuff,” Krenzel said.

Oh also stated that there is a lot more freedom to make your own choices in the U.S. versus her former Korean and Austrian homes.

“The fact that people can do sports and music at the same time as studying is the most shocking [thing],” Oh said. “In Korea, you just study. You can’t really do both. You don’t have time to do both; you have to give [the extracurriculars] up.”

Despite obvious cultural differences in Thailand, Chongolnee found common ground with other foreign students and became friends with them upon moving to the U.S.

Shahzad believes that she and her family have adapted very well to their new lives by learning new languages and creating new lifestyles.

“I’ve gotten so used to the life here, and I’ve adapted to the language,” Shahzad continued. “I would love to go back and visit, but I don’t know if I could go back and live there forever.”

On the contrary, other students such as Krenzel continue to miss their homelands and hold a special place in their heart for their birth place.

“I guess for me, I’ve always loved the U.S., [because] my education, my friends and my life are here,” Krenzel explained. “But there is always that bit of nostalgia whenever I go back to visit, because there’s a home vibe. The landscape, the warm weather, my family [gives off] a home feeling. But here is where my life is. I love it here, but there’s always that small part of me missing [Israel] that longs to go back.”