Peer Group engages more students than before; looks forward to the year 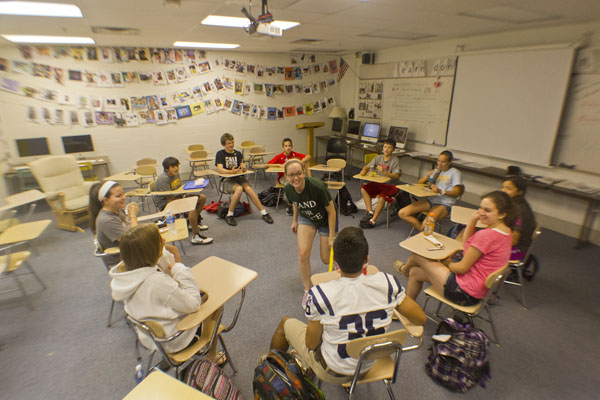 At the beginning of the year, freshmen are faced with a choice: whether or not to join Peer Group. While freshmen contemplate this decision, senior leaders recruit as many freshmen as possible, and teacher coordinators plan for the  future of South’s high school integration program.

According to John Klasen, Peer Group coordinator, the purpose of Peer Group is to help freshmen make a smooth transition into a new school setting.

“[Peer Group is] technically the only transition program we have at the high school,” Klasen said.

Senior Leader Alison Tye said the program gives freshmen the opportunity to learn from the seniors in a fun environment.

“At the beginning we do name games or competitive games,” Tye said. “Sometimes we do discussions about school and about making the right choices regarding drugs and alcohol.”

In addition to the activities, freshman Sarah Wojick said she enjoys Peer Group because it gives her a chance  to meet new people.

“Peer Group is a place where you can go to get away from your friends and talk with other people,” Wojick said.

According to freshman Sam Langenbach, most freshmen in fifth period lunch have chosen to participate in the program.

“The cafeteria is pretty much empty on [Peer Group] days,” Langenbach said.

Langenbach said she is happy to attend her Peer Group meetings. On the other hand, other freshmen were not so eager to sign up.

According to an Oracle-conducted survey, many freshmen choose not to sign up for various reasons.

“I  have choir, so I already have a half lunch,” freshman Michael Kirby said. “I wouldn’t have time.”

According to Tye, the process of recruiting freshman by pairing up with another leader and visiting the East Cafeteria was very successful this year. Tye claims there were so many freshmen signing up that they eventually had to turn some students away.

“Once one kid signed up the entire table would sign up,” Tye said.

“[Enrollment has been] really good, really high,” Meyer said. “Our groups are all between nine and 12 kids. Ten is our perfect [number], so we’re a little bit over, frankly. Ten used to be the cap, but the last few years, we’ve had such high interest we changed it to 12.”

Meyer has high hopes for the future of Peer Group. As South is switching to block scheduling next year, he hopes to be able to expand the program to have groups meet daily and during every period.

“We’ll have a 90-minute block,” Meyer said. “The first 45 minutes our seniors will plan and evaluate before and the next 45 minutes they’ll actually see the freshmen. In some ways it’ll be better because they’ll plan and then they’ll get to  carry their plan out right away.”