Students embrace their inner musician at Battle of the Bands 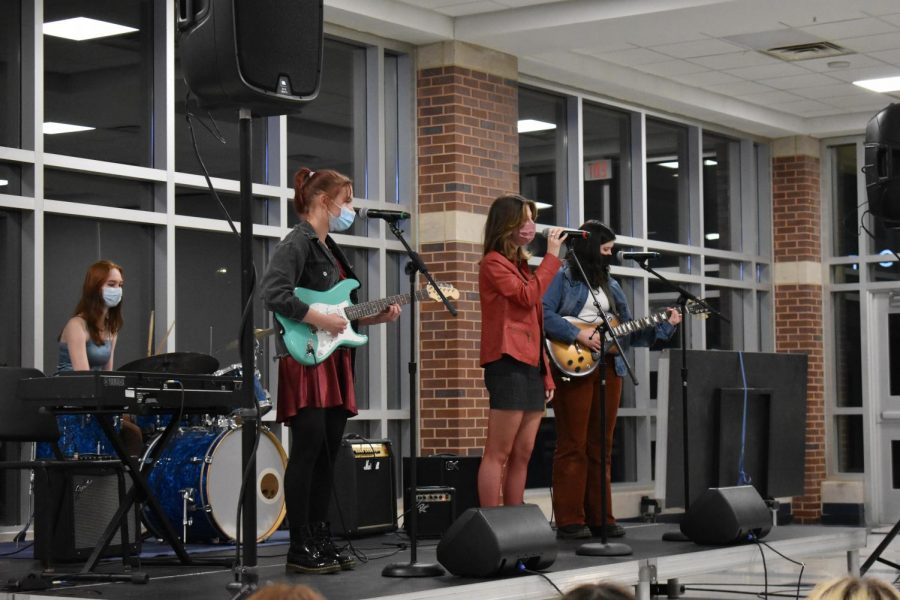 Cheers encourage the band members as they step onto the stage. The chatter dies into silence and suddenly, it is time. The long-awaited moment to finally showcase the endless hours of rehearsal and dedication to an expecting and excited audience had finally arrived.

South’s Battle of the Bands, held on Dec. 10 and sponsored by Interact Club, allows young musicians to perform live in front of their peers. While students compete for the sought-after trophy, all proceeds from ticket sales go to the Northfield Township Food Pantry. Above all, the night ended with all ticket sale contributions of $733 to a local charity.

Senior Matt Penne participated virtually last year and expects the live audience to create a better environment for the show. Penne and his two musical bands, Country Crusaders and Hook, had been rehearsing a number of different songs in preparation for the event, their anticipation rising as the show grew nearer.

“I am in two different bands called Country Crusaders and Hook, which [are] rock,” Penne said. “I play the drum set in [the rock] band and one of my friends plays guitar, the other plays bass; they trade off singing. I feel like [working together] varies a little bit. It’s exciting, but I always feel a little nervous because especially for drums, you have to keep a steady beat and keep everyone together.”

Senior Saanya Shah, co-director of Interact Club, believes Battle of the Bands is a great opportunity for bands to perform in front of a live audience in preparation for the Variety Show later in the year.

“Battle of the Bands is an event that Interact has been hosting for six or seven years,” Shah said. “It’s a chance for any band at GBS, whether they play with the school or not, to have a live performance and compete with each other. Voting takes place live at the event, so the winners are announced at the end. And the bands [have an] opportunity to get a gig in [before] the V-show.”

Junior Fiona Clements’ band, The Tofu Fighters, won first place in the competition. Clements formed the band earlier this year with juniors Sofia Oyarzún, Cali Wilkinson, and Avery Arnold, and is incredibly proud of how far the group has come, she explained.

“Not only did we work hard for months, but we had an incredible amount of fun doing it,” Clements said. “The music truly came to life when everyone [in the band] was together.”

Mark Gallagher, math teacher and sponsor of Interact Club, believes that an important aspect of the event is engaging with the community. Funds collected from ticket sales at the end of the event are used to give a helping hand to others in the area, he said.

“This [was] the first live Battle since Covid-19, but I [expected] to see a good turnout,” Gallagher said. “Based on all the talent walking the halls of Glenbrook South, especially music talent, [I knew] it could be a lot of fun.”