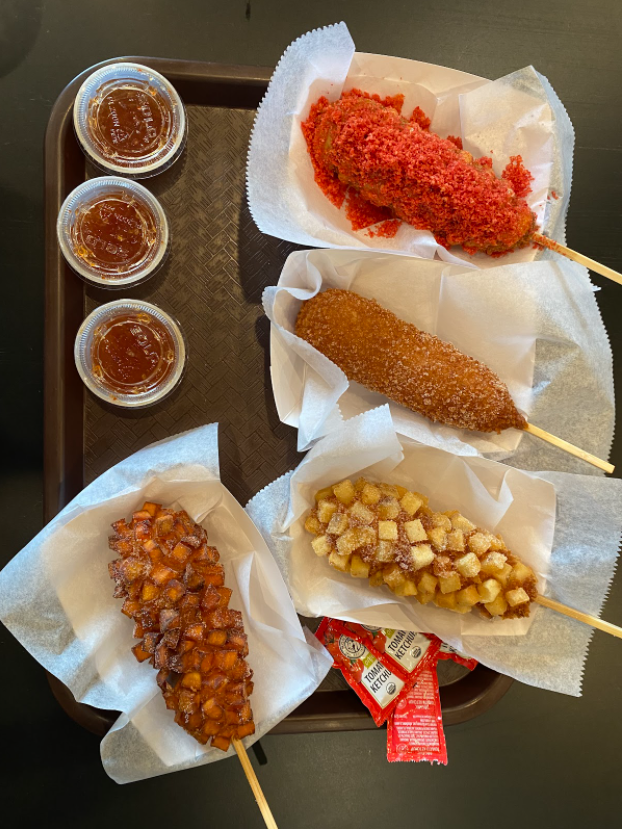 Eggsum Holycow is a new Glenview-based restaurant that specializes in Korean corn dogs. Korean corn dogs are filled with beef, sausage, mozzarella, or cheddar cheese, then coated in a sweet flour batter.

Customers are offered the choice of eight different corn dogs, two different cheese or sausage fillings, an array of sauces to top off with, and the option of a dusting of sugar, creating endless possibilities.

Out of all these unique choices I decided to try the four most popular corn dogs to review.

Based on the flavors of CHEETOS® Crunchy FLAMIN’ HOT®, this corndog is drizzled with a spicy sauce and CHEETOS® Crunchy FLAMIN’ HOT® dust. This corn dog had the most flavor out of all, but the strongly flavored topping made it taste artificial and I wish it had more of a kick. Even though it needed more spice, I was grateful that it was already paired with a sauce and you didn’t need to ask for one. This was definitely my favorite corn dog based on the flavor and the fun red presentation.

This was the simplest corn dog, but it had great texture like almost all of the corn dogs. It had an insanely crispy thin layer of coating which reminded me of a churro or funnel cake because of the crisp greasy outside. The melted cheese inside has a cheese pull that is picture worthy, but it didn’t hold any flavor. Although, the sugar coating added a nice sweet flavor that was the only taste. The mix of mozzarella and cheddar didn’t have a difference in flavor and it seemingly tasted like one cheese instead of two, which was disappointing since it added no change.

The restaurant could have used a more sharp cheddar to distinguish the taste from the two cheeses and it would have made choosing that filling worth it. The only thing that really added a kick was the sweet chili sauce, but I feel that it didn’t combine well since it was sweet and sour mixing with a creamy cheese and it was just unusual.

Fried Potato had a similar taste to the classic since they were both simplistic. The potatoes added another layer of crunch, but I felt the dough was much thicker and denser compared to the light thin layer from before. Next time, I would dip this in ketchup and treat it like fries. I think the lack of sauce pairing recommendations confused me and led me not to appreciate the food as much as I could’ve because of how boring it was.

This corn dog was the same style as the fried potato, but the pieces are yams, so they have less of a crispy texture. Since the yams were softer, the thicker coating created less of that pleasing crunch. Even though the yam-yam lacks slightly in texture compared to the two others, it has more flavor because of its sweetness. Similar to the rest, a recommended sauce would have given this corndog the oomph it needed.