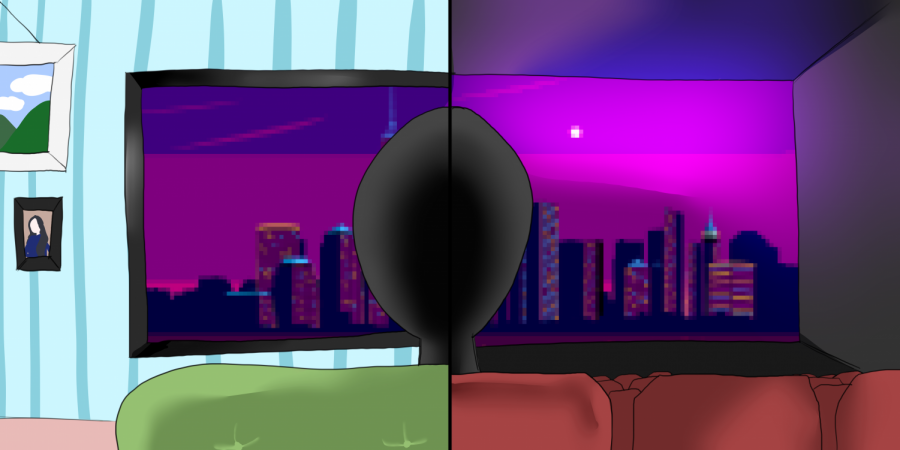 John Cowlin, English and film studies teacher, emphasized the importance of going to movie theaters, and how that experience can completely change one’s thoughts on a film, creating a completely different and unique human connection.

“Movies contain really special, magical, human moments in them,” Cowlin said. “And without the ability to share that with people, you’re just watching everything in a vacuum…  [Streaming movies] lessens and cheapens everything.”

However, junior Owen Almburg thinks you can get the same experience streaming at home that you would in a theater.

“I do kind of miss the interaction of movie theaters, because it’s fun being there with your friends,” Almburg said. “But you can do the same stuff at someone’s house while streaming something.”

While Almburg thinks the experience of watching a movie at home and going to a theater is similar, Cowlin disagrees.

“Streaming is [when] you’re by yourself on a three inch screen, watching it in pieces, while other people do other things in the room,” Cowlin said. “It’s not even watching the movie anymore. It’s a completely different experience. And there’s no doubt that something is lost in the transition.”

“I’ve always liked streaming movies because it’s really convenient,” Almburg said. “If you just get in the mood to watch a movie, you can just flip on your phone or your computer and start watching.”

The closing of theaters due to Covid-19 allowed movies to go straight to streaming services. This “direct-to-streaming” shift caused a boom in day-one premieres for various services. Junior Greyson Aralis used to find attending movie premieres before a film went to streaming exciting, he said.

“I think it’s cool to see a movie before it comes out on the streaming apps, and [to have] that experience in a movie theater,” Aralis said.

Almburg shared the same sentimentality as Aralis, recalling the unique experience of seeing the premiere of a film and what that brought to the event of going to movie theaters.

“There was so much hype to be the first one to go see [a movie] at the theater for the weekend of release, and people [were] just super excited to go to theaters to watch it,” Almburg stated. “Now that [movies are] releasing right on streaming services, it kind of takes away the whole point of going to a theater.”

Covid-19 may have taken away the ability to go to a movie theater for a brief period, but with their recent re-opening, time will tell how much of a turn society has taken away from theaters and if streaming has become the more popular way to watch movies, Cowlin explained.