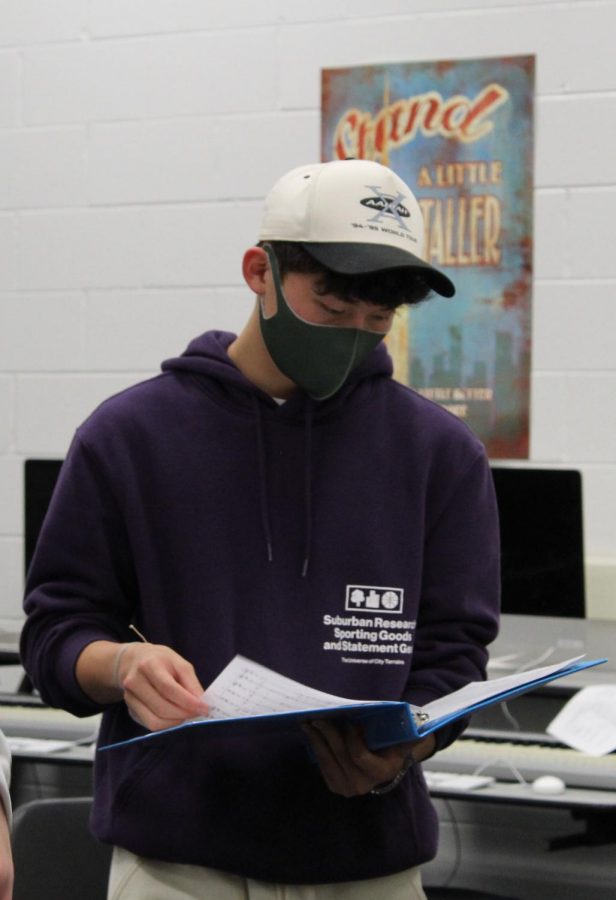 Cheerful Chung: Flipping through his binder of songs, senior Noah Chung practices with the a capella group Nine. A recent transfer to South, Chung is grateful to be involved in choir.

Roughly 30 minutes before pressing submit on his virtual audition for Nine, South’s boys a capella group, senior Noah Chung began practicing. He never expected to make the cut, as singing had always been nothing more than a hobby for him.

Chung, who recently transferred to South from Maine East High School, decided to audition for the group after hearing about it from a friend. He was excited about the possibility of involvement in the group, but didn’t have his hopes up as he had never sung publicly.

“[The audition] was very nerve-wracking because I don’t usually sing in front of people,” Chung said. “I just sing on my own.”

Chung was asked to come in for a callback, at which he was given the opportunity to showcase his talents to the group’s other prospective members and all of the teachers involved.

“I thought [the other students] were all a little better than me,” Chung said. “Somehow I ended up getting in. That was pretty shocking.”

Although Chung has been singing for many years, he is different from his peers in Nine because of his inability to read sheet music, as he has always solely relied on learning new songs by ear. Drew Curry, Nine director, has been supplying students with audio recordings of their songs on the piano, which has been helping Chung navigate the material.

“He has a really solid ear and for a student like that who can still pick things up quickly, that’s just as effective [as being able to read sheet music],” Curry said.

Chung’s lack of formal choir experience does not worry Curry, who often observes some of the other boys in the group helping each other follow along in moments of confusion. He described the brotherhood of Nine, emphasizing its extremely supportive and caring nature.

“We have this community built where they’re able to work off of one another,” Curry said. “It’s a very collaborative environment; the guys have a really strong bond.”

In rehearsals, Chung often turns to junior Anthony Tu for assistance, as the two sing the same vocal part, bass two, and therefore sing the same sections in each song.

“[Learning new songs] is a challenging process,” Tu said. “I just guide him [to] where we are.”

Chung is appreciative of all of the support he’s been given by everyone involved in Nine, and he’s anticipating a great school year as part of the group.

“I’m just hoping to have a fun time and [improve] my singing skills,” Chung said.