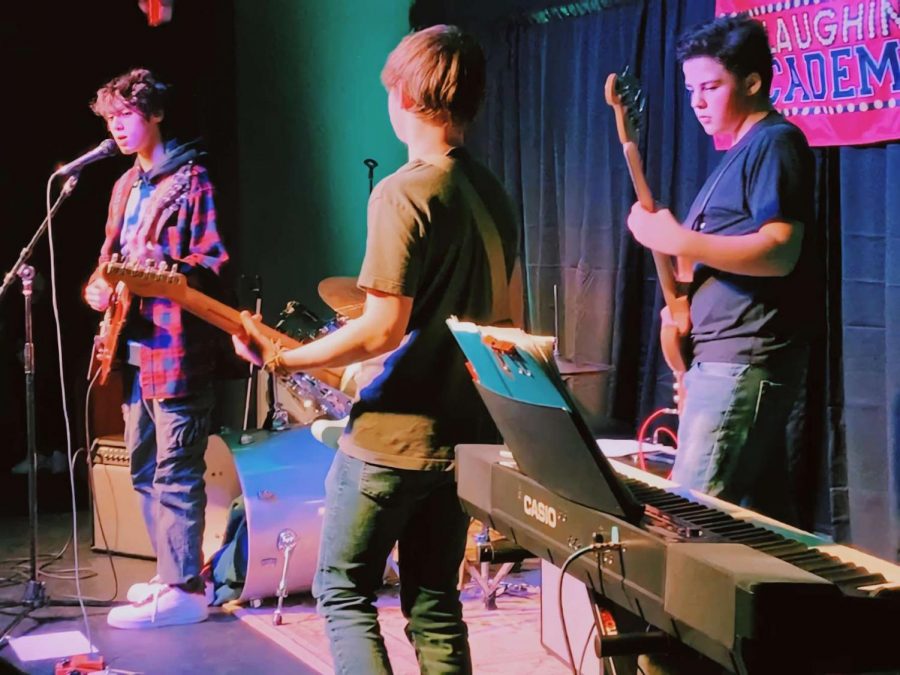 Guitar greatness: Rocking out at the Laughing Academy, a local improv school, sophomores Henry Najem, Terry Treger and Johnny Rolfes (left to right) play during the summer of 2020. More recently, their band, Candy for Breakfast, won Battle of the Bands, a competition at South between various bands where students vote for a winner. Photo courtesy of Johnny Rolfes.

As the bright spotlights radiated warmth onto their faces, sophomores Henry Najem, Terry Treger and Johnny Rolfes, members of the band Candy for Breakfast, took the stage to perform in the 2020 Variety Show. Despite his nerves, this was Rolfes’s favorite performance.

“My favorite memory from the band is performing for the Variety Show last year,” Rolfes said. “It was definitely the largest crowd we’ve had and even though we were a little bit nervous, it was a lot of fun.”

More recently, Candy for Breakfast won this year’s Battle of the Bands, a competition supervised by Mark Maranto, assistant principal of student activities, where various bands at South perform and students vote for their favorite band. Maranto was impressed with their success and professional attitudes when he worked with them and enjoyed listening to them play.

“I would characterize them as an indie band with a really cool vibe to their music and lyrics,” Maranto said. “From the outside, I’m pretty impressed with how polished of a band they are for being sophomores in high school.”

Their “indie vibe” music can be played on Apple Music, Spotify, Youtube or any other streaming services. Najem, the leader of the band, explained their name’s origin story.

“Terry’s friend in fifth grade said that it looked like he had candy for breakfast today and he said, ‘Oh, that should be the name of our band,’ and then it just stuck.” Najem said.

While they started the band in sixth grade, Najem said they began recording songs in eighth grade. When creating a song, Rolfes explained that the band works together to create a cohesive final product.

“Usually one person comes up with the skeleton of the song, maybe having the basic chord progression and some lyrics,” Rolfes said. “From there, everyone will make up their own parts to spice up the song a little bit. Eventually, it starts to come together and sound pretty cool.”

Rolfes enjoys the process of writing new music because it provides him with a creative outlet.

“My favorite part of being in the band is being able to express myself through writing our own music and being able to play whatever we want,” Rolfes said. “The freedom of the band makes it very enjoyable.”

The band members are versatile musicians and often rotate what instruments they play depending on the song. Najem sings while playing the guitar and Treger and Rolfes sing while playing bass. While Najem is unsure of how long the band will be together, he explained their passion for music will never fade.

Makena Pocklington and Niki Lipscomb contributed to this story.