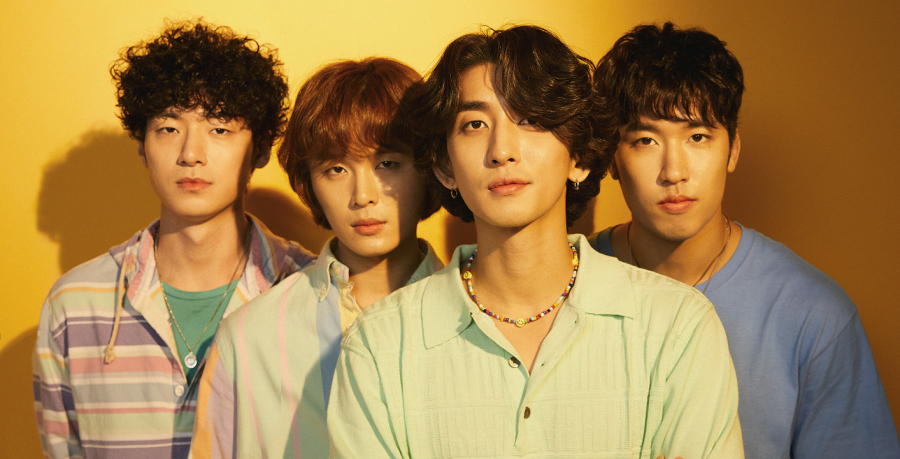 Jovial Jannabi: Posing for their band portrait, the band derived their name from the pure Korean word meaning “monkey,” the Chinese Zodiac animal that the bandmates share in common with each other. Bassist Kyung-joon Jang, guitarist Do-hyung Kim, vocalist Jung-Hoon Choi and drummer Kyul Yoon (from left to right) have been bandmates since 2013.

A whiff of sweet, tooth-aching nostalgia, the recalling of a hazy childhood memory beneath the warmth of the bed covers in the midst of a particularly cold, dark, emotional night: this is the essence of Korean indie band Jannabi’s new five-track EP, JANNABI’s Small Pieces I, released on Nov. 6.

Though many have most likely heard of the K-pop genre, the K-indie genre is one that has not yet reached the masses. However, bands like Hyukoh, Kiha & the Faces and artists like Sunwoojunga have been enriching loyal listeners with their beautiful musicianship for years.

Among these artists, Jannabi has been a successful band in the Korean indie scene. After spending their years busking in the streets, they began to receive more recognition for their unique melodies, their retro style and their beautiful songwriting. The band currently consists of two members, guitarist Do-hyung Kim and vocalist Jung-hoon Choi. The other two, their drummer and their bassist, are currently on leave for mandatory military service. Despite this, Kim and Choi released this EP, a collection of songs they had written and performed multiple times in concerts, but never officially recorded.

The opening track, “A thought on an autumn night”, establishes the theme and mood for the entire EP. It’s a reflection on a bygone era of simplicity and fond memories that’ll never come again, but likewise, are never forgotten. Choi expresses his yearning to keep these memories through his songs: “When it comes night I’ll gather up what I miss the most / craft these songs to sing.”

The poetic lyrics reveal a twinge of a solemn tone, but the melody is uplifting, as if to reassure listeners that it’s okay to feel this longing, to want to never let go of these memories. Even the instrumentation— the twinkling flutes, the gentle acoustic guitar in the beginning, the tender piano —amounts to a light, hopeful, yet mildly somber tone that perfectly captures the experience of longing for a simpler time.

Indeed, the aspect that I find most loveable about this EP is the fact that Choi and Kim’s composition and songwriting show a deep understanding of the concept of nostalgia. It is a wonderfully contradictory emotion; it can make us feel warm and fuzzy in remembrance, but often leaves us feeling empty and yearning. The EP captures these emotions brilliantly.

The second track, “Step”, is lighthearted, louder and more declarative than the first and more playful and childlike. What I love most about this track is that you don’t need to understand Korean to feel the joy with which Choi sings this song. You can feel the smile in his heart as he sings.

Yet the next song, “Sweet memories”, scales back on this child-like innocence. It’s more tender, more loving, more emotional. The song feels almost like Choi’s whisper goodbye to a former lover. On his Instagram account, Choi shared a line of insight regarding this track: “To miss someone feels like an exhilaration that flows backwards.”

Indeed, we often take for granted the memories and moments that we shared with those we love. Looking back, the emotions we should have experienced then flow back to us in the now, feeding our yearning and exhilaration.

As I approached the end of the EP, I felt that Jannabi had taken me on a journey of self-reflection. The then minor details in my childhood, the emotions, the sensations of then, meant so much to me now. The insignificant events, habits and people of then, now seem like an innocent, playful life full of fun adventures.

Jannabi’s new EP is a fresh sound, a sound that is bound not only to give listeners’ ears a break from the bombastic nature of mainstream K-Pop, but also offer a sound that provokes their hearts to feel a warmth that I believe all listeners will benefit from this winter season.