Hands up in the air: SEVENTEEN celebrates their fans 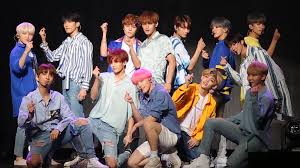 hth mini-album Heng:garae this past June. Henggarae is a Korean word that translates to “tossing someone up in the air in celebration.” SEVENTEEN described this as an album given to their fans as a gift and as an avid listener of SEVENTEEN’s music, this gift did not leave me disappointed.

SEVENTEEN is a self-producing band, meaning they write, compose and choreograph most of their songs. They are focused on growing in both their sound and overall group dynamic as they continue to release new music, which is why SEVENTEEN has a vast variety in their discography. With this in mind, Heng:garae is definitely an album that reminds me the most of SEVENTEEN’s roots. Similar to the sound they had in their early days, but with obvious growth and the maturity they always strive for.

“Fearless” opens the album with its hard beat and chant-like vocals. At first, the intro immediately reminded me of “Believer”, an Imagine Dragons song. The SEVENTEEN members talk about being scared in the past, but eventually overcoming those fears and having to take a step further. “Fearless” is the second part of another SEVENTEEN song called “Fear”, a track in their previous album, An Ode. I really liked that the way these two songs connected is through the use of the opening lyrics of “Fear” in the sequel’s bridge.

“My My” and “Left & Right’’ are the main title tracks in the album giving off a happy and playful beat. “My My” talks about a positive journey towards one’s goal, while “Left & Right” reminds us to strive towards our goals head-on. Though both are pretty good songs with great messages, they do not compare to the other title tracks SEVENTEEN has released in the past. “Left & Right” is usually a favorite among people who listen to K-pop, but to me, it sounds like a typical summer song that every K-pop boy band has released.

“Kidult” is, without a doubt, my favorite song on the album and one of the best b-sides (songs that are not the main title album) within SEVENTEEN’s entire discography. It is mellow but also upbeat at the swame time.

“Kidult” talks about ultimately wanting to break down and cry like a child during hard times, but also brushing through it outwardly with a smile in order to move on. Main vocalists Seungkwan and DK truly shine in this song, as their falsettos and high notes take you out of this world. This song is meant to comfort listeners, which is exactly what it did to me. Because some of the SEVENTEEN members took part in writing the lyrics, I could really feel the message they were trying to convey to their fans.

“Together” is also a song that I enjoyed a lot, and to me, it is second to “Kidult” in the album. The song’s main vibe reminds me of “Run To You”, a song from their Director’s Cut EP. While “Together” was more like a headbanger, “I Wish” flooded me with nostalgia, almost like the songs I used to listen to on children’s shows as a kid. The fact that the rappers of the band chose to sing made the sound more mellow, happy and easy to listen to.

The Heng:garae era proves SEVENTEEN’s growth as artists and people through the songs and performances. This EP proved that music has no barriers, despite the language, because I could feel the love and comfort SEVENTEEN tried to give to their fans. Heng:garae broke records for SEVENTEEN and has gained them a much larger following. This does not surprise me as it demonstrated, as their other albums do, SEVENTEEN’s artistry and capability.