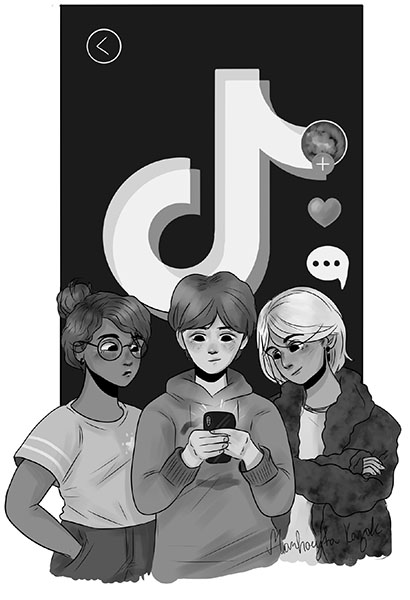 Take a short stroll down the halls during block three at any given time at South and there are a few things that will always be there: tables fundraising in the middle of the hallway, Frank Stankowitz talking to students in the hall, and students making Tik Toks, a social media platform used to create comedic, entertaining short videos. This week, the videos were about raiding Area 51 to kidnap aliens, but last week they were about VSCO girls. One Tik Tok creator,  junior Emily Chung, actively participates in these trends.

Chung stated that Tik Tok has become really popular in the last few years because it is an improved, more appealing version of Musical.ly, another social media platform used to create short videos that featured almost exclusively choreography lip syncing to songs. Chung said she likes Tik Tok better than its older counterpart because it is more comedy based, like Vine, another social media platform used to share videos that very was popular before its removal from the app stores. Junior Devon Kelly agreed that the comedy aspect of Tik Tok is the reason the app has recently attracted so many followers.

“I feel like there hasn’t been a good comedy outlet for people since Vine died, and I think it’s like the new Vine and people are treating it like that,” Kelly said. “There’s just so much variety on the app: you can basically post anything on it, and it’s a lot easier to get popular.”

Too many people download Tik Tok with the goal of becoming famous, according to freshman Charlie Steil. Steil said that, instead, videos should be made solely for fun, and if Tik Tok fame comes as a result, that’s just a bonus to the creativity one puts in.

“I don’t feel pressure to be active [on Tik Tok] because I just think of it as a fun thing to do,” Steil said.

Junior Mitchell Mortensen said the potential of becoming Tik Tok famous was not the reason why he downloaded the app in the first place. He stated his reasoning was more of a desire for another form of entertainment he could share with his friends as a funny joke.

“I just thought it was funny,” Mortensen said. “Everyone knew about Musical.ly and made fun of how stupid [Tik Tok] was, and I just wanted to be a part of the joke, so I downloaded it.”

Chung explained her first viral video was of her teasing girls who wear Converse to prom. This teasing culture on Tik Tok is quite the common occurrence, according to Kelly, as her first viral Tik Tok was a video of her teasing the incoming class of 2023. However, she explained that she jokes lightheartedly and that no offense is to be taken. According to Chung, she never expected to have one viral video, much less several videos, all of which have allowed her to surpass 40,000 followers. Kelly, who has over 11,000 followers, was also surprised when her first video went viral.

“It was weird [seeing my video] get that popular,” Kelly said. “I’ve had videos get popular but not that popular before, I think it had 200,000 likes which was crazy.”

Kelly said that she finds it strange when people she does not know comment on her Tik Tok videos. She thinks it’s weird when people outside of the Internet know about her being Tik Tok famous, however, she admits she gets mostly positive feedback on even her videos poking fun at people or trends, so she’s proud of the following she has gained.

“Two girls from my camp were like ‘I recognize you from somewhere’ and they found out I had a Tik Tok and there were like ‘Oh my god I follow you on Tik Tok,’” Kelly said. “[It was] awkward because I don’t like talking about [Tik Tok] in real life because it’s weird.”

Kelly does not enjoy the prospect of bringing Tik Tok into her everyday life and neither does Mortensen, who finds entertainment in being recognized, which usually only happens very locally and at school.

“It’s funny when I walk around the school and people are like, ‘Oh my god, that’s the Tik Tok guy,’” Mortensen said. “Last year a of lot people would call me by my username and it was really weird. I like [the flattery], but it’s embarrassing.”

Chung is proud of the progress she’s made and the followers she’s gained recently. She stated that despite her success, she does not think fame on Tik Tok is something worth bragging about and she is not used to being noticed, much less for her fame on the app but is still satisfied with her newfound fame.

“I was super happy because I never thought of myself as a funny person, but it was really cool seeing how other people thought I was,” Chung said.

Kelly agreed in not feeling pressured to be active on the app by her following or fame, but she continues to post regularly for her fans.

“It’s not like I’m on a schedule or anything because it isn’t that serious, but I would say that [I post videos on Tik Tok about] once everyday,” Kelly said. “I do get kinda stressed out if I don’t post [anything] for a while in the back of my head [though].”

Steil said he doesn’t feel any pressure to post because he just thinks of Tik Tok as a fun pastime despite his following of over 30,000. He stated his frequent activity on the app was due to its addictiveness and not due to obligation, but now rarely posts on the app.

“[Tik Tok] is a fun thing to do, but it’s not the end of the world if you don’t end up famous,” Steil said. “It’s fun to have people come up to you and be like ‘Oh my god you’re Tik Tok famous, but it doesn’t matter that much.”