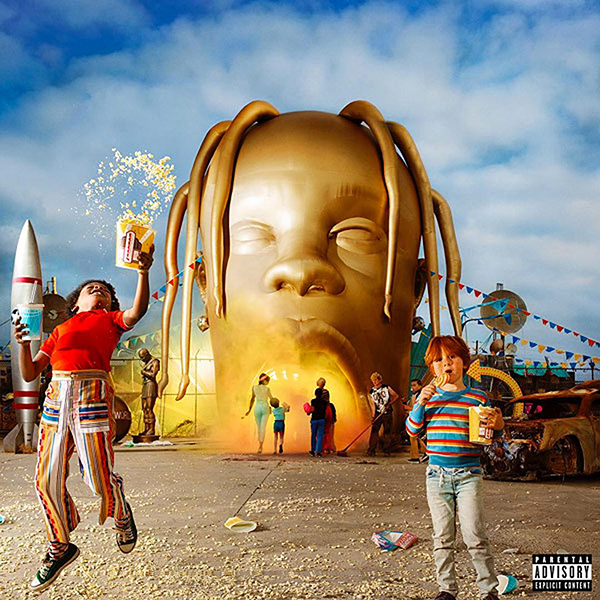 Travis Scott burst on the rap scene in 2012 after dropping out of school and collaborating with Kanye West’s record label, appearing on their 2012 Summer Mixtape. His fame only grew from then on, as he was granted a spot in XXL Magazine’s Freshman Class of 2013 alongside Logic and Joey Bada$$. He gained a reputation of hard trap combined with melodic singing through his first two studio albums, Rodeo and Birds in the Trap Sing McKnight, which peaked at number three and number one on the Billboard Top 200, respectively.

There were big expectations for Astroworld, and the album did not disappoint, released on Aug. 3 and debuting at number one on the Billboard Top 200. Although he obviously earned this spot, Scott has recently been criticized by Nicki Minaj, who tweeted, “Travis sold 200K in his first week of clothes alone. I spoke to him last night & he said he’s been selling clothes before the music. Billboard says they’ll change the rules cuz of this, so it should be changed now!” Minaj is mad because he’s tying his clothing sales with his record sales to propel him to the number-one spot, but that’s just good marketing.

Right out of the gate, Scott hits us with one of the best songs of the album, “STARGAZING”. This song represents the two different sides to the album: melodic singing and hard trap. The catchy beat combined with Scott’s signature auto-tune singing pulls you in. Then, the beat switch makes you never want to stop listening. This track is an instant classic.

“SICKO MODE” is widely considered the best song on the album as it flew to number one on the Billboard Hot 100. A Tay Keith-produced banger, this track features the hard side of Scott. One thing that is consistent throughout the album is the switching of beats in the middle of songs, and “SICKO MODE” is no exception, with two beat switches of its own. Throughout the track, Travis also references Kid Cudi, the Notorious B.I.G and, of course, Kylie Jenner.

My personal favorite song on the album is “WAKE UP”, an emotional song featuring The Weeknd. Maybe I’m biased because I love The Weeknd, but this song tugs at the heartstrings. Anybody going through anything will feel this song immediately, solely based on the emotional passion.

Scott’s slew of features help him set a tone in each of his songs: Frank Ocean sets a smooth, gentle vibe in “Carousel”, while Drake’s collab on Sicko Mode transforms it into a banger. Other features include Migos, Juice WRLD, Murda Beatz, Swae Lee, Sheck Wes, 21 Savage, The Weeknd, Gunna and NAV.

I rate this album four out of five stars because, although I loved it, I was slightly disappointed with it. I love the variety of sounds Scott displays as well as the loaded features. However, there is one thing that holds him back: overproduction. The best Scott songs are ones with simple, pure beats coupled with Scott’s masterful musicality.

“WAKE UP” is one of the few songs on Astroworld that stays true to this ideal. I’m accustomed to the certified bangers I saw him perform at Lolla this year, such as “Through the Late Night”, “Goosebumps” and “Pick Up the Phone”, and none of the songs in Astroworld gave me the same feeling these tracks did.

There is not a single category in which you could say that Astroworld is better than Birds in the Trap sing McKnight, and one could argue that it does not surpass Rodeo. That is not to say it is a bad album or that I don’t love it; his previous projects are just extremely hard to beat.