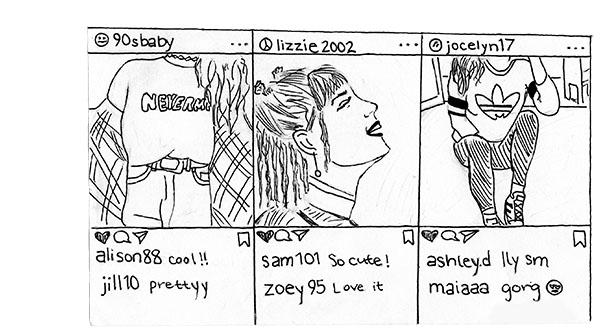 Sophomore George Dornan has known Paul Pogba as his favorite world-class soccer player for many years. However, only recently did he also notice Pogba’s influence in the world of fashion through Pogba’s Instagram. Launching his own clothing line in partnership with Adidas, Pogba shows off his high-end streetwear. The swag he exudes in this clothing has become something Dornan hopes to emulate, he says. Fashion is everywhere, but only with social media can Dornan and many others find someone to uncover their passion for fashion.

Junior Erin Nukk says she has participated in several mainstream fashion trends in the past year. Some of these styles include polka dots, fun hems on the bottom of jeans, and platform sandals. Similarly sophomore Ella Durchin has joined the belt trend, which adds a fun twist to any boring outfit, she says.

“Belts have come back in style recently and are so fun to style up with a plain outfit,” Durchin said. “Most of the belts I buy are thick so they add more of a pop to my outfits.”

“The oversized T-shirt and sweatshirt trend is still in business and will probably last a long time since it is a super easy, lazy look,” Durchin said.

Being involved in fashion and current trends is awesome, says Nukk, because she loves how clothing can completely change based on your mood. There will be days, Nukk explains, when she lays around in a pair of joggers and a sweatshirt and others where she puts on heels and a fancy dress.

“I’ve always had a love for fashion and the way it makes me feel confident in myself,” Nukk said. “I value the idea that what you wear says a lot about you, and I think fashion is a great way to express someone’s inner creativity and individuality.”

Not only does senior Megan Brady use Instagram everyday, but she even has her own fashion blog (@megsfashion.blog), where she posts the latest fashion trends and styles. According to Brady, she likes to mix and match different pieces to create the ultimate look.

“Social media has been an amazing tool for fashion and has gained more popularity than ever before,” Brady said. “People are able to share and post in a second and the latest trends and fashion advice is able to be reached all over the globe.”

One way to become a trendsetter is to be unique in the way you dress and not care as much about what other people think, according to junior Katie Itaya. She says that one icon who has demonstrated this for her is Kendall Jenner.

“I’m not really a big Kardashian fan, but I think Kendall Jenner has an awesome sense of style and she’s always wearing unique things,” Itaya said. “She never really cares what everyone else is wearing she just wears what she thinks is cool.”

Green says that, with the rise of Instagram, people see the crazy things other people wear and are thus able to wear their own styles confidently. She says she’s never cared as much about what other people think, which makes it easier to wear certain things. Nukk adds onto this idea, saying that  if you appear as if you are sure of yourself and your goals that will appeal to other people.

“In middle school, people were so judgmental, so I would wear black leggings almost everyday because that is what other girls wore,” Nukk said. “Now, since arriving at GBS, I think people are more supportive of each other and what people take interest in, which gives me freedom to wear what I want and to express myself through my clothing.”

Just being surrounded by people who dress nicely and figuring out who one is from others is inspiring says Durchin.

“I love the fact that you can express yourself through clothing and feel good while doing it,” Durchin said.

Similarly, Dornan finds that people may see things other people are wearing and pick up on the ones they like, further developing the trend.

“If you dress nicer, it boosts your confidence,” Dornan said. “Not in a cocky way, but it just makes you feel better about yourself.”

“Social media is important to me because I like being able to see a little sneak peek of what other people are dressing like,”   Durchin said.

Itaya believes that  without social media, fashion trends would spread a lot slower and people wouldn’t be able to get inspiration from celebrities who live far away. Kelly agrees that social media is necessary to keep up with fashion trends all around the world.

“Social media is a big factor in how [people] find new trends and develop a certain sense of style,” Kelly said. “If social media wasn’t a factor, people would only be influenced by what they see in person.”