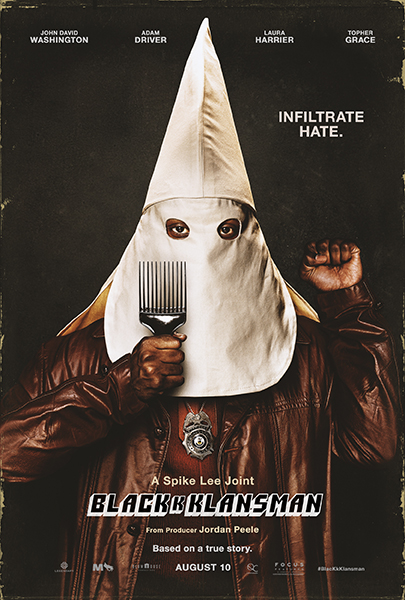 Never before have I experienced such an overwhelmingly suffocating silence the likes of which followed Spike Lee’s BlacKkKlansman. The harsh truths revealed in this earth-shattering film left the theater completely still, only interrupted by the sniffles and sobs of nearly every member of the audience.

Lee not only tells the true story of Ron Stallworth (John David Washington)—the first African-American detective in the Colorado Springs Police Department (CSPD)—and his undercover case to infiltrate the Ku Klux Klan, but he also tells the story of modern-day oppressive America through a historical lens composed of an intense plot, character development, featured media, cinematography elements and an outstanding soundtrack.

Stallworth is our unlikely hero, and Lee humanizes him by including scenes in which Stallworth uses his real name when speaking with a Klan leader, clumsily flirts, and karate-chops the air after speaking with a racist co-worker. He strays from the norms of a classic hero in that he is not particularly smooth nor gallant, but he is dedicated and eager. Lee creates Stallworth’s persona to reflect some aspect of each audience member, making him all the more raw, relatable and radical.

One of Lee’s most admirable accomplishments within the film is his ability to focus on racism while maintaining social accuracy and avoiding the exclusion of other prejudices, specifically antisemitism. While Stallworth carries on his persona of “white Ron Stallworth” over the telephone, his Jewish co-worker Flip Zimmerman (Adam Driver), acts as the physical version of Ron, attending Klan meetings and meeting other members. Senior Hannah Wittenstein found Zimmerman to be an influential character within the film because of his direct and nearly constant exposure to antisemitic rhetoric and actions among the Klansman.

“I’m also Jewish, so that was an interesting part to see because I sometimes forget that [antisemitism] was a large part of the time period,” Wittenstein said. “It was stuff I’d heard about, [but] it felt more real than [in] other movies with similar storylines, which made it especially hard to watch.”

“I have this struggle sometimes because I live in the suburbs, and when I go hang out with my cousins they always joke about how I’m the ‘white girl’ of the family,” Carr said.  “It hurts me a little bit because it makes me feel less black in some way, but I realize that it’s not true and I am 100 percent who I am, I just talk different.”

Furthermore, Lee incorporates strategically placed innuendos to transport the movie into a present-day premise. Several mantras with very timely connotations are included within the film to emphasize that the racial oppressions during the ‘70s and early post-Civil War America are far from outgrown. Characters mutter things like “we need to make America great again” or put “America first.” As if weaving these phrases in the film is not obvious enough, Lee incorporates footage from the Charlottesville protests from August 2017 to criticize the state of our nation.

The Charlottesville footage is the most breathtaking scene in the movie. All the plot advancement, character development and hidden innuendos build up to this footage which carries one purpose: to alert the audience that nothing has changed between 1970s America and today. Lee continues the main theme of the film’s soundtrack to drag the scene to the same level as the rest of the movie. He includes David Duke’s speech at Charlottesville, in which Duke directly praises Donald Trump’s campaign, explaining that they “voted for Donald Trump because he said he’s going to take our country back.”

Duke’s statement alludes back to warnings made earlier in the movie about politicizing white supremacist ideals, and it is like a slap in the face that begs the audience to wake up and acknowledge the revolting nature of the country. The clip is followed by shaky footage of protesters fighting, plowing a car through crowds of people and shrieking racial slurs. The Charlottesville footage brought each audience member right back into that moment to create a dead silent theater that was occasionally interrupted by suppressed cries.

BlacKkKlansman is a difficult film to watch. It has its jokes, loveable characters and intense plotline; however, the film truly aims to drag the audience in and plea for societal change with its underlying tones and connection to the present day. The audience noticeably quakes with terror and shock in the final scene. It is devastating, it is raw, and it is an account of modern-day oppressive America through a historical lens. It is a movie that everyone should see in order to understand the nature of our nation and the risk the current political climate creates.