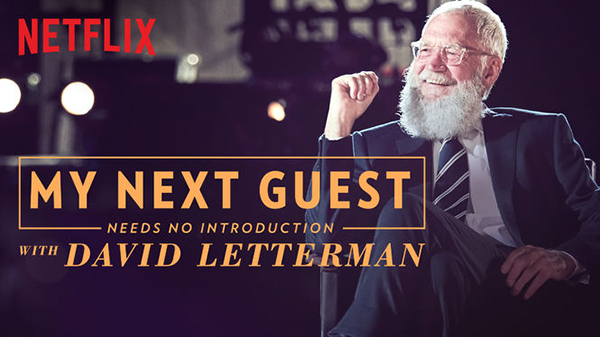 GLEAMING GUESTS: From left to right: Barack Obama, George Clooney, Malala, Jay-Z and Tina Fey are guests who have been featured on My Next Guest Needs No Introduction. The show aired on Netflix in January 2018 and is hosted by comedian David Letterman.

I was a tad young during the reign of David Letterman on late-night television. I vaguely recall his last episode, but the majority of my late-night experience has been shaped by the Jimmys and Stephen Colbert, who replaced Letterman. However, my interest in Letterman increased exponentially in January of this year. That was when the first episode of his new show, My Next Guest Needs No Introduction, aired on Netflix.

Letterman started off with a bang, holding nothing back. His first guest: former President Barack Obama. It was so refreshing to listen to Obama respectfully and eloquently respond to each of Letterman’s inquiries. The two of them discussed everything from Obama’s childhood to his thought on the current political climate with Obama admitting, “One of the biggest challenges we have to our democracy is the degree to which we do not share a common baseline of facts.”

However, despite the serious content, none of these episodes seem as if they are interviews but rather conversations between two old friends. As someone interested in journalism, I find it almost as interesting to observe Letterman as his interviewees and their responses. Each episode lasts an hour and not a single minute is wasted on trivial, introductory questions.

Unfortunately, I found the second guest in this series, George Clooney, to fall short in comparison to the other guests. It may have been due in part to the high bar set by Obama in the previous episode, but Clooney did not seem to shine. While his life story was interesting, I would have found it far more interesting to hear his wife, Amal, interviewed.

To be fair, I have never been a close follower of Clooney, but I imagine if you were a fan of him in ER you would enjoy the interview much more than I did. However, fear not, for up next? Malala.

“You Know, She Has a Nobel Peace Prize.” I found this episode to be aptly named. While I believe we have all heard the story of the young Pakistani activist, after listening to her interview I realized my knowledge had only skimmed the surface of her incredibly complex and, quite frankly, astounding story. One of my favorite comments of hers is regarding women’s education. I find it applicable to many of the difficult situations we find ourselves facing today, “We just need an ambition and an intention. What to do is then easy.”

As I listened to her recount her story and share her beliefs, I did not find myself depressed or feeling degraded by listening to a girl, only three years older than me, who had already overcome and accomplished so much. Instead, it was inspiring and gave me hope that maybe one day I could have a fraction of the passion she so clearly has for education.

Letterman continues on to interview Jay-Z and Tina Fey, both of whom were inspiring and engaging to watch. In late May, Letterman plans to release his interview with Howard Stern, which, having heard a couple of his radio broadcasts, should be an entertaining interview, to say the least. You don’t have to be a reporter to enjoy this show, nor do you need to know everyone who has been invited on it. Just watch, and I promise you’ll walk away with some new insights.