Music Theory caters to all students, allows for musical exploration 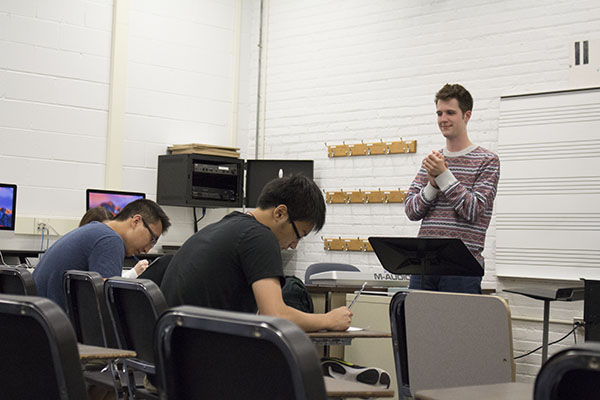 RHYTHMIC RITUAL: Clapping his hands, Robert Shellard, AP Music Theory teacher, warms up his AP Music Theory class with an exercise where the class is prompted to write down whatever melody or rhythm Shellard plays. This is one skill of many that was present on the students’ AP tests at the end of the year.

The bell rings. Robert Shellard, AP Music Theory teacher, sits either at the piano, playing a melody, or at the front of the classroom, clapping a rhythm. Shellard repeats this sequence four times while the AP students write the visual representation of the music. This is an activity that begins each AP Music Theory class, something that strengthens the students’ aural skills and was tested on the AP test at the end of the year. However, for many students, their Music Theory careers started long before this point.

According to Andrew Toniolo, Intro to Music Theory teacher, the system of music theory classes available at South work similarly to English classes, where one may learn the literary devices or parts of speech in a Language Arts class and then transfer those skills into their English Composition classes where they will begin producing advanced pieces of writing. Toniolo explains that beginning Music Theory classes teach a more definition-based curriculum, while the higher-level courses give students opportunities to string those concepts together and compose music.

“I like to explain [Music Theory] as the automotives of music,” Toniolo said. “[You can] equate music performance, whether it’s singing or playing an instrument, to driving a car. A lot of people know how to drive a car, but the majority of people don’t know how the car works… So Music Theory is a lot like going under the hood of music and understanding how it works and the mechanics of all of it by expressing it as a language, writing it and interpreting it.”

Many students who are attracted to Music Theory courses are involved in music programs both inside and outside of South, which often results in the students having prior knowledge of the basic concepts taught in Music Theory 1, according to Toniolo. Shellard explains that, upon enrollment in Music Theory 1, students are given an entrance exam to determine which class is best suited for their music ability and that students sometimes skip the Intro Class and begin at Music Theory 2 or 3.

“One of the coolest parts about Theory is that the class really runs the gamut in terms of who’s in there,” Shellard said. “We have students who may have perfect pitch, which means you can hear a note and know exactly what note it is. [We] have students who are really proficient in piano, so those harmony skills come really naturally to them. We have students that are just enrolled in a band or orchestra or choir class, so they’re proficient or really skilled at their one instrument. [Then] we have students who aren’t enrolled in a music class at all in Glenbrook South, who may play guitar in a rock band outside of school, or who may do electronic music or something like that.”

According to Toniolo, though many students are at different levels within these classes, they typically all have a passion for music, which serves as a motivator. Additionally, Toniolo explains that students who excel in Music Theory frequently think in creative ways and utilize the ideology of, ‘many paths, same destination.’

“[One] thing that I think all of the students who are successful in Music Theory have in common is the ability to think about something in ways that they haven’t before,” Toniolo said. “There is something called neuroplasticity, meaning [that] the brain is never solidified in terms of the way that it thinks. You can always create new synapses, which are like pathways, for thought to happen. You can connect new things in a way that you haven’t before.”

For students thinking about a career in music, this class is highly beneficial, according to Shellard. Because it is offered as an AP course, this class provides collegiate insight that one would have to learn otherwise, giving students a head start if they familiarize themselves with the concepts early on. Additionally, for senior Aidan Celner, AP Music Theory student, this class has provided useful information in his desired career: music business.

“[Music Theory] allows me to figure out if something is wrong,” Celner said. “For example, if I was to be in the studio with an artist trying to figure out how to make their music better, I think [skills gained in this class will] be really beneficial because it will save time.”

Celner explains that one of the greatest challenges in this class is actually making music, once the terminology and other skills are mastered. Additionally, Celner says this class allows students to analyze their favorite works to a different degree than they would as a casual listener.