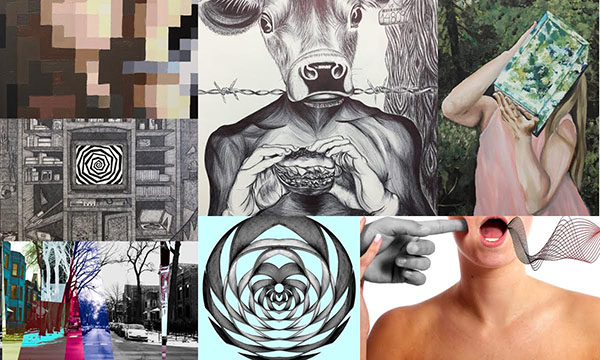 APPLAUDABLE ART: Displayed in the SAC during the week of April 23, AP Art students presented their concentration portfolios, a collection of 12 pieces centered around a single theme. Shown above are works from seniors (clockwise from the image in the bottom left) Sam Parsons, Eddie Loughran, Rachel Meyer, Meghan Zeivel, Lindsay Lathrop, Amanda Sideris and Jacquelyn Carter. Photos courtesy of Stephanie Fuja

As students entered the SAC to witness the AP art show during the week of April 23, they were met by the collage of colors and patterns displayed by the artwork. According to art teacher Stephanie Fuja, the projects displayed in the art show are called concentration portfolios, a college board requirement for AP art. The concentration portfolio is a year-long project where students create 12 pieces centered around a theme. Fuja emphasized the long and detailed process of choosing a topic including a summer assignment and two months of brainstorming at the beginning of the year.

Students taking AP art also emphasized the difficulty in choosing and committing to a topic for the entire year. Senior Riley Gunderson used photography, drawing and painting to abstractly represent her move from New York to Chicago during her sophomore year. Although Gunderson enjoyed the creative freedom this project allowed, she explained that she did have some difficulty sticking with this concentration.

“I’m someone who usually does one thing and then moves onto another thing and for this you have to stay within the same concentration or theme for 12 pieces which takes all year; it was hard committing to an idea for that long,” Gunderson said. “You have to keep each piece cohesive so it looks like the other pieces and that was definitely a challenge for me to keep it all similar without getting bored.”

According to senior Sam Parsons, the fact that this project was so specific and personal to the artist made it more impactful for students in the class. His concentration was using photography to represent mental illness. Parsons said that positive feedback from people who actually suffer from a mental illness was particularly meaningful.

“I’m not affected by mental illness personally, but [I] know those around me [are], and just being able to see this come together in such a way and having people who are affected by [mental illness] tell me how [accurately] I portrayed some of the things was really gratifying and showed that I had done my research and made sure that it was what I was trying to portray,” Parsons said.

According to senior Eddie Loughran, audience feedback was an important part of this project. He mentioned that people even asked if they could buy his art. Fuja spoke about the journals left by each artist’s project at the show, which gave students in the audience opportunities to comment about the art, which she believes to have had an impact on the artists.

“They love to get feedback on their hard work,” Fuja said. “They put a whole years worth of work into it, tons of hours per piece, and to see what the viewers think and what their peers think and what people coming to the show think is almost like validation for their hard work and it’s a really good, warm feeling to read those comments and to just see that people really appreciate what they are putting out there.”

Although this project was very individually based, the AP art class had a community and collaborative feel. Gunderson emphasized the close relationships she made with her classmates.

“We’ve all gotten really close because you’re spending so much time with each other,” Gunderson said. “We always ask for each other’s opinions on our pieces or if we have ideas for someone or if we come across an artist that someone else would like we share it with them, so I think it was just a really good environment. I got to meet people that I probably wouldn’t have met otherwise.”

Even though this is an art project, students learned more than just art skills. Fuja believes that this project taught students many important life lessons that they could use beyond their art.