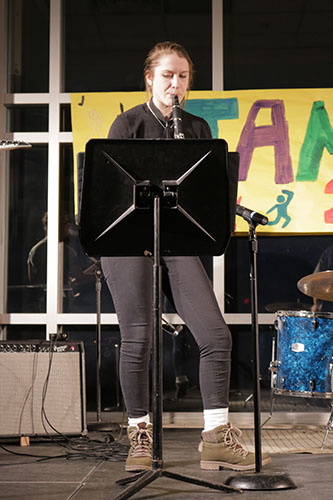 KIRBY IS KILLING IT: Standing on the stage at Jamnesty, Senior Erin Kirby plays her clarinet. Kirby also taught herself how to play the alto saxophone her freshman year.

As students journey through their day to day lives, music seems to have a constant presence. Whether they are a musician or just a fan, whether they are roaming the halls at school or driving to an extracurricular activity, students are constantly listening to and humming along to their favorite songs. At South, several students have furthered developed their passion for music by teaching themselves to play instruments.

Sophomore Jessica Friedman first taught herself how to play guitar at the age of eight. Friedman said she became interested in playing guitar because she wanted to play along with the songs she enjoys.

“I decided to learn [the guitar] because I was really interested in learning how to strum along with a beat so I could sing and play multiple songs that I knew,” Friedman said.

To learn the guitar, Friedman used several methods including watching DVDs, practicing with other people who play and listening to a song and attempting to play what she was hearing. Friedman expressed that there was some difficulty with memorization during her learning process, but she said she found this challenge taught her perseverance. According to Friedman, continual practice was an important aspect of the learning process and she recommends that students interested in teaching themselves an instrument allow themselves a lot of time for practice.

“I would say if they’re interested they should definitely keep trying and just make sure they practice a little bit every single day and they will eventually get it,” Friedman said.

Another student who taught himself how to play an instrument was freshman Danny McNeela. In March of 2017, Danny began teaching himself how to play his dad’s guitar. McNeela says as he got better at the guitar he began playing other similar instruments including the bass guitar, the ukulele as well as the mandolin. McNeela says he taught himself by looking up chord charts and memorizing different chords, despite finding this memorization to be difficult at times.

“For the guitar, I would say [the most difficult part of learning this instrument] was a combination of remembering the chords and moving your fingers there quickly enough because the whole point is to not have a lot of delay between the chords,” McNeela said. “That’s one of the basic fundamentals and it was really hard for me to remember where my fingers were supposed to go.”

Even through these difficulties, McNeela continues to teach himself the guitar. After about a year of playing, McNeela believes he has learned a lot, but still has a lot to learn.

“I definitely have a long way to go for every instrument I play,” McNeela said.  “I’m alright at everything, but I could get better. I’m in a band with a couple of my friends, one of them who plays guitar, and I play rhythm guitar for background and I always want to get better to increase the quality of music.”

Similarly to Friedman, as a tip for other musicians trying to teach themselves instruments, McNeela recommends that they do not give up, even when they feel challenged. McNeela believes that his experience in teaching himself an instrument  taught him the importance of perseverance.

“[Teaching myself an instrument] increased my perseverance and determination because it’s not as easy as people think to play an instrument,” McNeela said. “You know, it doesn’t just happen overnight, so I think really if you put your mind to anything you’ll be able to do it.”

Another self-taught musician is senior Erin Kirby who taught herself how to play the saxophone, specifically the alto sax, starting her freshman year. Kirby said that she decided to learn the alto sax so she could join South’s jazz band.

“I’ve been playing clarinet for ten years and I wanted to do jazz band in highschool,” Kirby said. “You’re not allowed to do clarinet as a main instrument, so I had to learn saxophone. I had to learn that on my own time and I had to do a bunch of arpeggios and different etudes to try and get my skills up to the bar.”

“I talked to my brothers and got techniques from them because the embouchure is a little more open and more deep throated than a clarinet’s very focused embouchure,” Kirby said. “It was a process of me trying to develop a more deep throat because it’s really hard to get low notes.”

Through the experience of teaching herself a new instrument, Kirby realized that it was not very difficult to pick up other instruments in similar fields. She said that in the future, her goal is to learn more woodwind instruments, including some that involve different techniques than those she already knows.

“I really hope to learn how to play on an obo or a bassoon because they’re a double reed instrument,” Kirby said. “It’s a different embouchure that they use and its just a different feel.”