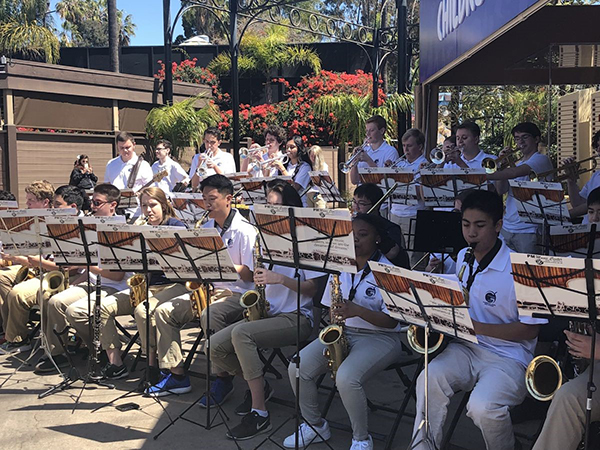 MASTERFUL MUSICIANS: Focusing intently on their music, the GBS Jazz Band plays at the San Diego Zoo. Along with the zoo, the band played at a number of San Diego landmarks including the USS Midway and the Spreckels Organ Pavilion, according to co-band Director Aaron Wojcik.

Senior Erin Kirby, jazz band member, sat watching firework after firework explode in the sky with all her friends at Disneyland. The Jazz Band had finished all of their performances for the week, according to Kirby, and could now relax. Kirby says San Diego was a trip she would never forget.

Co-band Director Aaron Wojcik says that the trip was based around three performances: the San Diego Zoo, where they were the first group to perform in over 30 years; the USS Midway, an aircraft carrier that is now a museum; and the Spreckels Organ Pavilion, which was set up as a concert hall.

According to Kirby, her favorite performance was at the USS Midway because it was unique, as they played on the flight deck. Kirby says playing on this piece of history was a once-in-a-lifetime experience.

“The veterans [at the USS Midway were] super appreciative of us,” Kirby said. “It’s nice to know that you’re spreading goodness and joy to people simply through the music you play.”

According to junior Rhea Shah, the best part about the trip was spending time with her friends in the band. Shah says it was a nice break but also fun to perform.

“The trip provides a nice opportunity for members of the band to get to know each other better,” Shah said.

According to Wojcik, for a trip like this, everything needs to be planned out in order to give the students the best trip possible. With that said, they were also given a lot of free time, according to Wojcik, like their visit to Disneyland.

“We would not be able to travel if we didn’t have very trustworthy, dependable students who are accustomed to traveling and know how to do it,” Wojcik said. “Having students who represent the school well is the only way we’re able to do it.”

Kirby says that different venues allow for an enhanced experience. Visiting places you never would go otherwise and performing music is special, according to Kirby.

“We were the first band to perform at the San Diego Zoo in over 30 years, and now they’re inviting people back to play because we had a good performance,” Kirby said.

Throughout the trip, students experienced once-in-a-lifetime events together, according to Wojcik. Wojcik says they then came back to Glenview with those shared memories, bringing the band closer together.

“When you walk away from anything, you tend to remember the best, most memorable moments,” Wojcik said. “Having the opportunity for the kids to go on that trip and remember those experiences is going to stick with them for the rest of their lives.”