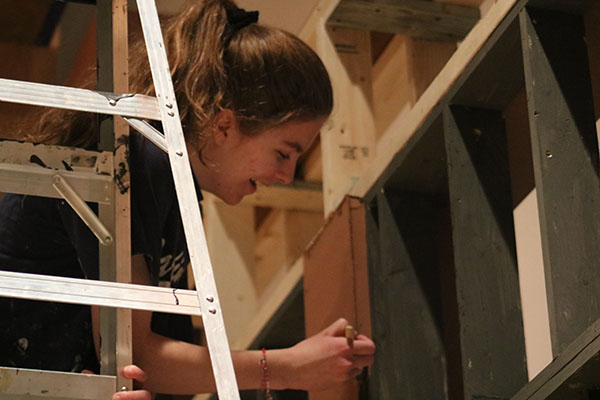 CREATIVE CONSTRUCTORS: Balancing on top of a ladder, sophomore Hannah Dobos carefully paints the background set. All students are welcome to participate in set construction along with South’s Stage Crew.

A blue curtain slowly rises, revealing the seemingly endless darkness of the stage. Suddenly, light illuminates the stage, exposing South students from every corner of the school. From dancing to magic tricks, The Variety Show, most commonly known as the V-show, exhibits all the talents the many students at South have to offer and will be showing Feb. 21-24. Both the students and faculty work hard to create a three-day production for students, teachers, and families.

Shellard said, “I think this year we were striving for something more tangible, a word that people knew or a phrase that was recognizable to students that they could relate with or understand how the theme applies. We found the word “Found” and how it related really nicely to some things that we wanted to stress in this year’s V-show, mainly identity and a sense of belonging or a place of home.”

“I think I bring to the table a lot of different viewpoints, having been in pit band, backup singers, singer-dancers and variety acts,” Shellard said. “I kind of have the lens of many different areas of the variety show, which I think helps me as a director to think for all those different areas, rather than just as a vocal teacher.”

This year, South is involved in the Identity Initiative, which is a school-wide program to promote student and faculty identities. This initiative has created projects in many departments and extracurricular activities. According to Shellard, this initiative is something that was considered when choosing the theme. Andrew Toniolo, the vocal director of V-show, said the theme “Found” is a great connection to this idea.

Toniolo said, “Based on what the entire school [and] school district is trying to do with [the Identity Initiative], I think “Found” is a perfect theme to line up with the overall theme of identity. There are a lot of really creative avenues that you can take with the theme of ‘Found’.”

Shellard said that preparation and professionalism played a large role when the panel was deciding which acts to include. Furthermore, Shellard said it was important for all the acts to go well together. According to Shellard, a goal of this year’s variety show is to reveal aspects of students that their peers may not have been previously aware of.

“I hope that both students and audience members can find something in the show that they relate with and that they connect to,” Shellard said. “[Relatability] is something that we’re really striving for this year. And then also find something that to them they didn’t know that it was coming, they wouldn’t have expected their peers or their fellow classmates to do something like that.”

According to Toniolo, a major difference between this V-show and ones of the past is that there are several new staff members who will give the V-show a new perspective. Toniolo said he is excited to witness and take part in these new changes.

Even with the staff changes that have occurred, Lampert explains that many aspects of the V-show will remain the same as in years past. Many of the popular acts, including drumline, football, TV and the staff act will still be included in the show, Lampert said.

“Honestly, I don’t think it’s going to be drastically different,” Lampert said. “As we have a new creative team, we know the V-show is great and we know it works, so we’re really just going to kind of keep it similar and showcase the student talent as much as we can, without making any significant changes. It’s going to be a wonderful celebration of the students at Glenbrook South.”

The directors say that variety was important when deciding upon the acts in the V-show. According to Koo, his goal is to include even more diversity in the V-show in upcoming years.

“I’m really hoping that we really infuse more variety,” Koo said. “I don’t want the whole show to be all song and dance. I want the show to really show the students’ abilities and creativities beyond a fine arts perspective. If they have skills or talents, I want that to be shown onstage to the community.”

Many students who are involved in V-show have found it to be a rewarding experience. Junior Stephanie Ornduff, who is involved in singer-dancers, Chamber Singers and a tap dancing act, said that V-show has made a huge impact on her experience at South. She explained that she has made many close friends and gained confidence by being a part of V-show.

“I would actually consider V-show one of my favorite things that I do here, if not number one,” Ornduff said. “I’ve always been pretty involved with it since freshman year, and it almost gives me a sense of confidence. Performing is a little scary sometimes, but when you’re doing it with your friends and you’ve practiced for so long and worked so hard, you just have that confidence when you come out on stage and have a great show.”