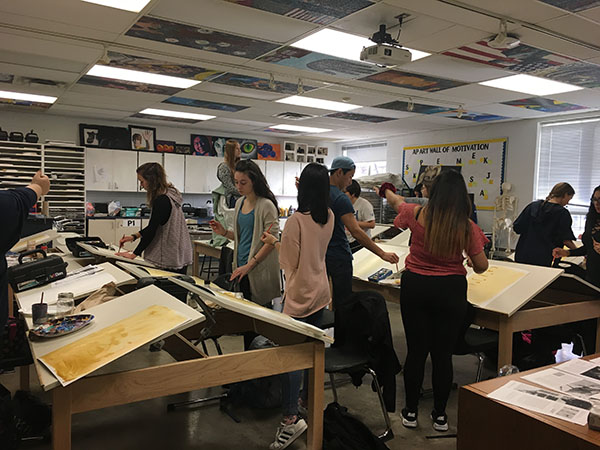 MODEL MANIA: Painting on canvases, students partake in a real life modeling project last year. Each student is able to depict the model in their own style. Photo courtesy of Stephanie Fuja

Students circle up and begin painting the model in front of them. Tensions are high, as they only have five minutes to complete their work. However, amidst the chaos, junior Chloe Costigan can hear the music playing in the background and see the collaboration amongst students. She feels the studio-like vibes of the classroom and finds a newfound appreciation for the peacefulness of the modeling project. The general idea of the project is that the students form a circle around a model, who they paint on canvases, according to Costigan.

According to art teacher Stephanie Fuja, the idea of the Painting 2 class is that students get very broad prompts and are able to use their imagination to create what they want within the guidelines. It is directed towards idea development because the students are able to take projects in the direction that best suits their artistic style.

“The point of the class is to really develop [each student’s] own artistic painting style and for them to become their own artist,” Fuja said.

Fuja says she started the modeling project at South last spring. According to Fuja, this project is much different from any other projects they do in the class because it is painting from real life, which is a whole different ball game than painting objects in a still life.

“You are not just going off a picture or from your head, you are looking at a real live person and painting them, and it’s very challenging,” Fuja said.

According to Fuja, students have to do specific measurements with sticks and their arms in order to understand how to measure the full body length. It’s very hard to translate all these measurements onto a canvas, Fuja said.

“Looking at someone in real life and painting them in the correct proportions is probably the most challenging part,” Fuja said.

According to Costigan and junior Olivia Wilas, the hardest parts of the project were being timed and figuring out proportions. According to Fuja, it’s not normal to see this kind of project in a high school setting because it is college level work.

“[Students] found [the modeling project] interesting and different, which made it more exciting for [the students],” Fuja said. “They did say it was really hard and challenging, but they like the challenge.”

According to Costigan, the project was difficult because in order to get the proportions right, she and her classmates had to measure how big the different body parts were by holding their arms up and basing them on the size of their thumbs.

“It was very interesting to see that no matter who your subject was, all their proportions were generally the same,” Costigan said.

According to Wilas, the modeling project is very different than any other projects they do in that class because it is timed and they paint on cue.

“I thought it was interesting because everyone has a different style, and you could see all the finished products right when they finish,” Wilas said.

Costigan enjoyed multiple aspects of the project, which she says helped her develop a style within her painting and also better understand proportions.

According to Fuja, the fact that the students were all collaborating and sitting in a circle with their model in front of them created the vibe of a real studio. Costigan says that looking around the room in order to see what others were painting gave her insight on which techniques she should use in her own work.

“It gave [me] inspiration because everyone had their own style,” Costigan said.