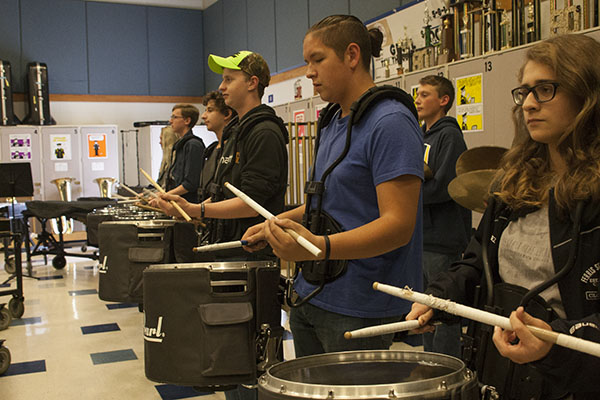 The powerful drum beats echo throughout the room. With each unified burst of sound, the excitement within the student body grows. This group of percussionists work hard to entertain and support South.

Drumline is a smaller group in the band program that focuses solely on percussion instruments. According to co-band director Brian Boron, 17 members are chosen in order to achieve the best balance of sound. He believes the drumline to be a hardworking group of kids.

“They have to be willing to work hard,” Boron said. “It’s a tough job to do. It’s very team oriented and there’s a very strong community in the drumline.”

Drumline performs at many events in an attempt to express the Titan spirit, according to senior Spencer Peterson. He explained that drumline has inspired many students to pursue their passion of music including himself.

“I’ve seen the drumline before when I was younger at football games and I thought it was really cool,” Peterson said. “[Since] I was a drummer, I thought, ‘Maybe I could do that.’”

Drumline is the only auditioned group in band and according to drum captain Michael Vilches this places a lot of responsibility on its members. Vilches says drumline has been rewarding as it has given him a sense of discipline.

“In this day and age there’s a lot of kids that mess around, but I feel like once you enter the world of drumline and music … there’s a sense of structure and you feel more confident when you come out,” Vilches said.

Vilches emphasizes how close of a group they are and how much time they spend together both inside and outside of school. He says that drumline is like a big family who come to each other when they need support.

“The group is different because it’s more than just playing with people you know, it’s your friends,” Vilches said. “All those guys and girls in there, everybody in there, I would take a bullet for because they’re my friends and ultimately my brothers and sisters.”

Junior Morgan Keime was influenced to join drumline by her older brother Taylor, who was drum captain last year. Keime says that drumline has given her an experience she will never forget.

“The memories that you make are probably the best part of it … because they last forever,” Keime said. “I made so many friends through it and it might take a lot of time but in the end it’s worth it.”

“I’m going to apply to be a section leader because we haven’t had a girl drum captain in years, if ever, so I’m going to definitely try and change that,” Keime said.

Similarly,Vilches has noticed an increase in girls joining the group with about an equal number of boy and girl members this year.

“It has mostly been a boys club but we have definitely noticed a change and that’s cool because we’ve always been trying to get more [girls] involved,” Vilches stated.

“I hope they keep building their skills and recruiting new members,” Boron said. “I’d love to see it grow because it’s really a good place to be.”